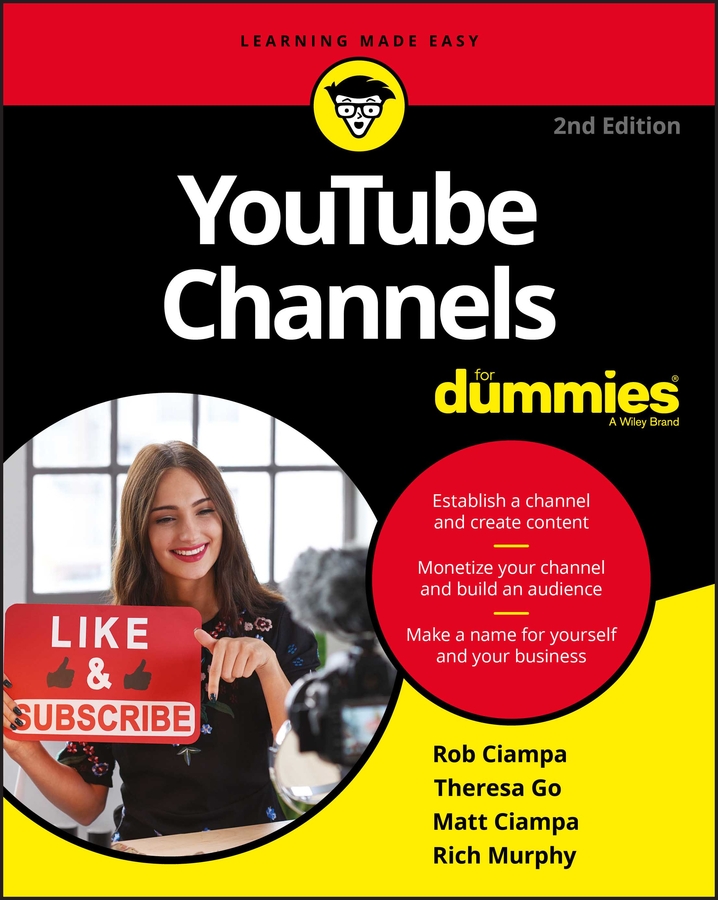 YouTube has hundreds of millions of channels, with over two million of those receiving new, uploaded content on a regular basis. Discovering which of those channels are relevant to you may take some time. Take a look at these ten unique, but very good channels that are worth your attention. You’ll quickly see that no two channels look alike, but they do share some common ingredients, including great content, consistent publishing schedules, audience engagement, and video SEO.

You will find some well-done YouTube tutorial content, along with great educational material, cool products, innovative business approaches, and witty takes on contemporary culture. And of course there’s beauty. Whether you apply makeup or not, all YouTubers can learn a great deal from the beauty industry and its vloggers.

Behind his warm personality and self-deprecating style, Derral Eves is one of the foremost YouTube experts and evangelists. Derral is a worldwide consultant and trainer on video marketing. Even with a busy schedule, he is able to produce informative, well-branded content for his channel on a regular basis. When YouTube makes changes — which is more of the norm than the exception — Derral is one the first to describe the changes and decipher what it means for YouTube creators and channel managers. This is a great channel for staying current with your YouTube expertise.

Like Derral Eves, Tim Schmoyer, founder of Video Creators, is a proud family guy with contagious passion for YouTube. Tim is often found at major video marketing events with camera in hand, filming the leaders in online video. He also spends a great deal of time with innovative creators and accomplished channel managers, combining their knowledge and his expertise into some rather compelling content. Video Creators is a big picture view of YouTube, covering topics from the nitty gritty basics all the way to strategic considerations for your channel and content.

One would think that YouTube superstar brothers John and Hank, the guys behind Vlogbrothers, would lose a step or two because of their fame and success. Not a chance. The original videobloggers (and founders of Vidcon plus half a dozen other strong channels) have been sticking to their YouTube channel's premise (one brother videoblogging to the other, every week on Tuesday and Friday) for over seven years now. The topics are always fresh, the production values are simple but effective. The Green Brothers probably have one of the strongest communities on YouTube, and though the channel may now and then be a bit hard to understand for outsiders, it’s still utterly fascinating.

Today, the world is dominated by electronic gadgets that’s only getting more cluttered by the day. What’s the consumer to do? Go to YouTube of course and see what Marques Brownlee has to say. YouTube has become the go-to place for consumers deciding what to buy and the consumers are turning to trusted, independent YouTubers such as Marques Brownlee for guidance. Known by his fans as MKBHD, he has been uploading great gadget reviews since 2009 and is widely regarded as one of the best gadget reviewers. What works for this channel? A single host who is clearly opinionated, yet balanced in his perspective. He delivers good production value with just the right level of detail for the audience.

Entrepreneur Bryan Elliott left behind the comforts of a major Hollywood studio job to start his own production company. Along the way, he encountered many of the challenges typically faced by anyone starting his or her own company: scarce resources, getting up to speed with new technologies and new approaches, and staying inspired. In 2009, he decided to create Behind the Brand, a YouTube channel with content that addressed the hurdles he faced. He built the channel assuming there was probably a lot of people just like him — entrepreneurs, start ups, small business people — who could benefit from his experience. Along the way, he created a one-stop-shop where people can gain insights from one of the best business minds on the planet.

Who doesn’t love Sesame Street? The classic, long-running children’s television show has educated preschoolers — and many of their parents — for over forty years. Sesame Street has always been (and continues to be) an innovator in programming, so it’s no surprise that they embraced YouTube. A smart move, too, because tablets and mobile devices have proven to be a popular viewing device for kids. Their YouTube channel has great content organization, carefully crafted thumbnails, and end cards. Fresh content almost every day certainly helps. Also, they have Cookie Monster. Now that’s a YouTube personality!

The School of Life

This is an interesting example for how you can always find a niche on YouTube if you target the right audience and produce good content. The School of Life is about using culture to help develop skills, such as emotional intelligence, which are not taught in a conventional classroom. It’s a pleasingly cerebral concept tied to an interesting London-based store founded by philosophy pop star Alain de Botton. The School of Life has an interesting, yet highly-produced content mix.

Beauty is a really big deal on YouTube. It wasn’t those big brands in glamor magazines that led the YouTube charge; it was the beauty vloggers who became the queens of YouTube. i love makeup, affectionately known as “ilm,” raises beauty on YouTube to a whole new level by bringing beauty personalities, comedians and lifestyle gurus together in a highly-entertaining channel with its own independent branding. ilm built a large audience with a consistent publishing schedule and popular line up of vloggers. Worth a subscription if you like seasonal and detailed makeup tutorials.

Chanel, world famous for its clothing, eyewear, fragrance, jewelry, and watches, invests heavily in its brand on YouTube. It tastefully blends quality video production with high fashion content. Chanel’s popularity comes from a trusted brand that produces a variety of quality videos, including fashion shows, makeup tutorials and commercials. Chanel leverages YouTube as a place to upload complementary content as well, including "making of" and "behind the scenes" versions of their popular commercials. It’s worth a subscription if you want to keep up on fashion and know what Giselle Bündchen is doing when she gets out of the ocean.

Generations of people have been in love with the Ford Mustang, one of the most iconic cars in the automotive industry. It should be no surprise that cars do stir up emotions and there’s not better web property than YouTube to channel those emotions to viewers. For the Mustang, Ford’s put together a great video series (mini stories), using in-motion players at the end of each video to link up the stories. The cool thing about the channel is that these videos are only intended for the YouTube channel, not TV. (Ironically, the commercial that runs on TV acts as a trailer for the YouTube channel.)