Scatter Plot Matrix in Base R

Explore Book Buy On Amazon
Base R provides a nice way of visualizing relationships among more than two variables. If you add price into the mix and you want to show all the pairwise relationships among MPG-city, price, and horsepower, you'd need multiple scatter plots. R can plot them all together in a matrix, as the figure shows. 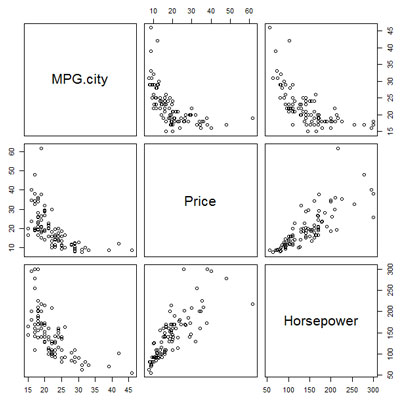 Multiple scatter plots for the relationships among MPG-city, price, and horsepower.

The R function for plotting this matrix is pairs(). To calculate the coordinates for all scatter plots, this function works with numerical columns from a matrix or a data frame.

For convenience, you create a data frame that's a subset of the Cars93 data frame. This new data frame consists of just the three variables to plot. The function subset() handles that nicely:

cars.subset <- subset(Cars93, select = c(MPG. city,Price,Horsepower)) The second argument to subset creates a vector of exactly what to select out of Cars93. Just to make sure the new data frame is the way you want it, use the head() function to take a look at the first six rows:

This capability isn't limited to three variables, nor to continuous ones. To see what happens with a different type of variable, add Cylinders to the vector for select and then use the pairs() function on cars.subset.

If you get tired of typing the $-signs, here's another way:

With the arguments laid out as in either of the two preceding code examples, plot() works exactly like boxplot().