A scatter plot (also known as a scatter diagram) shows the relationship between two quantitative (numerical) variables. These variables may be positively related, negatively related, or unrelated:

The scatter diagram in the figure shows the relationship between the monthly returns to Microsoft stock and the Standard & Poor’s (S&P) 500 Index from 2008 to 2012: 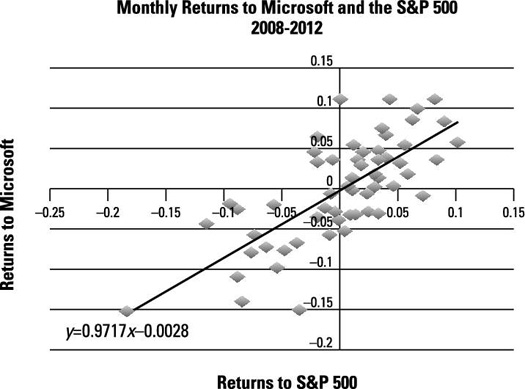 Each point on the graph represents the return to Microsoft stock and the return to the S&P 500 Index during a single month. The general direction of these points is from the lower-left corner of the graph to the upper-right corner, indicating that the two variables have a positive relationship.

In the case of Microsoft and the S&P 500 Index, the equation of the trend line is

In this equation, –0.0028 is the intercept (where the trend line crosses the vertical axis) and the slope is 0.917 (how much y changes due to a change in x).