How to Use Transition Matrices

Explore Book Buy On Amazon
If your finite math instructor asks you to predict the likelihood of an action repeating over time, you may need to use a transition matrix to do this. A transition matrix consists of a square matrix that gives the probabilities of different states going from one to another.

With a transition matrix, you can perform matrix multiplication and determine trends, if there are any, and make predications.

Consider the table showing the purchasing patterns involving different cereals. You see all the percentages showing the probability of going from one state to another, but which of the cereals does the consumer actually end up buying most frequently in the long run?

One way to look at continued purchasing is to create a tree diagram. In the following figure, you see two consecutive “rounds” of purchases. 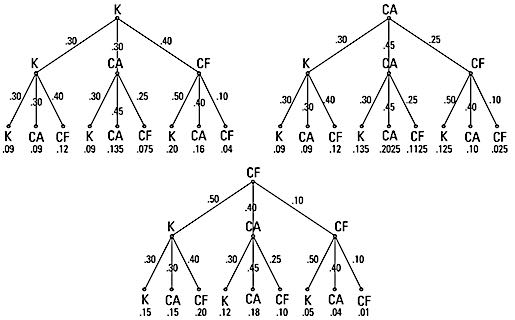 Which kind of cereal will the consumer buy?

The tree is helpful in that it shows you what the choices are and how the percentages work in determining patterns, but there’s a much easier and neater way to compute these values.

To perform computations and study this further, create a transition matrix, referring back to the chart showing purchases and using the decimal values of the percentages. Name it matrix C.

In a matrix A, the element in the nth row, kth column is labeled ank.

So, you take the first row of the left matrix times the first column of the second matrix to get

Yes. This is the same computation as was done using the tree to find the probability that a consumer starting with Kicks would return to it in two more purchases.

Performing the matrix multiplication, you have

Continuing this multiplication process, by the time C6 appears (the chances of buying a particular cereal at the fifth purchase time after the initial purchase), a pattern emerges.

Notice that the numbers in each column round to the same three decimal places. This is going to become even clearer, using higher powers of C, until some nth matrix power becomes

The matrix shows you the pattern or trend.