Plotting t in Base R Graphics

By: Joseph Schmuller and
Updated: 07-05-2017
From The Book: Statistical Analysis with R For Dummies

Explore Book Buy On Amazon
Visualizing a distribution often helps you understand it. The process can be a bit involved in R, but it's worth the effort. The figure shows three members of the t-distribution family on the same graph. The first has df = 3, the second has df = 10, and the third is the standard normal distribution (df = infinity). 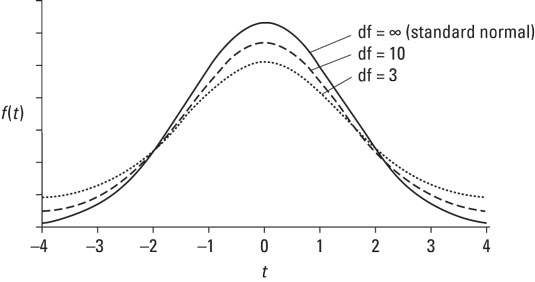 Some members of the t-distribution family.

With either base R graphics or ggplot 2, the first step is to set up a vector of the values that the density functions will work with:

With grDevices installed, this adds the infinity symbol to a legend:

expression(infinity) Begin with the plot() function, and plot the t-distribution with 3 df: 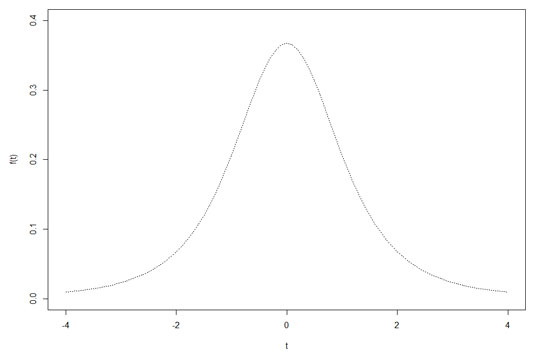 t-distribution with 3 df, base R.

The next two lines add the t-distribution for df=10, and for the standard normal (df = infinity):

The line for the standard normal is solid (the default value for lty). This figure shows the progress. All that's missing is the legend that explains which curve is which. 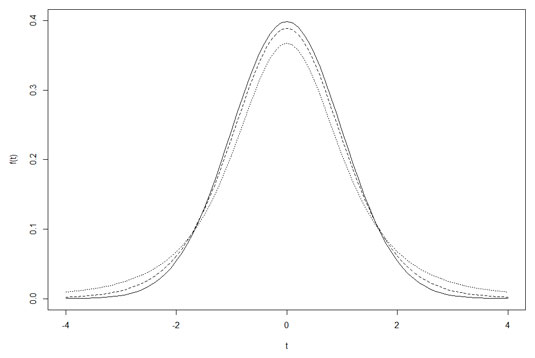 Three distributions in search of a legend.

One advantage of base R is that positioning and populating the legend is not difficult:

legend("topright", title = "df",legend = c(expression(infinity),"10","3"), lty = c("solid","dashed","dotted"), bty = "n") The first argument positions the legend in the upper-right corner. The second gives the legend its title. The third argument is a vector that specifies what's in the legend. As you can see, the first element is the infinity expression, corresponding to the df for the standard normal. The second and third elements are the df for the remaining two t-distributions. You order them this way because that's the order in which the curves appear at their centers. The lty argument is the vector that specifies the order of the linetypes (they correspond with the df). The final argument bty="n" removes the border from the legend.

And this produces the following figure. 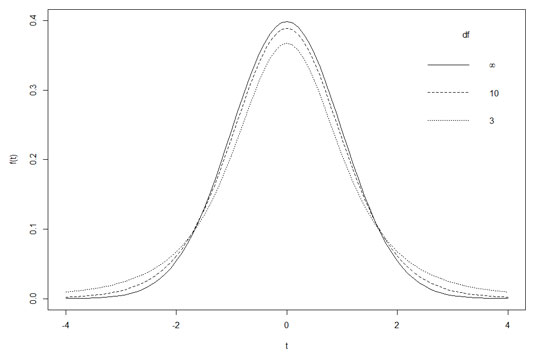 The final graph, including the legend.