R Project: Combining an Image with an Animated Image

This image shows the end product — the plot of the iris data set with comedy icons Laurel and Hardy positioned in front of the plot legend. When you open this combined image in the Viewer, you see Stan and Ollie dancing their little derbies off. (The derbies don’t actually come off in the animation, but you get the drift.) 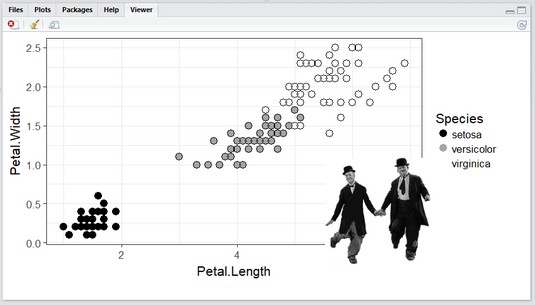 Laurel and Hardy, dancing in front of the legend in the iris plot.

Getting Stan and Ollie

Check out the Laurel and Hardy GIF. Right-click the image and select Save Image As from the pop-up menu that appears. Save it as animated-dancing-image-0243 in your Documents folder.

Then read it into R:

Applying the length() function to l_and_h

indicates that this GIF consists of ten frames.

To add a coolness factor, make the background of the GIF transparent before image_read() works with it. This free online image editor does the job quite nicely.

Combining the boys with the background

If you use the image combination technique, the code looks like this:

The picture it produces looks like the image above but with one problem: The boys aren’t dancing. Why is that?

The reason is that image_composite() combined the background with just the first frame of l_and_h, not with all ten. It’s exactly the same as if you had run

To get this done properly, you have to use a magick function called image_apply().

So that you fully understand how this important function works, let's describe an analogous function called lapply().

For technical reasons, it’s faster and more efficient to use lapply() to apply mean() to all the variables:

A warning message comes with that last one, but that’s okay.

This second way comes in handy when the function becomes more complicated. If, for some reason, you want to square the value of each score in the data set and then multiply the result by three, and then calculate the mean of each column, here’s how to code it:

After you run that code, length(frames) verifies the ten frames:

Getting back to the animation

The image_animate() function puts it all in motion at ten frames per second:

To put the show on the screen, it’s

And that’s the code for the image above.

One more thing. The image_write() function saves the animation as a handy little reusable GIF: