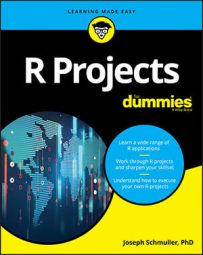 Explore Book Buy On Amazon
One benefit of Rattle is that it allows you to easily experiment with whatever it helps you create with R. Here’s a little project for you to try. You’ll learn more about neural networks if you can see how the network error rate decreases with the number of iterations through the training set.

The measure of error for this little project is root mean square error (RMSE), which is the standard deviation of the residuals. Each residual is the difference between the network’s decision and the correct answer. You’ll create a vector that holds the RMSE for each number of iterations and then plot the vector against the number of iterations.

So the first line of code is

Next, click the rattle Log tab and scroll down to find the R code that creates the neural network:

The values in the data argument are based on Data tab selections. The skip argument allows for the possibility of creating skip layers (layers whose connections skip over the succeeding layer). The argument of most interest here is maxit, which specifies the maximum number of iterations.

Copy this code into RStudio.

So the general outline for the for-loop is

(This for-loop might take a few more seconds to run than you’re accustomed to.)

Finally, use the plot() function to plot RMSE on the y-axis and to plot iterations on the x-axis: 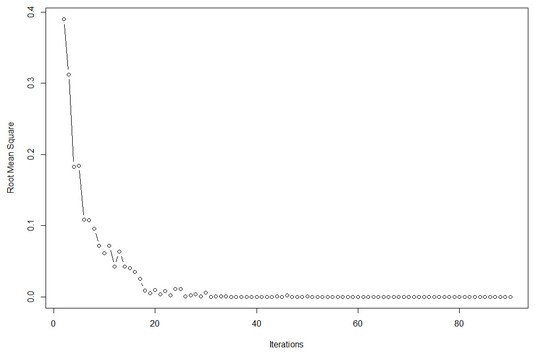 Here’s one more suggested project: Take another look at the code for creating crs$nnet. Does anything suggest itself as something of interest that relates to RMSE? Something you could vary in a for-loop while holding maxit constant? And then plot RMSE against that thing? Go for it!