Explore Book Buy On Amazon
John Madden Football debuted in 1988 as an Apple IIe game (see the following figure). The game didn’t gain wide recognition until 1990, when John Madden Football was released for the Sega Genesis and Super Nintendo consoles. In 1990, the Madden game for Genesis was considered the first “killer app” for that generation of the console wars, ranking as one of the highest-rated and highest-selling titles for the life of that console. 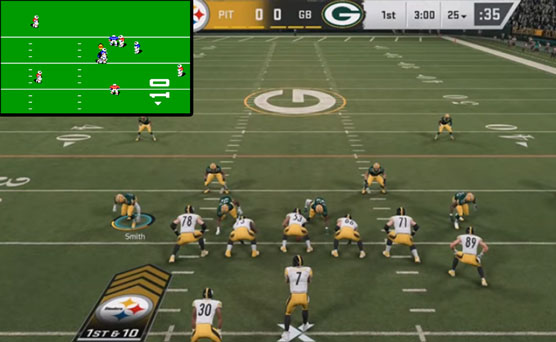 Madden rose to the top of the football gaming pile for two reasons. First, it was fully licensed with the NFL; second, John Madden, a Super Bowl–winning coach and well-known sports commentator, gave the game not only a celebrity name but also access to his understanding of how football playbooks worked, helping to implement that knowledge in video game form. The Madden series became the football game that could simulate real football, though the 1990 version was nowhere near the level of the game’s artificial intelligence and the mechanical polish that the 2019 version offers.

Having the only license in town

In 2020, Madden NFL 20 is the only title that has the NFL and NFL Players Association (NFLPA) license. Having this license means that although other companies might try to make a football game, Madden is the only one that can have the actual NFL teams, players, and stadiums. It makes Madden and EA Sports the only game in town.

Possessing this license also highlights a way that Madden competition differs from other esports. In a Madden competition, you play as an NFL team with an accurate roster. Although the game has a creation suite, competitions don’t welcome customized players or rosters. To compete, you need to understand the real-life counterparts to your in-game team, at least to some degree, because everyone that you use in-game is meant to perform in a way that corresponds to the way the players perform on the field. Madden even updates after each week of the season to tweak the ratings of players, move any player who was traded, and rotate injured players out of the play rotation.

Who is John Madden?

Although his last name has become synonymous with the EA Sports football game, contemporary fans might not know much about John Madden, the man behind the initial game. From a game-design standpoint, he pushed the field by insisting that programmers find a way to expand their early game prototype of 7-versus-7 players to 11 versus 11 so that it would look like real football, and he pushed for years to get realistic commentary — originally delivered by Madden himself — into the game so that it would, again, feel like real football. Here are some interesting facts about John Madden:

You can find local tournaments for Madden that have their own house rules, but the primary mode of competition for Madden is the standard mode in which each player picks an NFL team. Rosters update weekly during the actual NFL season and then lock, barring some major change that might result in an off-season update. From August through January, the game updates regularly, but from February through July, rosters remain generally unchanged.

The other popular competitive mode for Madden is the Madden Ultimate Team (MUT). This mode uses virtual card packs and allows players to collect and build teams in a style similar to deck building in a collectable card game like Magic: The Gathering or Hearthstone. This mode has a highly competitive online ladder mode and community, but using MUT as a drafting tool to build teams for competitions is also common. MUT has pay-to-win issues, though, because paying for packs will get a player better players, so no official tournaments utilize it as their actual competition mode.

You can find a number of EA Sports-sponsored Madden tournament events (the Madden Championship Series) through the webpage. Here you will find events like the following:

The Madden NFL Championship series is one of the largest sports simulation esports events in the world, largely as a result of the sponsorship of the event and EA Sports and the NFL’s partnership. The prize pool has exceeded $1 million each of the last two years, and major sponsors include Pizza Hut, Snickers, Starbucks, and Bose.

On August 26, 2018, a solo gunman opened fire during a Madden 19 video game tournament at GLHF (Good Luck, Have Fun) Bar in Jacksonville Landing, Jacksonville, FL. Three people died, including the shooter, who killed himself. Another 11 were injured. It was, to date, the only mass shooting associated with an esports event.

Two things make the incident particularly chilling. The first is that the shooter was a participant in the tournament, and after losing, he refused to shake the hand of his opponent and left the bar. He would return later, we now know, having retrieved a handgun from his vehicle. Witnesses say that he specifically targeted his first victim from a distance. Other participants claim to have seen the red dot of a laser scope on the chest of the first victim.

The other chilling element of the shooting is that it was witnessed live on the Twitch.tv streaming service because someone was streaming the tournament when the shooting took place. Although nothing of the shooting can be seen because the stream shows the game itself, the gunshots can be heard, as can the panicked reactions of several people before the feed cuts.

In the days, weeks, and months following the Jacksonville Landing shooting, numerous esports organizations and tournament organizers reconsidered security at events. As a result, most major events now include metal detectors, and participants have their bags searched before entering venues.