Esports: The Basics of the Fighting-Game Genre

Explore Book Buy On Amazon
Fighting games have a fascinating ecosystem. A massive number of titles have been created, and modifications and advancements have been introduced in various games during the 30-plus years that fighting games have been a part of the gaming world. The following criteria are essential to competition and are true of almost every fighting game: In the current esports world, you see essentially four types of fighting games: Each of the preceding styles of game has at least one popular representative in the fighting-games community, and many have great longevity or are parts of a multi-title series. In fact, at Evolution Championship Series (EVO) 2019, the nine-game slate hit on each style relatively evenly with long-time title representation, as shown in the following table. Among the nine games on the biggest fighting game stage at EVO were two 2-D titles, four 2.5-D titles, two 3-D titles, and one platform brawler (with the last not a surprise because only two major platform brawler games exist).

To state it as simply as possible, a 2-D fighting game has two-dimensional graphics and moves on a two-dimensional axis. This relationship is shown in the following figure, which is the start of a match in BlazBlue: Cross Tag Battle. Almost every 2-D fighter exists on a stage that works like a cartoon’s background. The player characters can move left and right through the stage, but at some point on each side, the stage ends. This boundary means that a character can be pushed up against a sort of invisible wall that is formed by the edge of the stage. 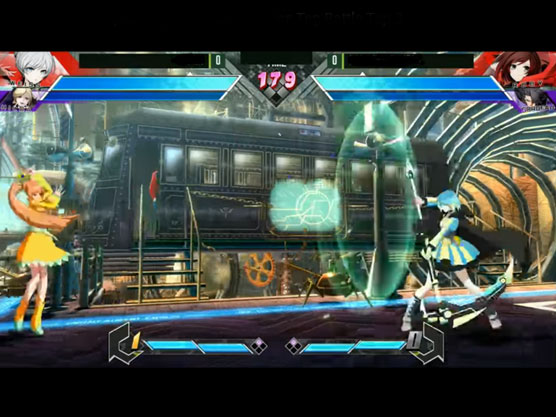 The start of a BlazBlue: Cross Tag Battle.

Many fighting-game purists favor 2-D fighters. In terms of gameplay, the two-dimensional play axis is still maintained by many fighting games, but keeping the older-looking, two-dimensional graphics lends a certain charm. It also results in sprite-based animations that opponents can read and anticipate in ways that that they can’t do sometimes with the motions of a 3-D model. More important, those sprite-based animations have to finish before new ones can start, meaning that a move that has a long animation has to happen and end before more actions can be input and completed, at least in most cases. This might seem like an unnecessary or minor detail to the casual player, but for pros, it can be the difference between perfectly blocking a powerful attack or taking a match-ending assault to the face.

2-D fighters also represent the origin point of the fighting game genre. Karate Champ was a 2-D fighter, as was Street Fighter (and Street Fighter II). In that sense, all fighting games that exist now borrow from the 2-D style and mechanics, and in fact a number of fighting-game innovations happened first in 2-D.

In 2019, SNK released an updated 2.5-D version of its 1993 hit Samurai Shodown (or Samurai Spirits in its native country of Japan). The original game was 2-D with pixel-art sprites, as you can see in the following figure. Mechanically, the game features fighters who almost all brandish weapons, primarily swords, and fight by charging forward and falling back in a 2-D side-scrolling environment. One of the worst possible things that can happen to a player is to be forced to the edge of the screen and up against the edge, which works like a wall. A player stuck there can be “juggled” by repeated attacks, with the edge of the screen allowing the opponent to essentially bounce the other player. 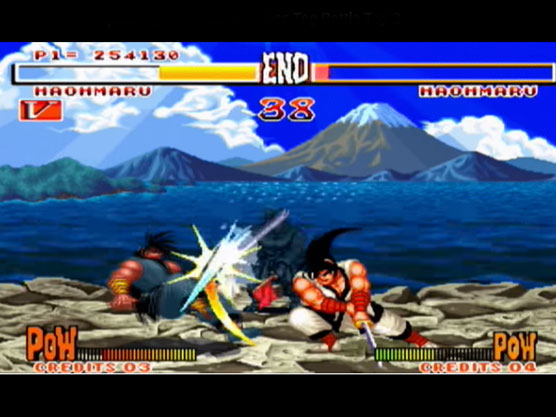 Two combatants about to fight in 1993’s Samurai Shodown.

The 2019 release of Samurai Shodown features 3-D graphics. That is, essentially, the only major difference in the two versions of the game. Other updates have occurred, of course — the game can be played online and will provide for downloadable characters and post-release balance that didn’t exist for the original — but the major update made the graphics and player models appear in a 3-D art style, as shown. The combat itself still happens on a two-dimensional plane moving left and right, and many of the characters have the same basic look and move sets. The merger of 2-D gameplay with 3-D art is the hallmark of a 2.5-D game. 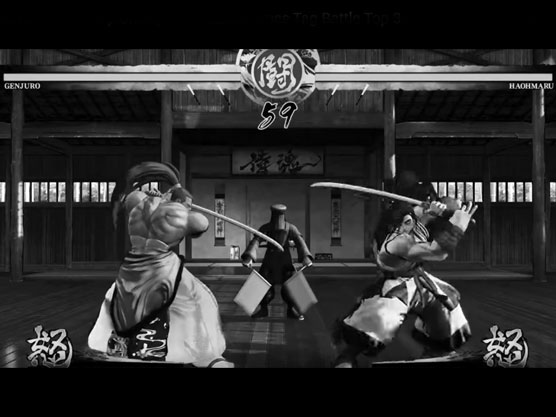 Two combatants about to fight in the 2019 update of Samurai Shodown.

The major advantages of 2.5-D are all about visuals. 3-D models take longer to create, but more parts can be reused and animations can be shared across multiple models. In the old 2-D sprite design style, a new sprite had to be created for each character and each potential motion. 3-D art also allows for higher resolutions and more realistic characters; sprite animation of photographs remains choppy and unnatural looking. In terms of gameplay mechanics, 2-D and 2.5-D are remarkably similar.

Stepping forward with the 3-D fighter

With the advent of 3-D game art and 3-D rendering, many games began allowing three-dimensional movement, with characters moving into and out of the screen.

Remember that 3-D in a game is not the same as a 3-D movie or picture. The third axis in these games doesn’t literally jump out of the screen. But the presence of a third axis does mean that actions can happen in directions other than left and right and up and down.

The first 3-D fighter was Sega’s Virtua Fighter (VF), which released in arcades in 1993 and later on the Sega Saturn console. The series was revolutionary in that it allowed for the characters to move at all manner of angles across a fighting arena that allowed the player to spin 360 degrees to view the entire space. Many versions of VF came about, and the series extended to a fifth installment with several mini-updates along the way. Though rarely seen in competitive play now, VF even had its day at EVO in the mid- to late 2000s.

Knocking people off the platform (brawler)

The final type of fighting game comes with a little bit of controversy. Among diehard fighting-game fans, the titles that fit the classification of platform brawler would not be considered fighting games. Their audiences and competitive player bases would disagree, however, and EVO has recognized Nintendo’s Super Smash Bros. (SSB) — the game that created the genre — for years.

What makes games like the SSB series different from other fighting games is that in addition to doing damage to each other, characters can win by knocking their opponent off the various platforms, or areas where players can stand, on the screen. These work in essence the same way a platform works in a game like Super Mario Brothers, in which missing a jump or being knocked off means that a player character falls to its death. Although the SSB series is by far the most popular platform brawler, a free-to-play game called Brawlhalla has formed a rather large audience as well, particularly with fan-favorite events that include World Wrestling Entertainment superstars in the game, as shown. 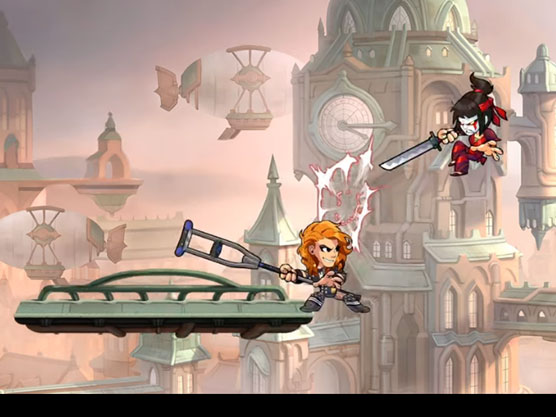 WWE Women’s Champion Becky Lynch knocks an opponent off the platform in Brawlhalla for PlayStation 4.