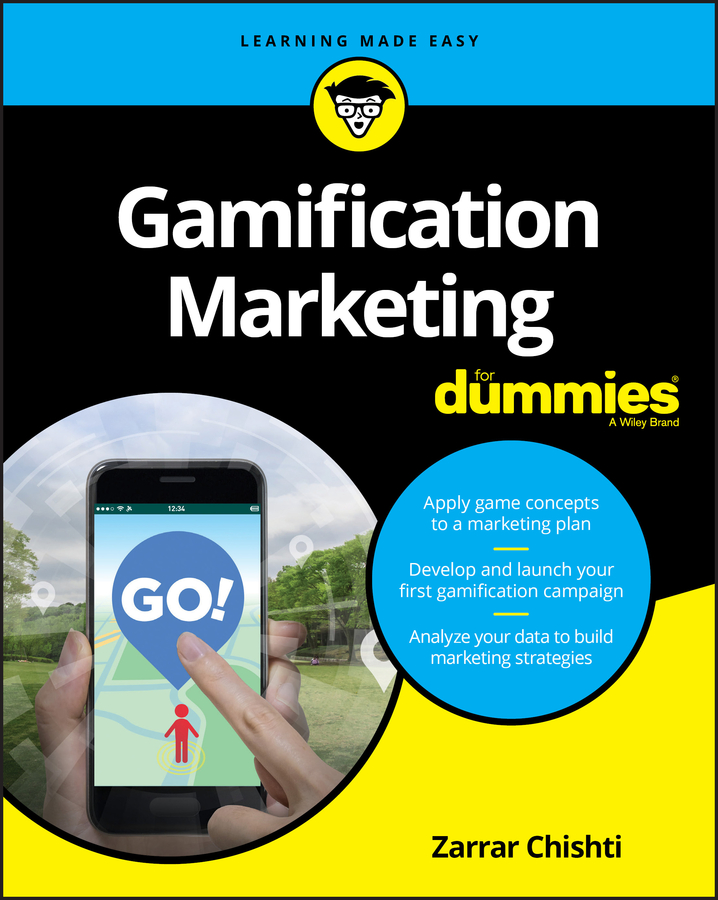 Grow your customer base with games!

Gamification is the practice of adding elements of gameplay into marketing materials to better engage customers. In Gamification Marketing For Dummies, you’ll learn to use this proven strategy to capture the attention of your target markets and boost your results using valuable gamification data.

Games are fun! That’s why gamification is so successful—customers will jump at the chance to play and win your custom-developed marketing game. You’ll connect with your customers and create lasting memories. Whether or not you are digitally savvy, this book will teach you the basics of gamification, from choosing the right game to capturing the user behavior data that the game generates.

From simple strategies like customer loyalty programs to complex, branded, social game apps, this book will point in the direction of gamification that works for you.

Articles From Gamification Marketing For Dummies

Your gamification marketing campaign may not appeal to your audience year-round. Consider having a rebranded version of your campaign with a seasonal theme, such as for the holiday period. Holiday marketing is an exciting experience, but it’s also incredibly competitive. As other marketing teams around the world are scrambling to think of how they’re going to celebrate the festive season, you’ll have a campaign locked and loaded and ready to go. Think about rolling out holiday marketing slogans into your campaign that tap into the warm and happy feelings your audience will have at that time of the year. Your gamification reward options don’t need to change, but your designs can be instantly transformed to create the seasonal theme, as shown. For instance, your badges can have a very simple holiday makeover during the festive period. Whatever seasonal strategy you decide on, you need to keep in mind that your campaign will be facing a lot of competition for your audience’s attention. Your audience will be distracted with family, celebrations, and every other company launching its own holiday campaign. That means that almost every one of your competitors will be looking for a way to distract your audience and grab their attention. The key to success is to separate yourself from the rest of the noise. Try to avoid simply becoming part of the holiday collections, and instead find a way for your holiday gamification marketing campaign to connect with your audience through emotion, excitement, and experience. You can do this by connecting the festive feelings into a road map for the user’s journey. Your company will have a different experience to showcase during the holiday season than everyone else. Translate this to your team to build into the gamification model so that this uniqueness will differentiate your campaign. Here are some strategies you should consider when developing your holiday-themed gamification marketing campaign. Create anticipation Building up to the event is what the holidays are all about. When you make your audience anticipate the launch of your holiday campaign, they’ll naturally feel happier when they finally get to engage with the campaign. Some of the best holiday marketing ideas focus on the buildup of excitement. The Google Santa Tracker, shown, is a great example of building excitement. By releasing new Santa content every day of December, Google got its audience noticing its brand. Building anticipation isn’t just about building excitement for the big day; it’s also about building excitement for your campaign. Giving back At the holidays, people feel compelled to give back. Your holiday gamification marketing campaign can take advantage of this feeling, by offering your audience an experience so valuable that they feel compelled to give you something back. If your campaign delivers a rewarding and engaging experience, your audience will Come back next year because they’ll feel a sense of loyalty to your holiday campaign Share it on all their social media platforms and advocate for it personally in their posts Feel compelled to engage with your company’s products and services Make 'em feel festive When designing your holiday-themed campaign, make sure you leave your audience feeling happy and festive. If you do this, the audience will be more likely to engage with your campaign and go on to purchase your company’s products or services. Capitalize on the seasonal sentiment. For most people, the holiday season is a joyous time of year. After all, the end of December means more time off work, memories made with family, and of course, giving and receiving presents. People feel more uplifted and excited in general, so your campaign should amplify these feelings. Create urgency Your holiday-themed campaign should leave your audience feeling as though they’re missing out on something special if they don’t immediately engage with it. You can do this by displaying a very visible countdown timer that displays when your campaign will come to an end. The timer will prompt people to stop dithering over decisions and start taking action. If you can design your holiday strategy with a clear expiration date, you can appeal to your audience’s sense of urgency, which will inspire them to engage and purchase. The best holiday-themed gamification marketing campaigns are the ones that recognize the finite state of the festive period and make sure the audience appreciates the urgency of engaging immediately. Personalize your content When building your holiday-themed gamification campaign, think about how you can create content that your audience will want to share with their network. Typically, people will place a larger sense of value on things that they can personalize. Office Depot/OfficeMax’s ElfYourself, shown, is a great example of this. Office Depot/OfficeMax gave its audience the chance to create a completely customized experience, which could then be shared easily on all social media platforms. This helps your company to develop a stronger emotional connection between your brand and your audience. Another popular example is the Oreo Design a Pack campaign, which tweeted out an invitation to design and personalize a pack of Oreos for friends and family members.

When you are designing a gamification marketing campaign, you need to build loyalty rewards into the gameplay. After you’ve designed on the perfect game for your audience, you’ll need to keep them coming back and playing the game. You certainly want them to play your game more than once, and not just leave the campaign at the start of their gaming journey. By designing desirable loyalty rewards into your game, you’ll find that these players will be the ones who become your campaign’s best advocates, who will fuel your word-of-mouth marketing and ultimately attract other loyal players to your game. Gamification marketing reward options Rewards are the building blocks of all gamification marketing campaigns. Your audience will play your game so that they can win something, competing against themselves or others. Their naturally competitive game-playing instincts will be invoked, so you can motivate them further into your campaign using clever reward options, like the following: Points: Your audience wins redeemable points in the game. You can award points for positive actions and experiences within the game, as well as for things like providing feedback and sharing the campaign on social media. Starbucks uses multiple options, including points, to motivate and award its audience. Badges: Badges are visual representations that confirm your audience’s achievements in the game. Think of badges as visual status symbols. Interestingly, badges can lead your audience to participate in certain challenges just so they can earn the associated badges. Makes sure the challenges are designed to fit your marketing objectives. Leader boards: Allow your audience to see how their own success in the game ranks compared with everyone else with the use of leader boards. Leader boards can inspire more competition and show people which players have unlocked the most achievements. The desire to appear at the top, or even just be featured in the top ten, will drive your audience to earn more points, which will in turn drive them into deeper engagement. Performance charts: A performance chart is a graphical view of the audience’s historical representation in the game. This will motivate a much longer playing term for each user because he’ll be shown his performance over time. Your audience will be motivated to keep playing new levels as they look to improve their chart. Avatars: Avatars can be powerful for engagement. In more traditional platforms, users are encouraged to upload photo of themselves, but in gamification your audience will likely prefer to use an alter ego. Avatars are usually customizable cartoon models that represent a player in the game. Avatars can play a very critical role in the audience’s overall engagement because they become a part of a community, which can trigger more interest. Gamification rewards and recognition Think about interactive ways to use rewards for the game option you’ve selected so that your audience will have a positive experience while playing. Here are some rewards you’ll want to consider: Fun: You want to introduce an element of fun into your gamification marketing campaign. This is especially true if your company or industry is not usually associated with fun and engaging campaigns. When done properly, your campaign can create a disruptive, fun, and engaging experience for your audience. Competitiveness: You can easily do this by adding a competitive element such as a leaderboard. Another way is to award badges that rank their audience’s abilities. This is a great way to engage with your audience and provide good fun into your campaign. Exclusivity: Who doesn’t love earning her way into an elite club? Giving a VIP experience as a reward makes your audience feel like they have a special relationship with your campaign and brand overall. This goes a long way toward building brand loyalty. A good way to achieve the goal of exclusivity is to encourage your audience to achieve particular goals (as in the Starbucks green or gold stars program). Rewarding experience: Encouraging your audience to earn more rewards for a chance to redeem them against actual products or services can be a very powerful reason for them to keep coming back to your game. A lot of companies will, understandably, make scoring points difficult, which can potentially turn your audience off playing. However, you can counter this problem by making the process of redeeming rewards easy and attractive. Added value: One of the disincentives of a loyalty program is the difficulty in obtaining reward points. You may find that many of your players will abandon the game just because it takes too long to earn rewards. With this in mind, you need to be more creative and reward nearly everything in your game. This should be done on a sliding scale, matching the value of the points with the value of the audience’s input. Also, keep in mind that with gamification, it’s possible to have different types of rewards for each action, ensuring that everybody wins. Giving random rewards: By adding random rewards into your game, you’ll delight your audience and keep them engaged in the anticipation of more. Because everyone likes to win something, the fact that your audience is present and participating in your gamification marketing campaign is valuable enough to be rewarded.

View Article
Marketing What Gamification Can Do in Marketing