By: Zarrar Chishti and
Updated: 10-23-2020
From The Book: Gamification Marketing For Dummies

Explore Book Buy On Amazon
One of the main advantages of using gamification marketing is the real-time audience engagement. Your audience gets real-time feedback and statistics that are influenced by their engagement on your campaign. Rewards and achievements will motivate your audience to keep coming back to your campaign so that they can complete or proceed with a challenge or task.

Your audience should receive points or earn experience as rewards for their actions within your campaign. Essentially, your campaign should be designed to encourage your audience with strategically clever rewards throughout the campaign. These gamification rewards and recognition will entice them to return over and over again. Following is a variety of rewards you can offer your players, from points to progress bars to badges and more.

Points are relatively straightforward to design into your campaign. The concept is simple: Complete a task, and earn points. Some websites use points as a way to encourage users to post in web forums, which helps the forum owners get more content on their site.

In most campaigns, points act as a measure of how well the user has mastered the game. So, the points signify the level of skill a person has managed to accumulate. You might award points for the following:

You can use points to create a leaderboard, which is a running list of users who have the most points.

Progress bars are graphic visualizations that show your audience their progress within areas of your campaign. For instance, they may show the progress the user has made to get to the next level. Progress bars can also be used to denote the number of points the user has to obtain in order to earn a badge.

Levels can help keep users motivated, too, but they also give the audience a sense of direction for their motivation. Users are more focused and determined if they can see where they’ll end up if they keep playing. Levels and progress bars can do the following:

Badges are extremely important in gamification marketing campaigns because they make your audience feel important and skilled. In my experience, badges strengthen the audience’s connection with the campaign.

When designing your gamification campaign, tie the points you’re allowing the audience to earn to the badges you’ll be awarding. Badges boost the audience’s engagement because they’re a visual representation of the points they’ve earned. Plus, badges are just more entertaining and fun than points (which are just numbers).

Many gamified apps and sites have used badges for high user engagement. For instance, Waze, a very popular driving app, uses ranks, which come with visual badges, as shown. 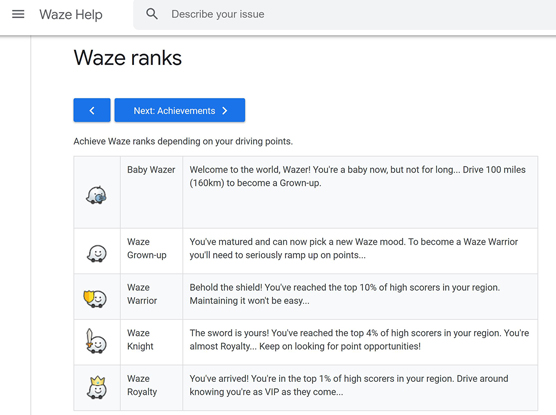 When designing your badges keep in mind the following tips:

The points your audience collects can be used to create a leaderboard in your campaign. A leaderboard is a running list of users who have the most points. This kind of friendly competition can act as a motivating factor for audiences to keep returning to your campaign.

If executed correctly, leaderboards can be powerful motivators. Here are some tips when designing your own:

Creating loyalty in your audience will not only keep them coming back to your campaign, but also increase the likelihood that they’ll actively promote it to everyone they know. In fact, loyal audiences go on to subscribe to future campaign, actively follow your company’s social media channels, and are more likely to buy from your business.

In order to create loyalty, you need to have a relationship with your audience. Relationships convert audiences into customers and spokespeople for your campaign. In the following sections, I offer tips on how to build the kind of relationship that will engender loyalty.

To create a loyal audience, you need to provide consistently amazing customer service. Your audience will evaluate every interaction they have with your campaign based on the service you provide them.

Here are some examples of where this interaction could originate:

Make sure your replies are friendly and that you convey to the user that you hear them and are working to resolve their issue. Your support, regardless of how the audience reaches you, should have the same energetic and positive tone. The replies should aim to solve their problems in a timely fashion.

Your campaign’s responses should be engineered to answer questions or address problems quickly, on all platforms. Most people on social media expect a response within an hour. I advise, particularly on Twitter, to aim to respond within half an hour.

Requesting and responding to your audience’s feedback is the best way to build loyalty. The sad fact is that most of your audience won’t give feedback unless they’ve run into a problem with your campaign.

For this reason, you want to get ahead of any potential issues and design different ways to actively obtain feedback from your users. This will demonstrate to your audience that you want to hear from them, regardless of whether they had a good experience or a bad one. Also, the responses you get will go a long way toward perfecting your next gamification marketing campaign.

Another positive outcome of actively soliciting feedback is being able to identify the reasons audiences are not returning. What’s making them leave? Why are they not wanting to return? On the flipside, you may learn what you’re doing well. What does your audience love about your campaign? Why do they keep coming back?

There are few different strategies for getting your customers to give you this feedback: 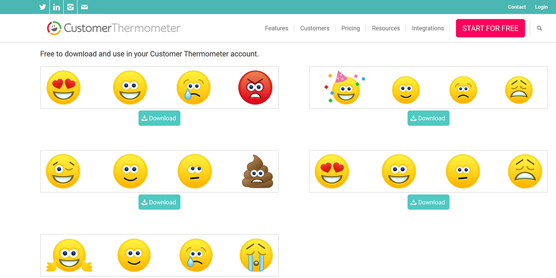 Customer Thermometer helps you implement emoji-themed surveys in your campaign.

Make sure that you take the time to celebrate your most loyal audience members on your social media channels. After you’ve given them a voice to express their feedback and experiences, you may want to make them feel special for supporting you.

Showcase their thoughts and ideas on your social media platforms like Instagram and Twitter. This will not only promote loyalty with your current audiences, but also let other people know that you value your audience.

People who love your campaign will naturally want to share it with their friends through word of mouth. A referral program goes one step further and encourages that behavior with incentives for both the referrer and the referred friend.

Design your incentive program to:

Zarrar Chishti is a software and games development consultant who has developed and marketed more than 500 games for companies all across the globe. As CEO of Tentacle Solutions, he consults with teams around the world to develop gamification options.