By: Barbara Obermeier and Ted Padova and
Updated: 01-10-2019
From The Book: Photoshop Elements 2019 For Dummies 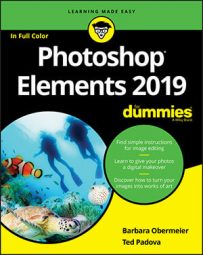 Guided Mode is like having a personal assistant to walk you through several steps in an editing process. When you click the Guided tab in the Photo Editor, you find several tabs at the top of the window. These tabs represent various categories. Click a tab, and below the tabs you find individual editing solutions.

When you click an editing option, a panel opens on the right side of the window. In the panel is a sequence of steps. Follow the steps, and you end up with a result similar to the example shown in the panel.

To fully comprehend what we mean by a meme image as it relates to Internet images, understand that in most cases it’s a humorous image, video, piece of text, icon, or something similar that is often copied (sometimes with variations) and spread rapidly by Internet users. We’ve all seen images like this that display perhaps a humorous kind of photo with text set in the Impact font creating humor, satire, or a similar kind of emotion.

The Meme Creator provides you with options for creating borders around an image a few lines of default text to edit, and if you change to Expert Mode you can see layers created for the background, text, and photo. You can then easily replace the background, delete, or edit text and replace the image. An example of a meme-created image is shown here. 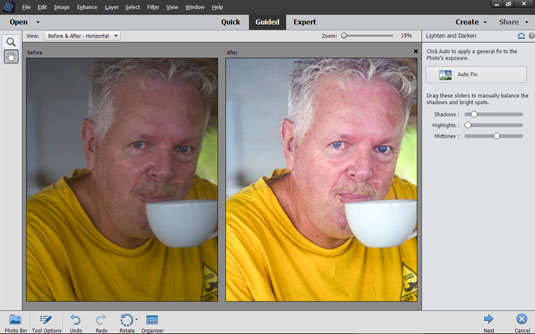 In addition to the Meme Creator Guided Edit, you also find three other new Guided Edits in Elements 2019: Partial Sketch GE, Text and Border Overlay GE, and Multi-Photo Text GE. Open photos in the Photo Editor and play around with these new Guided Edits to see what they can do for you.

The best way to discover what results you can achieve is to open photos and apply various edits using the Guided panel. Some of the more complicated options, such as creating Out of Bounds effects, offer you a link to online video tutorials to help you further simplify the process.

You have effects that can help improve images that might otherwise be uninteresting photos. Experiment with the Lomo effect (which is similar to cross-processing film), Old Fashioned Photo effect, Saturated Film effect, and Depth of Field effect. For a new creative experience, use the Puzzle effect that was introduced in Elements 12 or some of the Guided Edits that were added in Elements 13, such as the Noir effect.

Barbara Obermeier is the principal of Obermeier Design, a graphic design studio, and an Adjunct Professor at California Lutheran University. She has authored or coauthored more than 30 books.