How to Make Animations in Photoshop

Explore Book Buy On Amazon
In addition to timeline video, Photoshop provides everything you need to create frame-based animation for use on web pages and in presentations.

Although it is certainly possible to start with a video clip or even a photo when creating a frame-based animation, you may find such projects are better suited to shapes and text. You can certainly export a frame-based animation as a QuickTime video, but to post on your website, you’re more likely to use Save for Web to generate an animated GIF. (Remember that the GIF file format uses a color table limited to no more than 256 colors, so it’s not generally appropriate for photographic or other continuous-tone images.)

Prior to generating the individual frames of your animation, you’ll usually want to create all of the elements from which those frames will be created. Keeping each element on a separate layer makes frame creation a very simple process. After you have all of the elements you’ll need, open the Timeline panel through Photoshop’s Window menu and take a look at the lower-left corner of the panel. If you see the word Once or Forever with a downward-pointing arrow to the right, you’re ready to get started. If you see a button with three little boxes lined up horizontally like (ready for it?) frames in a movie, click the button to switch the panel from video timeline to frame animation. (If, for another project, you need to reconfigure the Timeline panel for video timeline, click the button in the lower-left corner.)

In a nutshell, here’s how you create a frame-based animation in Photoshop:

If each frame of the animation was identical, there would be no reason to create an animation — it would appear to be a still image. So, from frame to frame, something is usually different to provide the change-over-time that’s the basis for animation. Among the changes you can make in the Layers panel to change the appearance of the animation from frame to frame are In the Timeline panel shown, you can see how a simple animation can be created by adding a frame, moving the content of the two layers, adding another frame, dragging the objects again, and so on. 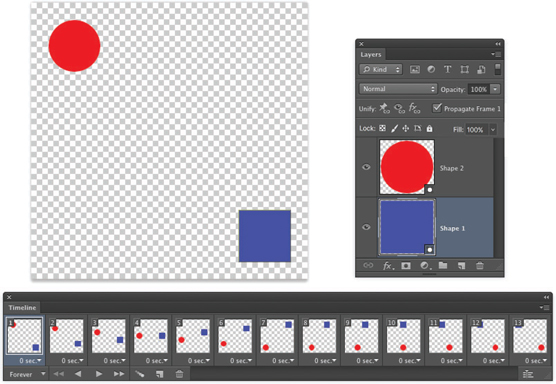 Over the course of the animation, the red ball and blue square exchange places onscreen.

After creating my three frames, Photoshop tweened pairs of frames to create the intermediary frames. Tweening creates the frames in between two frames in the Timeline panel. I clicked the first frame and then opened the Timeline panel menu and selected the Tween command. In the Tween dialog box, you can specify how many frames to generate (I choose five), what aspects of the frames you want to blend (I needed to tween only for position because there were no changes to opacity or layer styles), and whether to tween between the selected frame and the next frame or the last frame (I chose Next Frame). I then clicked the second frame I created (frame number 7 at that point, second from last) and repeated the Tween process. 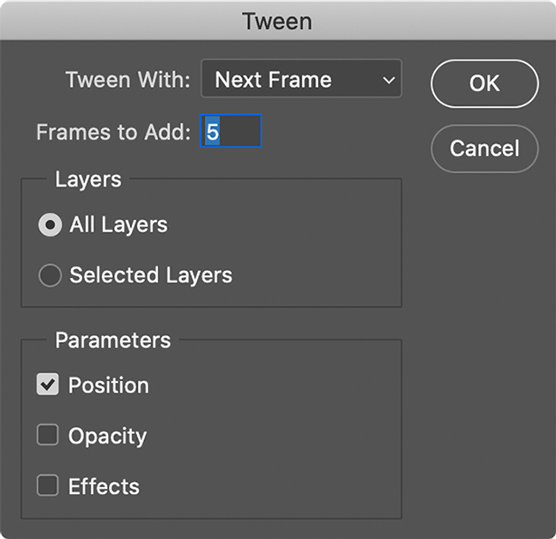 Photoshop generated 10 of the 13 frames automatically.

You control how fast (or slowly) your animation plays by specifying a frame rate. Generally, each frame plays for the same amount of time, so you can click the first frame, Shift+click the last, and select the frame rate of your choice from the menu below any one of the frames. If you select No Delay (0.00 seconds), the animation plays as fast as possible. Don’t overlook the Other option! You’re not restricted to the time delays listed in the menu.

Select all of the frames and assign a frame rate to control playback speed.

Keep in mind that not all frames need to have the same playback rate. There’s no reason why a 100% opacity frame couldn’t be set to a five- or ten-second delay, with all the other frames set to 1/10 of a second.

In the lower-left corner of the Timeline panel, you also want to select the repeat for the animation. You can elect to have the animation play once and then stop, to continuously loop (Forever), or you can choose any other number of times for the animation to play in a loop by selecting Other.

Optimize and save your animation

If you expect to be adding your animation to a web page or a presentation created in Keynote or PowerPoint, you want to generate an animated GIF. (Keep in mind that if there’s no layer named Background in the Layers panel, your animated GIF can support transparency.) After generating all the frames, open the Timeline panel menu and select the Optimize Animation command. The default settings — with Bounding Box and Redundant Pixel Removal both selected — will generate the smallest file, ensuring the smoothest playback. Save the layered and animated file in the PSD file format for future use, and then choose File→ Save for Web to create the animated GIF. (Remember to select the Transparency option in Save for Web if you don’t have a background layer.)

If you want to use your animation with devices that don’t play animated GIFs—a smartphone, for example — choose File → Export → Render Video to generate a QuickTime movie.