Explore Book Buy On Amazon
When it comes to streaming games and esports, the most important element to your overall presentation is the quality of your source material. Playing well and being charismatic are important, to be sure, but how entertaining or engaging your stream is won’t matter if your video quality is bad, your sound is muddy, and you are uploading at a speed that causes your stream to hiccup and time out. This article sets you on the path to getting all the right equipment for streaming success. That starts with a camera. 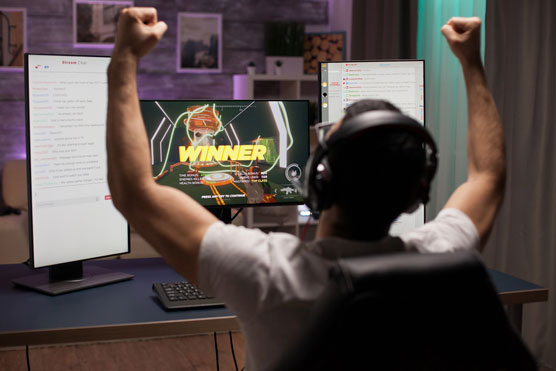 Casual streamers often run streams with a built-in camera from a laptop or with a relatively cheap webcam. If you’re just looking to dabble and test your feet in streaming, you can get by with any webcam that captures video. If you’re serious about streaming, however, you don’t want to stick with a cheap camera for too long because the quality of the input will turn off viewers.

The best bet for someone starting out streaming is to find a camera that will capture in 1080p, which is at the high end of standard high-definition video. Depending on your upload speed, you might end up broadcasting at a lower resolution, but having the ability to downscale — to move from 1080p to a lower resolution — will result in more crisp video than if you capture at a lower level. You never want to resize smaller video to larger when creating your video output because doing so degrades your image quality.

You can purchase quality webcams that capture at 1080p for $50–$100. The most popular current model is the Logitech C920 Pro HD, which has a suggested retail price of $99 but often runs cheaper. Prices fluctuate, but at any given time, a Google search should yield a vendor selling this model at around $60.

If you’re looking for the highest-quality video input, or if you just happen to have a high-quality still camera that you use for other purposes, you can attach any DSLR or mirrorless still camera to your computer via a capture device like the Elgato Cam Link. You can buy the Elgato for around $100. Unless you are looking to produce higher-quality videos in addition to your streaming, however, going over 1080p is essentially overkill. You won’t need any higher resolution for streaming or for video sites like YouTube until network speeds significantly increase.

In the previous section, I suggest using a webcam or camera that allows streaming in 1080p. Be aware, however, that streaming like this requires significant upload bandwidth, and if you don’t have sufficient bandwidth, you will have to lower your graphical resolution (making your video more blurry) and won’t be able to broadcast as many frames per second, thereby making your video animation look “choppy.” The biggest difference in the quality of your video playback comes from maintaining 60 frames per second (fps). The difference between 60 fps and 30 fps is such that no rating is given for 1080p at 30 fps because it would require the same bandwidth as streaming 60 fps at 720p would take. The loss of those frames would make the 1080p at 30 fps so much less desirable in spite of the extra resolution that no one would choose 1080p at 30 fps over 720p at 60 fps. In short, the number of frames is more important than overall resolution because the frames result in smoother animation.

The table gives you a sense of the upload bandwidth you need for various streaming video resolutions.

For broadband Internet (cable, DSL, or fiber), the Federal Communications Commission dictates that your upload speed must be at least 3,000 kbps. That should mean that streaming at 720p, 30 fps is possible. In most cases, you will have significantly higher upload speeds with commercial broadband. You cannot simply trust the numbers listed on your Internet plan, however, because those aren’t always accurate. You can determine your home Internet speed by going to SpeedTest and running a test. (Just click the Go button in the middle of the screen.) Running on a basic Xfinity cable package, in the middle of a Saturday afternoon, my home office upload speed is 18,000 kbps, which far exceeds the required bandwidth for 1080p at 60 fps.

Microphones for streaming depend largely on the desires of the streamer. If you picked up a high-quality headset like those discussed in the peripherals section of Chapter 2, and you aren’t opposed to appearing on-stream with a headset on your head, a good headset will suffice. I teach online classes using the SteelSeries Arctis headset that I also use while gaming, and the sound quality is comparable to when I use an external microphone.

You might not always want to have your headset on while streaming. Perhaps you need to move in ways that cause your headset microphone to bump against objects or slide out of position. Or you might find the attached microphone to be a problem in some way. Fortunately, you have multiple options for external microphones that can give you great sound without breaking the bank.

One of the most popular microphones among streamers, and among podcasters, is the Blue Yeti. Available for around $100, the Yeti is a quality microphone that runs directly through a USB port. This feature is important because most condenser microphones (which get superior sound reproduction) require some sort of pre-amplifier or other external power. The Yeti takes care of these issues through the USB port, which makes the device plug-and-play.

You can obviously look into more expensive microphones to get even better sound quality, but unless you are planning to include musical performance (vocal or instrumental) as a part of your stream, you are unlikely to need anything more powerful than the Yeti for streaming purposes.