Check Out the Bones on Those Osteichthyes!

Explore Book Buy On Amazon
Osteichthyes (pronounced ah-stee-ick-thees) is a class of about 28,000 fish characterized (in most forms) by a bony skeleton, scales (some without), paired fins, a single pair of gill openings supported by bony gill arches each covered by an operculum, jaws, a mouth with many teeth, a swim bladder (air-filled sack) for buoyancy, paired nostrils, and external fertilization of eggs.

Bony fish are generally broken down into two groups: 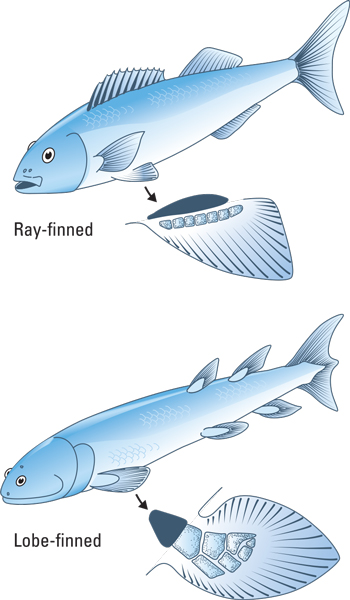 As your mother told you when you experienced your first heartbreak, there’s always more fish in the sea. With bony fish, that means 28,000 species and counting. We can’t possibly cover them all, so we kept this discussion brief by describing the two groups (ray-finned and lobe-finned) and highlighting the common, the cool, and the weird in each group.

But let’s look at some notable members of the group. Imagine an award show with categories for the smallest, biggest, fastest, and so on:

Smallest: Stout infantfish are barely as long as the width of a pencil — females max out at about 8.4 millimeters long, while males grow to only 7 millimeters. They’re also the smallest and lightest of all known vertebrates. If you ordered a pound of stout infantfish from the menu, you’d get a plate of roughly 500,000 fish!

Largest: The sunfish (Mola Mola) can grow to be over 2,268 kilograms (5,000 pounds). They live in warm water and look like a swimming fish head that has been smushed. 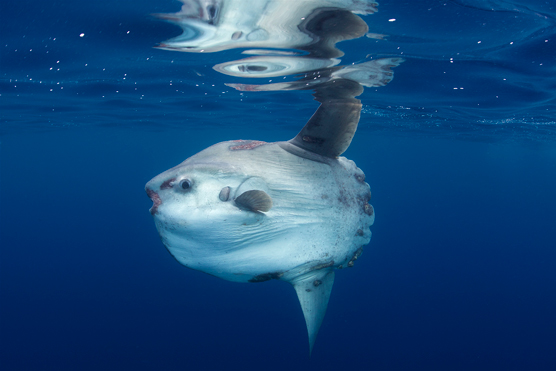 Fastest: The black marlin has been clocked at a maximum speed of about 129 kilometers per hour (about 80 mph). 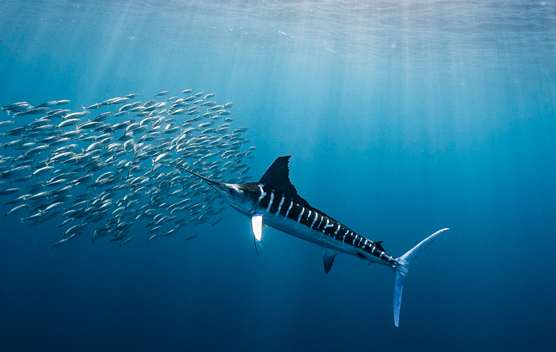 A striped marlin feeding on a bait ball.

Longest: The giant oarfish is a long serpent-looking pelagic fish up to eight meters (26 feet) long. They’re silver with a red mohawk looking fin. They cherish their privacy and are rarely seen alive.

Coolest: The Antarctic icefish lacks hemoglobin in its blood, making it clear and less susceptible to freezing, sort of like anti-freeze, which is useful for any fish living in the frigid waters off Antarctica. Due to this lack of hemoglobin, they have huge hearts and almost four times the amount of blood as other fish.

Weirdest couple: Female anglerfish have it going on! Living in the dark, deep ocean, these ladies have a dangling dorsal fin tipped with luminescent skin, which functions as a fishing rod protruding from the center of their head ending in a glow-in-the-dark lure just in front of their huge mouth full of teeth. And she has all the guys attached at the hip, seriously. Male anglerfish are usually much smaller than the females. When a male finds one of these lovely ladies, he attaches himself to her as a permanent parasite. After a while, he loses his eyes and all his organs except his testes, physically fusing his body with hers. Talk about a Stage 4 clinger! Females can carry around multiple mates. 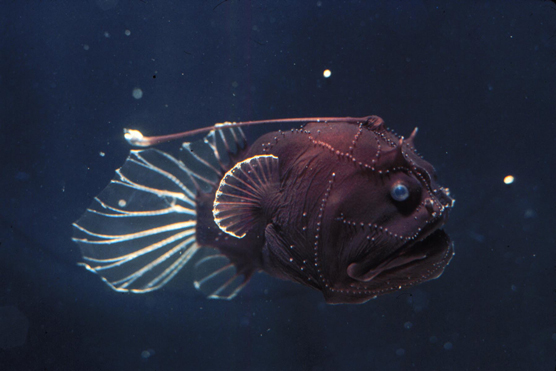 A female anglerfish—notice its “fishing pole” appendage is angled backward.

Cutest: Seahorses get by on their looks. Remember when we said most ray-finned fish look like fish? Well, seahorses are one of those exceptions. They swim around upright with what looks like a little armored body and quick moving fins. They have a tubular snout used for eating plankton and fish larvae. And it’s the male seahorses that carry around the fertilized eggs in a special pouch until they hatch — how adorable is that?! 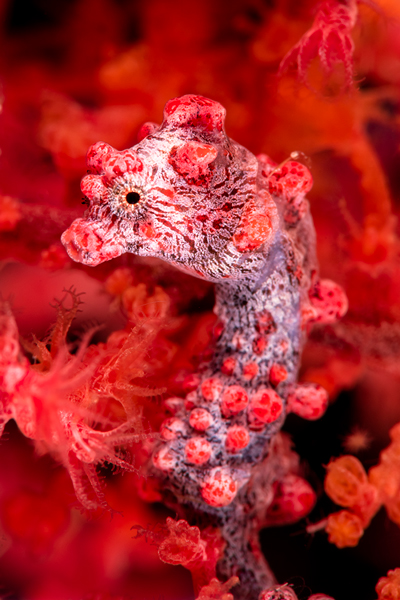 Father of the year: Speaking of caring fathers, the jawfish is a paternal mouthbrooder, meaning he holds the fertilized eggs in his mouth till they hatch (see the following figure). Every so often, he spits them out, a practice called churning, which keeps the eggs aerated, hydrated, and clean, thereby increasing the chances that more will hatch. All the while, he doesn’t eat a thing. Fortunately for him, the incubation period for the eggs is only five to seven days. 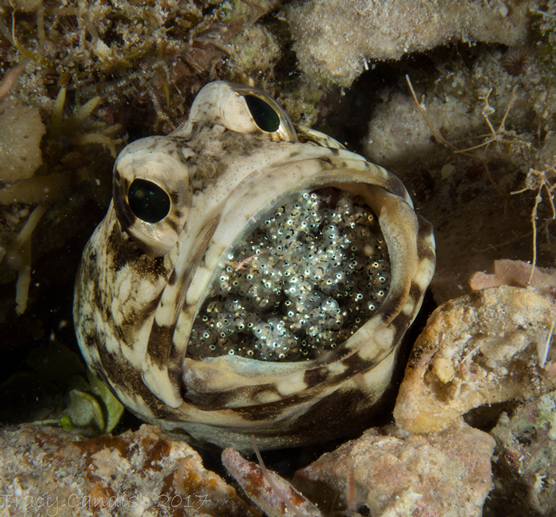 Friendliest: Yep, fish can be friendly, and a perfect example is the grouper. Because of their large size (the goliath grouper can grow to be almost 800 pounds), these fish are not really scared of anything and are naturally curious. We have had many encounters with grouper fish over the years, and honestly, they are the Golden Retrievers of the sea. The grouper in the following figure actually took Ashlan on a tour of his home, following her along her entire dive and nudging her when she wasn’t paying him enough attention. 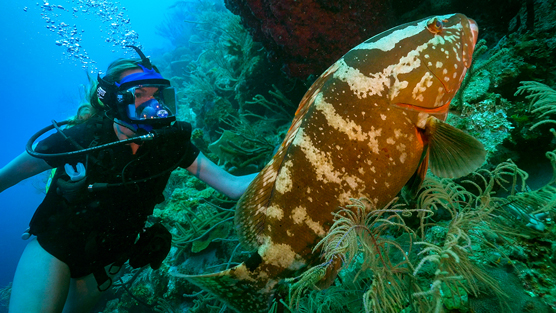 Ashlan and a Nassau grouper.

Longest living: Orange roughy, brightly colored and slow moving, can live up to 200 years — that is, unless they’re eaten (by us). The problem with eating orange roughy is that they don’t reach sexual maturity until the age of 20, so they’re exceedingly susceptible to over-fishing, and they’re caught using the super destructive fishing method of bottom trawling. If you need another reason not to eat them, they’re often full of heavy metals, such as mercury, because they live a long time and bio-magnify toxins into their tissue. So next time you are at a restaurant and they offer you orange roughy as a special, just say no and feel free to tell the waiter (and the chef) why. Honestly, most people, even in restaurants, don’t know how bad and destructive catching some of these fish is. A little schooling goes a long way.

Sarcopterygii (lobe-finned fish) are a group of only eight living species with lobe-shaped fins, two dorsal fins, gills, and lungs (which aren’t functional in certain species). They’re broken down into two classes — coelacanths and lungfish.

Thought to have gone extinct 66 million years ago with the dinos, a coelacanth was spotted at a fish market in 1938. Two extant (living) species are now recognized — the West Indian Ocean coelacanth and Indonesian coelacanth. Referred to as a living fossil, many scientists see them as a possible link between sea creatures and four-legged land animals, such as salamanders, newts, and lizards. Living as deep as 2,000 feet, these carnivorous fish sleep in caves during the day and hunt for prey (mostly octopus, squid, and cuttlefish) at night. They grow to be about 6 feet long and weigh up to about 200 pounds.

In 2010, Laurent Ballesta led a confidential Gombessa expedition in Jesser Canyon, Sodwana Bay, South Africa, to capture the very first pictures of the coelacanth taken by a diver (–120 meters). This was possible thanks to the South African diver Peter Timm, who was the first to face the mythical fish locally named Gombessa. Discover more in the book, Gombessa, Meeting with the Coelacanth. 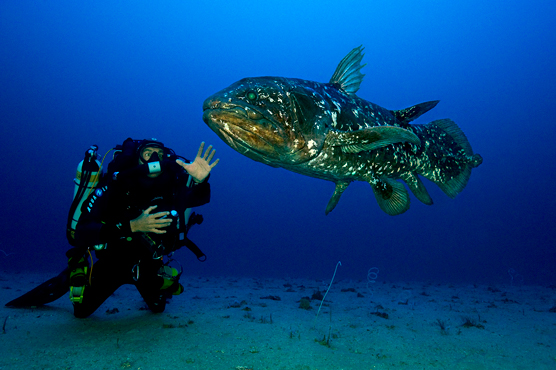 Gombessa, the local name for the South African coelacanth.

Coelacanths have lungs during their embryonic development that stop developing as the fish grows and are barely noticeable (and non-functioning) in adults. They also have a rostral organ in their snout that’s part of an electro-sensory system and a hinged skull that enables the back of the skull to tilt up to enlarge the opening of the mouth.

As their name implies, lungfish can breathe air. Yep, they have either one or two lungs (depending on the species) to extract oxygen from the air, and they also have gills to extract oxygen from water. These are freshwater fish that live in rivers and lakes in Australia, Africa, and South America. And they’re big — most species growing up to 1.2 to 2.1 meters (4 to 7 feet) long. Lungfish have horrible eye sight, but their great sense of smell, lateral lines, and sensitive touch (with their pectoral and pelvic fins) make up for it. African lungfish can also go into a deep sleep (estivation) for up to two years — a slimy sleeping beauty.