Explore Book Buy On Amazon
Elasmobranchii (pronounced ee-laz-mo-brank-ee-ee) are a familiar subclass of fish that includes some of the most misunderstood and maligned creatures in the world—sharks, skates, and rays. They’re characterized by a rigid dorsal fin (the top fin) and have four to seven pairs of gill slits to breathe.

They’re all carnivorous, feeding on everything from large marine mammals to small crustaceans, and they lack a swim bladder, equipped instead with an oily liver to maintain buoyancy. In contrast to the teeth of most vertebrates, which are locked into sockets in the jaw bones, elasmobranch teeth are attached to the jaw with fleshy tissue. Many species have rows of teeth that continue to be replaced—some may go through as many as tens of thousands of teeth in a lifetime.

Sharks go way back. The first evidence of sharks dates to the Ordovician period 400 to 450 million years ago! Approximately 450 species of fish have the honor of being classified as sharks, and they range in size from about 20 centimeters (eight inches) to 12 meters (40 feet) long. They’re all predators and feed mostly on fish, seals, and whales, but some sharks, such as the whale sharks and megamouth sharks, feed on tiny plankton.

Baby sharks are called “pups,” but even before they’re born, they’re not all sweet and cuddly. Some baby sharks eat their brothers and sisters who are growing slower while still inside their mother (talk about sibling rivalry!). Other species of sharks create extra eggs for the growing pups to consume. Both are examples of intrauterine cannibalism. Some scientists believe this practice is “survival of the fittest” to keep the species strong.

The smallest of sharks is the dwarf lantern shark. Lantern sharks, as their name implies, are bioluminescent—able to produce their own light, which they use to ward off predators, blend in with the lighter background above them, and communicate when swimming in schools.

On the other end of the size spectrum is the whale shark, which can grow as long as 40 feet and weigh up to 40 tons (see the following figure). While this whale shark could easily gulp down prey larger than humans, it prefers feeding on tiny plankton. So, the biggest fish in the sea eats some of the smallest food. 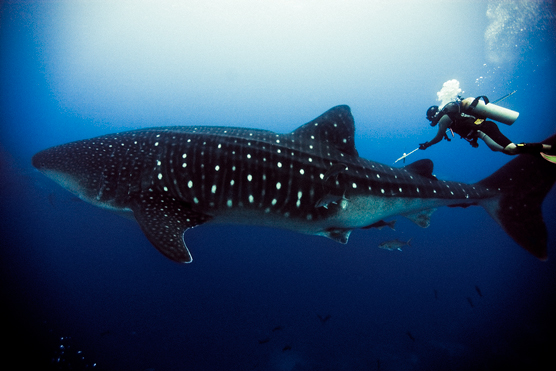 The largest fish in the sea, the whale shark, followed by a diver about to attach a satellite tag to monitor the animal’s movements for research.

Bull sharks, so named because of their short, blunt snout, wide body, and aggressive temperament (and because they often head-butt their prey before eating them), are unique in that they can live in freshwater or marine environments, sometimes swimming far upstream into a river or tributary (see the following figure). Among sharks, they pose perhaps the most serious threat to humans mostly because they like to swim in the same places humans do, not because they find humans particularly tasty. 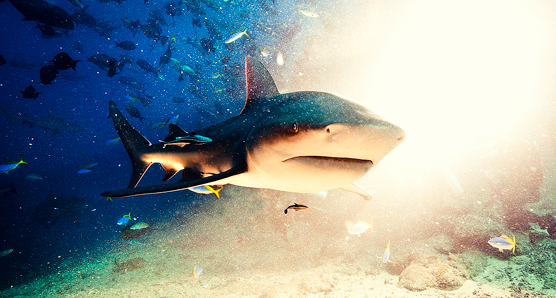 The bull shark — saltwater, freshwater, no problem. (This photo is from our friend Michael Muller who adds a little artistic flair to his photographs, which helps illustrate the beauty and drama of these fantastic creatures.)

Mako sharks (see the following figure) are perhaps the fastest of the species and one of the fastest fish on the planet, attaining speeds of up to 74 kilometers (45 miles) per hour, fast enough to chase down its favorite food — the speedy tuna. 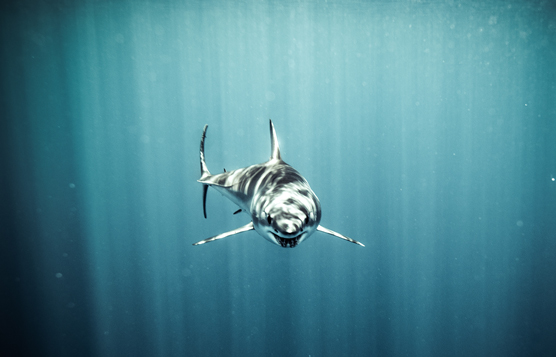 The mako shark is known for its speed and athleticism.

The hammerhead shark gets the award for being the weirdest looking with an eye on either end of its mallet-shaped head. They feed mostly on small fish, octopus, squid, and crustaceans and can grow up to six meters (20 feet) long and weigh as much as 450 kilograms (about 1,000 pounds). Depending on the species, they are either solitary or school in enormous numbers. 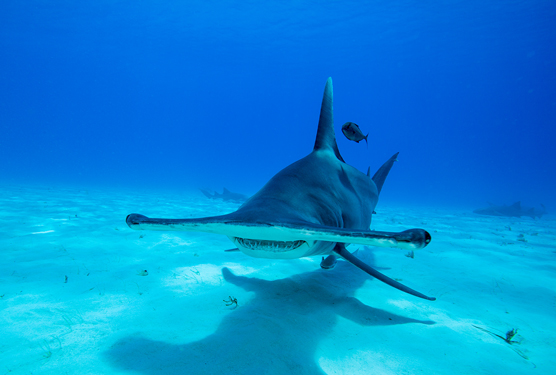 A lone great hammerhead shark (better to see you with, my dear). 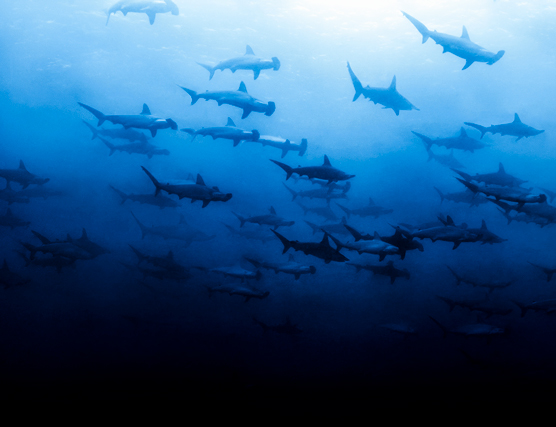 No section on sharks would be complete without mention of the baddest shark prowling the oceans — the great white shark, which can grow up to 6 meters (20 feet) long and weigh more than 2.5 tons (see the following figure). They have a varied diet of fish, crustaceans, seals, sea lions, other sharks, and even small-toothed whales such as orcas. Where do they live? Wherever they want. But seriously, you can bump into one just about anywhere the water temperature is between 12 and 24 degrees Celsius (54 and 75 degrees Fahrenheit). 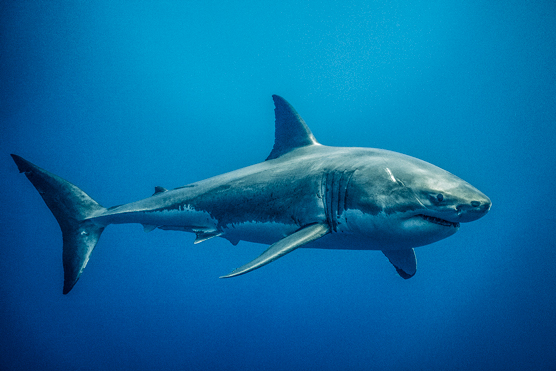 Some people are terrified of sharks and won’t even take a dip in the ocean because of them, but we love sharks. I (Ashlan) am particularly fond of them for their beauty, size, power, athleticism, diversity, and for all they do to keep our oceans healthy. We really want you to love and respect them, too . . . and, if you fear them, to stop being afraid. Sharks have far more reason to fear (and hate) us humans than we have to fear them.

Yes, Jaws scared the “carp” out of all of us, and to his dying day Peter Benchley (who wrote the book) felt horrible for this. He later became a huge shark activist, but the damage had been done. Generations of readers and moviegoers were scared out of their swimsuits of sharks, especially the great white, and unnecessarily so.

Sharks are not vicious murderers just waiting for you to wade past the buoys or paddle your surfboard or paddleboard overhead. Certainly, some animals kill for fun — namely dolphins, house cats, killer whales, leopards, honey badgers, and, of course, humans. But the vast majority of predators, including sharks, eat only when necessary. And, like many predators, sharks carefully calculate their return on investment—whether they’ll expend more energy attacking a healthy surfer or an injured seal, for example. That’s why sharks smell for blood. They’re on the prowl for the wounded and the sick, and they can go long stretches without eating, so they can afford to be picky eaters and wait for the right opportunity to come along. Nothing personal, but you’re not the first choice on their menu. In fact, scientists believe that shark attacks happen as a case of mistaken identity. Sharks can only tell what you are with their mouth (no hands to feel ya with) which is why most attacks are a single bite and release and thus not usually fatal. The sharks quickly realize that you aren’t their normal prey and they move on.

Still afraid? Then check out the following table to put your chances of dying from a shark attack in perspective.

Not only are sharks much less dangerous than many people think, they also play a vital role in maintaining a healthy ocean. As apex predators, they keep the population of their prey in check, strengthen the gene pools of their prey, and reduce the spread of disease by eating the sick, weak, and injured. Lions, tigers, bears, and other apex predators perform the same service, but they don’t get the horrible rap that sharks do (and they also attack people every once in a while, just sayin’). Sharks also protect plants and help preserve plant-based ecosystems by reducing the populations of the animals that graze on those plants. And they do their part to sequester carbon.

Philippe and I swim with all types of sharks all over the world. From dozens of Great Whites off Mexico, swarms of Grey Reef Sharks in the Marshall Islands, to Whale Sharks in La Paz and huge Great Hammerheads in the Bahamas — never once have we felt scared or threatened. But we are always cautious and respectful when we’re in the water with these extraordinary predators. The ocean is their home, not ours.

Unfortunately, every year, sharks are killed for their fins and their meat — about 100 million a year (but that number could actually be anywhere between 63 million and 273 million sharks killed each year). On average, that means about 11,400 sharks are slaughtered every hour, whereas four people in the whole entire world die from shark attacks per year on average. Sharks have far more to fear than we do.

Rays are a group of about 500 species that live in ocean waters worldwide. They look like a shark that has been smushed into a pancake in the outline of a kite (see the following figure). While sharks propel themselves with their tail, rays propel themselves with elongated wing-like pectoral fins. Some rays have a whip-like tail tipped with a venomous barb. A ray’s mouth is usually on the underside of its body and, when viewed from certain angles, looks as though it’s smiling. Instead of pointy teeth like sharks, rays have evolved rounded teeth they use to crush and grind their prey, mostly mollusks, crustaceans, and small fish. 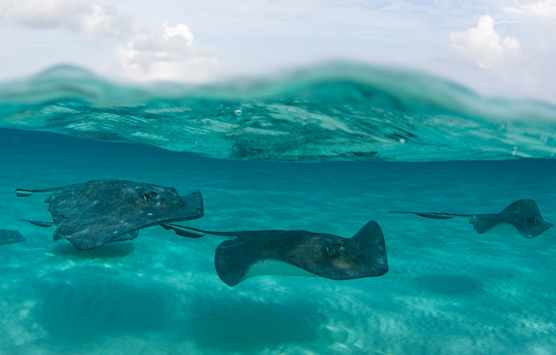 Another difference from sharks is that rays have their gill slits underneath their body as opposed to the sides and take in water to breathe through large openings (spiracles) on the upper surface of the head. In addition, most rays have their eyes on top of their head. Most are benthic (bottom dwelling) but some species such as the manta ray are epipelagic (free swimming). Like sharks, males have a clasper they use to mate with the female which then almost exclusively gives birth to live young. Finally, rays are almost all marine.

Rays are a diverse group that includes electric rays, stingrays, manta rays, and more. In this section, we cover a few of our favorites.

Electric rays have a rounded body and range in length from less than 30 centimeters (1 foot) to about 2 meters (6 feet). They’re equipped with two large electric organs positioned on either side of their head that are capable of delivering a 220-volt shock — more than sufficient for stunning prey and fending off predators. They generally feed on small fish and invertebrates, so you’re pretty safe unless you happen to step on one.

The largest ray is the giant manta ray, shown in the following figure, which has a “wingspan” of up to nearly 9 meters (30 feet). They’re commonly referred to as “devil rays” because of the two special flaps at the front of their heads called cephalic lobes, but devil rays are very sweet. They feed mostly on plankton, using those devilish horns to direct more water and food into their mouths. 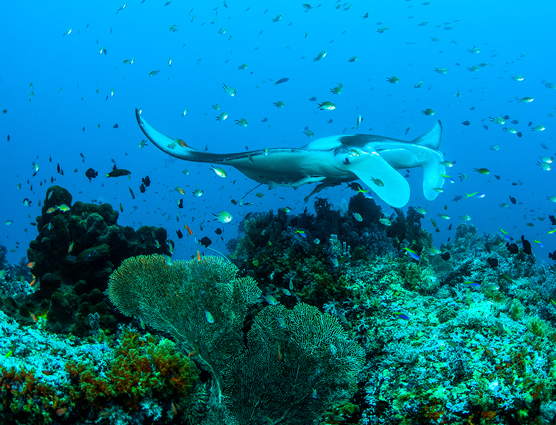 Eagle rays have beautiful spotted skin that produce the appearance of dappled sunlight as they swim through the water. Unlike most rays, they have a very long pronounced tail and have been known to launch themselves out of the water in dramatic displays, spinning and flipping in the air.

Last on our list of rays is the most unique of the group—the sawfish, also referred to as a carpenter fish. Granted, it looks more like a shark, but its mouth and gills are positioned on its underside, and it has wing-like fins characteristic of a ray. Its coolest feature is its long snout rimmed with exposed teeth.

Skates are members of the same subclass as rays, and they look like rays, but they have a few key differences. While rays are more diamond shaped, a skate’s body is more triangular or rounded, and they often have a pointy nose. Skates also have thicker, wider tails with sharp spikes that run along the middle of the tail and up their backs (no barb at the tip). Skates have small teeth to eat prey, in contrast to the rounded teeth rays use to crush and grind their food. While rays swim in both shallow and open water, skates typically hang out near the bottom and often hide in the sand. Also, instead of live births, skates lay eggs in a leathery case called a mermaid’s purse. 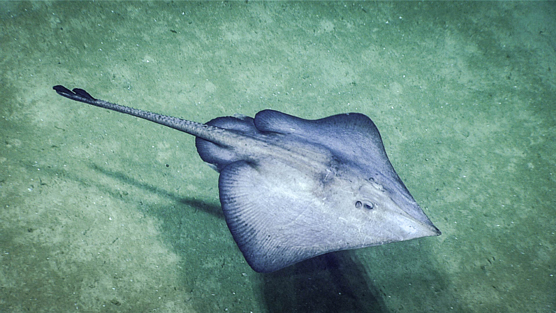