Bivalves: Parts One and Two

Explore Book Buy On Amazon
Bivalves are headless mollusks with a hinged, two-part shell, sort of like castanets. They’re very diverse, boasting a membership of more than 15,000 species divided into four main groups—clams, oysters, mussels, and scallops—generally based on where they live and the shape of their shells. Clams prefer an infaunal lifestyle, buried in the sand or silt, whereas mussels, oysters, and scallops live a more epifaunal lifestyle (on or above the seafloor).

Regardless of whether they’re in-ground or above-ground, they have specialized gills that serve two functions — to extract food and oxygen from the water. They play a key role in cleaning the water and, fortunately, live in or near just about every body of water—oceans, lakes, ponds, rivers, and streams.

Bivalves lead interesting sex lives. Clams and other burrowers tend to be dioecious, meaning they’re male or female their entire lives. Many scallop species are serial hermaphrodites, able to produce male and female gametes (sperm and eggs) their entire lives. Various oyster species are protandric hermaphrodites — males in their youth and then changing to females and staying that way as they get older (you go, girl). European oysters are rhythmical consecutive hermaphrodites, changing back and forth over the course of their lives.

If you’ve been to the ocean, you probably had a close encounter with a clam, although you may not have noticed, because they usually bury themselves in the sand for safety. To breathe and feed, they extend a long double-tubed siphon just above the surface of the sand that works sort of like a snorkel. One tube draws in water containing food and oxygen, and the other expels water, carbon dioxide, and wastes.

Unlike oysters and scallops that move around on the seafloor at least a little, most clams restrict their movement to digging down and digging out. They use their mollusk foot less as a foot for locomotion and more as a shovel for digging. They also have two powerful adductor muscles located on opposite ends of the shell to close their home up tight when they feel threatened and to seal in the moisture in case they get stranded on shore.

Most clams are filter feeders, although some supplement their diets by establishing symbiotic relationships with algae (in shallow water) or chemosynthetic bacteria (in deep water or areas that are high in sulfides). Giant clams are somewhat famous for their symbiotic relationship with algae. In fact, they’ve been referred to as “greenhouses for algae”—directing beneficial light to the mantle, where the algae hang out, but because too much light can be harmful to algae, the clam’s filter also redirects harmful light wavelengths away from the algae, making said algae feel right at home. Maybe this is why the giant clam is the largest of its kind. It can grow to be more than three and a half feet across and weigh more than 400 pounds! 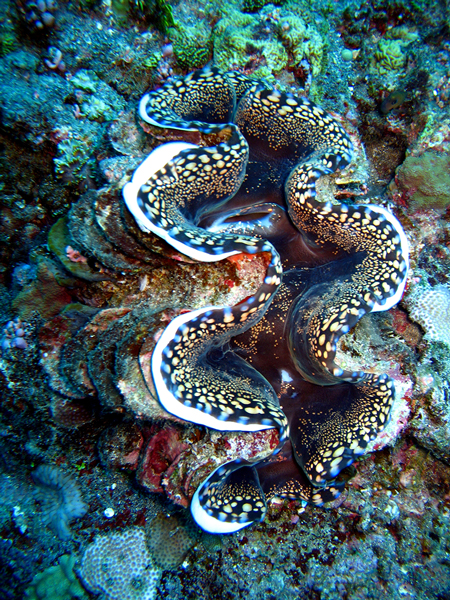 Oysters are awesome. You can eat them, build reefs with them, harvest their pearls to make beautiful jewelry, and even use them to clean the ocean. In fact, they’re top-of-the-line water filters! A single oyster can clean two to three gallons of water an hour, and they never get tired or break down. It’s no wonder conservationists and habitat restoration projects use oysters all over the world to quickly and naturally clean up dirty water and restore ecosystems. (Check out the “Billion Oyster Project” off NYC in the Hudson River.)

Oysters are actually a subclass of saltwater clams but with irregularly shaped shells, which is how you can tell an oyster from a clam, a mussel, or a scallop. Those other bivalves have smoother shells with both halves matching pretty closely. Oyster shells are irregularly shaped and rougher. Their outer surface looks more like a bad concrete job but they can produce the most beautiful pearls on the inside.

You can tell the color of a pearl before you even open the oyster by looking at its “lip”—its outer edge, because they form pearls out of the same material (nacre) they use to create their hard inner shells. These inner shells are the source of “mother of pearl,” which is used to create jewelry and adorn other objects.

Mussels hang out in freshwater lakes, streams, creeks, and rivers, along with the intertidal zone, where ocean meets land. They’ve been cultivated in Europe since the 1400s for food (steamed in a white wine sauce with a side of French fries, please). In marine environments, mussels are often sessile, anchored to rocks in high-flow areas with their byssal threads, as explained in the nearby sidebar. They’re filter feeders, playing an important role in keeping the water clean.

Some bivalves, mussels in particular, anchor themselves to a substrate using byssal threads, sort of like the material spiders use to create their sticky webs. After its juvenile stage, during which it floats around, a mussel uses its foot to attach itself to a solid surface (a rock, dock, cliff, mangrove root, oil tanker, or other solid object submerged or regularly doused with water), excretes a sticky plaque that holds it in place, then excretes a collagen-based protein from its byssal gland (in its foot). The mussel may create hundreds of these threads. It can then relax its foot, or even retract it, so it doesn’t need to waste energy trying to hold on.

Young scallops can use byssal threads, too, but more conservatively, often affixing themselves temporarily to a substrate using a single byssal thread.

Scallops have two fanlike shells joined by a straight hinge, which, along with the muscle inside that joins the two shells, enables them to “swim” short distances. Okay, it’s not really swimming; it’s more like a clapping motion that propels them through the water, but it gets them where they’re going. If you’ve never seen a scallop swim, head to YouTube right now and watch a clip. Scallops are also unique in that they have two rows of light-sensing organs, like eyes, arranged along either side of the scallop’s opening. 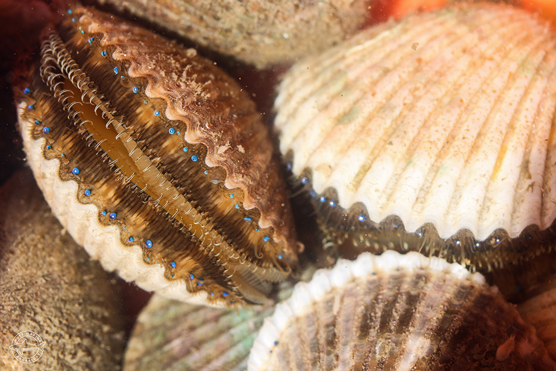 A scallop has “eyes.”