Cephalopods: Head and Tentacles Above the Rest

Explore Book Buy On Amazon
While gastropod means stomach on a foot, cephalopod means head on a foot, but with these mollusks, the pod (foot) has evolved into many prehensile arms/tentacles, which may be equipped with suction cups, hooks, or gooey mucus to catch prey and perform other functions. Yes, we’re talking octopus and squid, and their close cousins, the nautilus and cuttlefish. Most cephalopods have eight to ten arms, but some (such as the nautilus) have as many as 90. Now that’s a lot of handwashing!

If you look at a bivalve and a cephalopod side by side, you’d never imagine they were in the same family. Not even close! Every cephalopod has a sophisticated brain, three hearts, good eyesight, a system of jet propulsion, prehensile arms, a sharp beak, and (in most species) an ink sac for self-defense — whereas a clam is a hunk of flesh sealed in a shell that can attach itself to rocks and sips through a straw.

Most cephalopods lack the distinct shell that’s characteristic of most mollusks. One exception is the chambered nautilus, which has a well-developed shell with air-filled chambers to keep it afloat. The cuttlefish, which kinda looks like a nautilus without an external shell has an internal, elongated, saucer-shaped shell called a cuttlebone, which is often sold at pet stores as a calcium source for birds (which seems kinda wrong, btw). The squid has a long, thin, internal shell called a pen.

In this article, we introduce you to the four most common members of the cephalopod family.

If aliens exist on this planet, they’re octopi or octopuses (both spellings are acceptable, by the way). The octopus is regarded as one of the most intelligent creatures in the sea, and the most intelligent invertebrate on Earth thanks to its large brain. In fact, the brain-to-body ratio of the octopus is the highest of all invertebrates and greater than that of many vertebrates. It even has a group of nerves that act brain-ish for each arm, enabling the octopus to move them independently. The octopus is also a tool user and can learn and remember. (Full disclosure, they’re Philippe’s favorite animal—can you tell?) 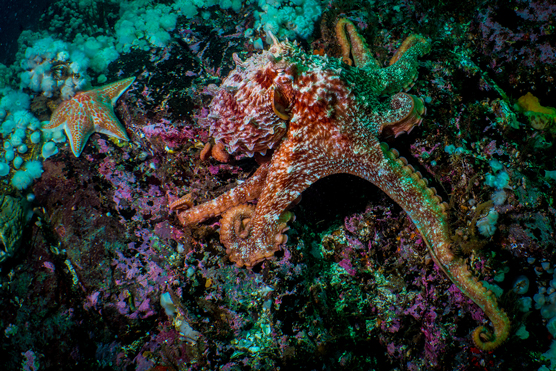 Moving on to the body, an octopus has eight arms, each of which has two rows of suckers used to capture and hold prey and to stick to smooth surfaces. The arms lead to a skirt, in the middle of which is their mouth (beak). With three hearts, they have lots of love to give. One heart pumps blood through the body, while the two small hearts pump blood to the gills. Their bodies are very malleable, allowing them to squeeze into super tight spaces — as long as their beak fits, they can make it, bringing a whole new meaning to the phrase, “If I fits, I sits.”

Compared to bivalves, their sex lives are ultra-conservative. Males remain males and females remain females their entire lives. As soon as the male passes sperm to the female to fertilize her eggs, the female becomes a devoted, die-hard mother . . . literally. For example, the giant pacific momma octopus lays her eggs and attentively watches over them, keeping them clean, aerated, and protected for up to ten months, during which time she doesn’t leave and doesn’t eat. She usually dies shortly after her eggs hatch. Octopus fathers don’t fare much better — they often die after mating (talk about deadbeat dads!).

An octopus will always beat you at a game of hide and seek. They’re able to change their color and texture to match their surroundings to a T. But the mimic octopus has everyone beat; it can even change its shape to impersonate other creatures such as a flounder, a lionfish, a sea snake, or even a tube worm. Hey, do you guys hire out for parties?

Honestly, we could write an entire chapter or even a whole book about octopi, given how fascinating they are. Just look at how adorable the dumbo octopus is, and the mating ritual of the Argonaut Octopus is something we just can’t talk about in a book for family audiences. So much to say, but so little time.

Squids look a lot like octopi, but they’re different in many ways, including the following: 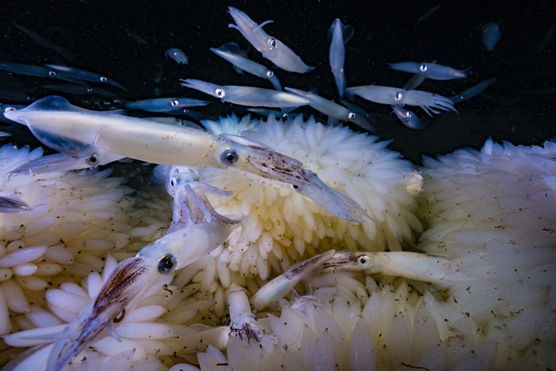 Squid hatching from clusters of eggs.

Squids range in size from about 16 millimeters (less than one inch, and so cute) up to 22 meters (about 72 feet, and terrifying) when stretched out.

Some cool species of squid include the glass squid — almost fully transparent except for its eye balls (though its eye lids act as an invisibility cloak); the vampire squid, which can turn itself inside out to avoid predators; and the Humboldt squid, which can pulse its body with flashing red and white bioluminescence. Yowsa!

The giant squid is about eight meters (26 feet) long, but with its tentacles stretched out, it may reach 22 meters (72 feet) in length. These massive creatures live in the deep ocean, and scientists still don’t know much about them. Most of what’s known has been gathered from studying carcasses that have washed up on beaches or been brought in by fishing boats.

Because they live in the deep sea, giant squid have giant eyes. We’re talking BIG, as in largest in the animal kingdom — about 10 to 12 inches in diameter (the better to see you with my dear!). Researchers also think that giant squid live only about five years, meaning they must grow like weeds, and that they mate only once, so they’d better make it count.

However, while the giant squid may be the longest, it may not be the largest. The colossal squid is shorter but weighs twice as much. One colossal squid on display at the Ta Papa Museum of New Zealand tips the scales at 490 kilograms (just over 1,080 pounds) while an average Giant Squid weighs in at around 275 kilograms (606 pounds). The beak of the colossal squid is the largest of all among mollusks, and their eyeballs are about the size of soccer balls.

Even with their massive size, the giant and colossal squid are the preferred prey of the deep diving sperm whale. And (fun job), some scientists study the undigested beaks of these squid in sperm whale stomachs to gather additional information about the species. That would be one colossal and very smelly day at the office.

Cuttlefish, also known as cuttles (no, not cuddles, although they look kind of cuddly), are sort of a cross between a squid and an octopus but with a more compact body. Like an octopus, a cuttlefish has a big brain and is a master of camouflage. Like a squid, it has eight arms and two longer tentacles and its head and body are tapered, more like a torpedo. Cuttlefish are unique in that they have an undulating fringe running along their sides and a cuttlebone to help with buoyancy, which enables them to hover. Another unique feature is their pupils, shaped like a “W,” which enables them to see in front of and behind them at the same time. 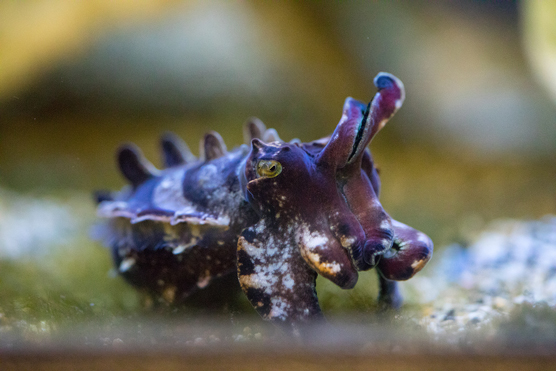 They tend to live in deep water during the winter and in the shallows over the summer months, and they live only one or two years, dying shortly after mating.

The Giant Cuttlefish lives in the waters around Australia. These large cuttles can grow to have a mantle length of about 50 centimeters (20 inches) and weigh around nine kilograms (about 20 pounds). That’s a lot to cuddle! They come back every season to the same rocky shores of southern Australia and mate, lay eggs, and then die. When the next generation hatches, they head off into the world (not much is known about where they go or what they do), but they always return to the same area to mate, lay eggs, and perish (cue up “Circle of Life” from The Lion King).

If a snail, a shrimp, and an octopus, had a baby together, it would look like a nautilus. The nautilus has a spiraled shell like a snail, but it’s sectioned off into chambers containing air to make the nautilus buoyant, enabling it hover in the water. As the nautilus grows and expands its shell, it creates new chambers. It has a face like a shrimp and arms like an octopus — actually about 90 tentacles that are grooved and secrete mucus to capture food and hold onto stationary objects when resting. Compared to octopi and squid, the nautilus doesn’t have the greatest vision, relying more on their sense of smell to find food. 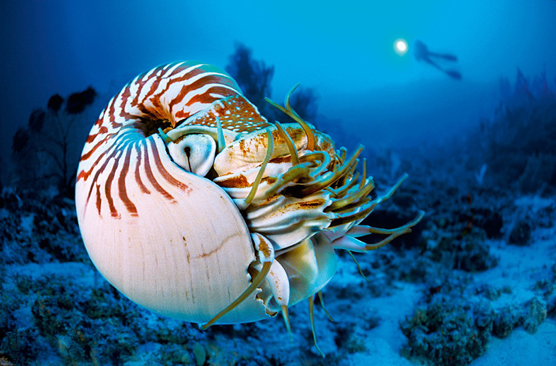 They’re nocturnal (active at night), making daily migrations up and down the water column. They live much longer than the other cephalopods (up to 20 years). Unfortunately, their shells are highly prized and because they don’t reach sexually maturity until they’re 10 to 15 years old (and even when they do, females lay only about ten eggs max), their population has declined significantly and will require a long time to bounce back. And because they need a hard shell to survive, they’re also threatened by ocean acidification. Thankfully, they’re a protected species, though poaching still happens.

The nautilus is considered a living fossil, because it has changed very little over the 500 million years it has been around (in some form). Today, they live in the waters of the Indo-Pacific, hovering above reefs at depths of about 100 to 300 meters (330 to 990 feet). They can’t go much deeper, because the pressure would crush their air-filled shells. Not a good way to go.