How to Use the KURT Function in Excel

By: Joseph Schmuller and
Updated: 10-20-2016
From The Book: Statistical Analysis with Excel For Dummies

Negative? Wait a second. How can that be? Kurtosis involves the sum of fourth powers of deviations from the mean. Because four is an even number, even the fourth power of a negative deviation is positive. If you're adding all positive numbers, how can kurtosis ever be negative? 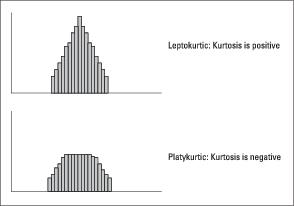 Here's how. The formula for kurtosis is

is the mean of the scores, N is the number of scores, and s is the standard deviation.

This is another formula you'll probably never use because Excel's KURT function takes care of business. The image above shows the scores an example, a selected cell, and the Function Arguments dialog box for KURT.