Explore Book Buy On Amazon
Excel knows how to help when you have more than two samples. FarKlempt Robotics, Inc., surveys its employees about their level of satisfaction with their jobs. They ask developers, managers, maintenance workers, and tech writers to rate job satisfaction on a scale of 1 (least satisfied) to 100 (most satisfied). 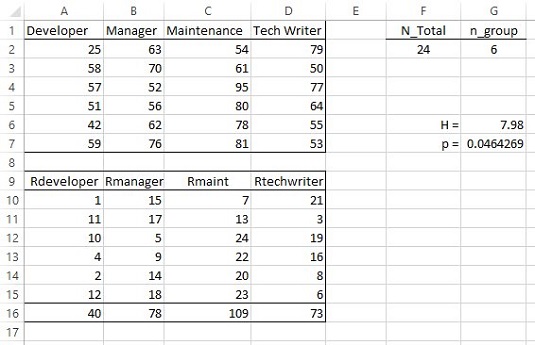 The Kruskal–Wallis One-Way Analysis of Variance.

The appropriate non-parametric test is the Kruskal-Wallis One-Way Analysis of Variance. Start by ranking all 24 scores in ascending order. Again, if the null hypothesis true, the ranks should be distributed about equally throughout the groups.

The formula for this statistic is

For the hypothesis test, type

into G7. The result is less than .05, so you reject the null hypothesis.