How to Use the XLOOKUP Function in Excel 2016

Explore Book Buy On Amazon
Excel 2016 for Office 365 subscribers on Windows and Mac now supports a new XLOOKUP function, touted as a considerably simpler and more versatile replacement for the very popular (yet oft maligned) vertical lookup function, VLOOKUP (don’t know what the X in XLOOKUP stands for; eXtensive, perhaps?).

For those of you not yet familiar with VLOOKUP (deemed the third most-used function right after SUM and AVERAGE), this function searches vertically by row in the leftmost column of a designated lookup table from top to bottom until it finds a value in a lookup column designated by an offset number that matches or exceeds the one your looking up. Although tremendously useful for locating particular items in a long list or column of a data table in your worksheet, the VLOOKUP function has several limitations not shared by this new lookup function, as XLOOKUP:

The XLOOKUP function has five possible arguments, the first three of which are required and the last two optional, using the following syntax:

* Keep in mind when designating the lookup_array and return_array arguments in your XLOOKUP function, both ranges must be of equal length, otherwise Excel will return the #VALUE! error to your formula. This is all more the reason for you to use range names or column names of a designated data table when defining these arguments rather than pointing them out or typing in their cell references.

The optional match_mode argument can contain any of the following four values:

The optional search_mode argument can contain any of the following four values: The best way to understand the power and versatility of the new XLOOKUP function is to see it in action in an Excel worksheet. In the following figure, I have a worksheet with a simple 2019 sales data table arranged by country. To use XLOOKUP to return the total sales from this table in cell E4 based on the country you enter in cell D4 of the worksheet, you take these steps: Click OK to enter the XLOOKUP formula in cell E4. 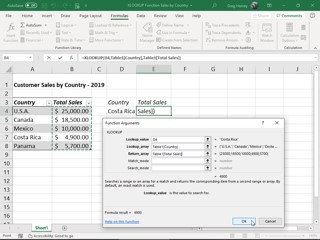 Creating a formula with XLOOKUP in cell E4 that returns sales based on the country entered in cell D4.

Excel enters the XLOOKUP formula into cell E4 of the worksheet and returns 4900 as the result because Costa Rica is currently entered into the lookup cell D4 and as you can see in the 2019 sales table, this is indeed the total sales made for this country.

Because XLOOKUP works right-to-left just as well as left-to-right, you can use this function just as well to return the country from this sales table based on a particular sales figure. The following figure shows you how you do this. This time, you create the XLOOKUP formula in cell D4 and designate the value entered in cell E4 (11,000, in this case) as the lookup_value argument.

In addition, you enter -1 as the match_mode argument to override the function’s exact match default so that Excel returns the country with an exact match to the sales value entered in the lookup cell E4 or the one with the next lower total sales (Mexico with $10,000 in this case as there is no country in this table with $11,000 of total sales). Without designating a match_mode argument for this formula, Excel would return #NA as the result, because there’s no exact match to $11,000 in this sales table. 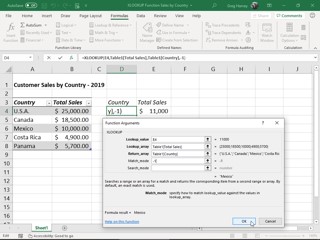 Because the XLOOKUP function is equally comfortable searching horizontally by column as it is searching vertically by row, you can use it to create a formula the performs a two-way lookup (replacing the need to create a formula that combines the INDEX and MATCH functions as in the past). The following figure, containing the 2019 production schedule table for part numbers, AB-100 through AB-103 for the months April through December, shows you how this is done. 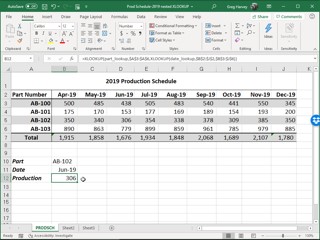 In cell B12, I created the following formula:

This formula begins by defining an XLOOKUP function that vertically searches by row for an exact match to the part entry made in the cell named part_lookup (cell B10, in this case) in the cell range $A$3:$A$6 of the production table. Note, however, that return_array argument for this original LOOKUP function is itself a second XLOOKUP function.

The way this formula works is that Excel first calculates the result of the second, nested XLOOKUP function by performing a horizontal search that, in this case, returns the array in cell range D3: D6 of the Jun-19 column (with the values: 438, 153, 306, and 779) as its result. This result, in turn, becomes the return_array argument for the original XLOOKUP function that performs a vertical search by row for an exact match to the part number entry made in cell B11 (named part_lookup). Because, in this example, this part_lookup cell contains AB-102, the formula returns just the Jun-19 production value, 306, from the result of the second, next XLOOKUP function.

* Unfortunately, the XLOOKUP function is not backward compatible with earlier versions of Microsoft Excel that only support the VLOOKUP and HLOOKUP functions or compatible with current versions that do not yet include it as one of their lookup functions, such as Excel 2019 and Excel Online. This means that if you share a workbook containing XLOOKUP formulas with co-workers or clients who are using a version of Excel that doesn’t include this new lookup function, all these formulas will return #NAME? error values when they open its worksheet.