How to Find Correlation in Excel

Explore Book Buy On Amazon
Spearman’s correlation coefficient, rS, was the earliest non-parametric test based on ranks. For a sample of individuals each measured on two variables in Excel , the idea is to rank each score within its own variable. Then, for each individual subtract one rank from the other. If correlation is perfect (in the positive direction), all the differences are zero. 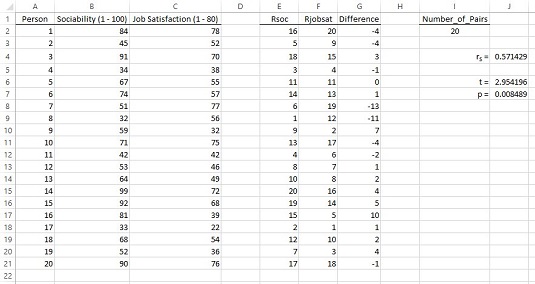 where d is an interpair difference. As is the case with the regular correlation coefficient, if the null hypothesis is true, the value of rS should be around zero.

To calculate the ranks in column E, type

into E2 and autofilled. For the ranks in column E, type

into F2 and autofilled.

You don’t have to type a complicated Excel formula into cell J4 to calculate the correlation coefficient. Why? Because Excel and mathematical statistics team up for a swell surprise: All you have to do is type

into J4. That’s all there is to it. Using CORREL on the ranks gives the same answer as the formula above. (So it isn’t really necessary to calculate the interpair rank differences in column G.)

N is the number of pairs, and the test has N-2 degrees of freedom.

You can define Number_of_pairs as the name for the value in cell I2. So type

into J7. You can use the two-tailed t distribution function if you don’t know the correlation’s direction in advance. And once again, the low p-value tells you to reject the null hypothesis.