What Is Blender? The Software’s Origins and Evolution 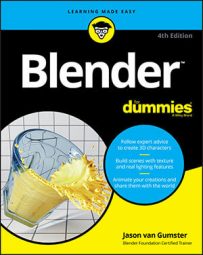 Explore Book Buy On Amazon
What is the Blender software and what can you do with it? Blender is a free and open source 3D modeling and animation suite. Yikes! What a mouthful, huh? Put simply, Blender is a computer graphics program that allows you to produce high-quality still images and animations using three-dimensional geometry.

It used to be that you’d only see the results of this work in animated feature films or high-budget television shows. These days, it’s way more pervasive. Computer-generated 3D graphics are everywhere. Almost every major film and television show involves some kind of 3D computer graphics and animation. (Even sporting events! Pay close attention to the animations that show the scores or players’ names.)

And it’s not just film and TV; 3D graphics play a major role in video games, industrial design, scientific visualization, and architecture (to name just a few industries). In the right hands, Blender is capable of producing this kind of work. With a little patience and dedication, your hands can be the right hands.

One of the things that makes Blender different and special compared to other similar 3D software is that it is freely available without cost, and that it’s free and open source software.

Being free of cost, as well as free (as in freedom) and open source, means that not only can you go to the Blender website and download the entire program right now without paying anything, but you can also freely download the source, or the code, that makes up the program.

For most programs, the source code is a heavily guarded and highly protected secret that only certain people (mostly programmers hired by the company that distributes the program) can see and modify. But Blender is open source, so anybody can see the program’s source code and make changes to it. The benefit is that instead of having the program’s guts behind lock and key, Blender can be improved by programmers (and even non-programmers) all over the world!

It’s also being used (if a bit clandestinely) more and more in larger animation, visual effects, and video game studios because it’s relatively easy to modify, has a very responsive development team, and no need for the headache of licensing servers.

Blender, like many other 3D computer graphics applications, has had a reputation for being difficult for new users to understand. At the same time, however, Blender is also known for allowing experienced users to bring their ideas to life quickly. Fortunately, with the help of the regular improvements introduced in each new release of Blender, that gap is becoming much easier to bridge.

Blender’s origins and the strength of the Blender community

The Blender you know and love today wasn’t always free and open source. Blender is actually quite unique in that it’s one of the few (and first!) software applications that was “liberated” from proprietary control with the help of its user community.

Originally, Blender was written as an internal production tool for an award-winning Dutch animation company called NeoGeo, founded by Blender’s original (and still lead) developer, Ton Roosendaal. In the late 1990s, NeoGeo started making copies of Blender available for download from its website.

Slowly but surely, interest grew in this less-than-2MB program. In 1998, Ton spun off a new company, Not a Number (NaN), to market and sell Blender as a software product. NaN still distributed a free version of Blender, but also offered an advanced version with more features for a small fee. There was strength in this strategy and by the end of 2000, Blender users numbered well over 250,000 worldwide.

Unfortunately, even though Blender was gaining in popularity, NaN was not making enough money to satisfy its investors, especially in the so-called “dot bomb” era that happened around that time. In 2002, NaN shut its doors and stopped working on Blender. Ironically, this point is where the story starts to get exciting.

Even though NaN went under, Blender had developed quite a strong community by this time, and this community was eager to find a way to keep their beloved little program from becoming lost and abandoned.

In July of 2002, Ton provided a way. Having established a non-profit organization called the Blender Foundation, he arranged a deal with the original NaN investors to run the “Free Blender” campaign.

The terms of the deal were that, for a price of €100,000 (at the time, about $100,000), the investors would agree to release Blender’s source code to the Blender Foundation for the purpose of making Blender open source. Initial estimations were that it would take as long as six months to one year to raise the necessary funds. Amazingly, the community was able to raise that money in a mere seven weeks.

Because of the Blender community’s passion and willingness to put its money where its metaphorical mouth was, Blender was released under the GNU General Public License on October 13, 2002. With the source in the community’s hands, Blender had an avalanche of development and new features added to it in a very short time, including somewhat common features like Undo (a functionality that was conspicuously missing and highly desired since the initial releases of Blender by NeoGeo).

Nearly two decades later, the Blender community is larger and stronger than ever. Blender itself is a powerful modern piece of software, competitive in terms of quality with similar software costing thousands of dollars. Not too shabby. The image below shows screenshots of Blender from its early days to the Blender of today. 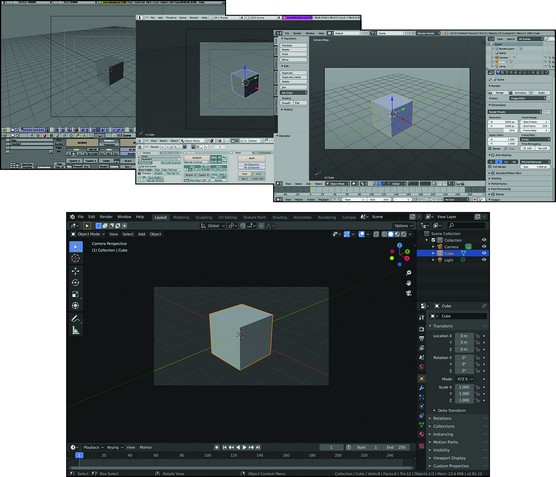 One of the cool things about the programmers who write Blender is that many of them also use the program regularly. They’re writing code not just because they’re told to do it, but because they want to improve Blender for their own purposes.

Many of Blender’s developers started as artists who wanted to make Blender do something it hadn’t been able to do before. Part of the programmers’ motivation has to do with Blender’s open source nature, but quite a bit also has to do with the fact Blender was originally an in-house production tool, built for artists, based on their direct input, and often written by the artists themselves.

Seeking to get even more of this direct artist feedback to developers, the Blender Foundation launched “Project Orange” in 2005. The project’s purpose was to create an animated short movie using open source tools, primarily Blender

A team of six members of the community were assembled in Amsterdam, in the Netherlands, to produce the movie. Roughly seven months later, Elephants Dream premiered and was released to the public as the first open movie. This means that not only was it created using open source tools, but all the production files — 3D models, scenes, character rigs, and so on — were also released under a permissive and open Creative Commons Attribution license.

These files are valuable tools for discovering how an animated film is put together, and anyone can reuse them in their own personal or commercial work. Furthermore, if you don’t like Elephants Dream, you’re free to change it to your liking! How many movies give you that luxury? You can see the film and all the production files for yourself at the project’s website.

Due to the success of the Orange project, Ton established the Blender Institute in 2007 for the expressed purpose of having a permanent space to create open movie and game projects, as well as provide the service of training people in Blender. Since then, the Blender Institute has churned out open projects (most codenamed with a type of fruit) every couple of years.

Like with Elephants Dream, both the final product and the production files for each project are released under a permissive Creative Commons license. More recently, the Blender Institute has spun off a separate entity, the Blender Animation Studio, a Blender-based animation studio with the goal of producing and releasing a feature-length animated film. The table below summarizes each of the Blender Institute’s open projects.

This image shows rendered images from a bunch of the open projects. 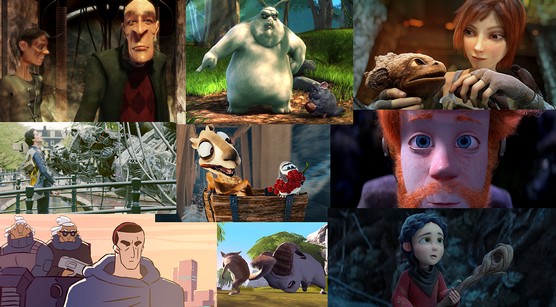 With the completion of each of these projects, the functionality and stability of Blender significantly increased.

All these projects continue to exhibit the strength of the Blender community. Each of them were financed in a large part by DVD presales (and now Blender Cloud subscriptions) from users who understand that regardless of the project’s final product, great improvements to Blender are the result, and everyone benefits from that.

Check out these Blender resources to learn more.

Jason van Gumster, author of all previous editions of Blender For Dummies, has used Blender in animation, video, and digital design for over 20 years. A Blender Foundation Certified Trainer, he has taught numerous students and serves as lead moderator on BlenderArtists.org, the largest Blender community website.