Explore Book Buy On Amazon
If you’re already used to object animation and the basics of Blender, using armatures to animate in the Dope Sheet extends naturally from that process. The following is a common process for animating with Blender. 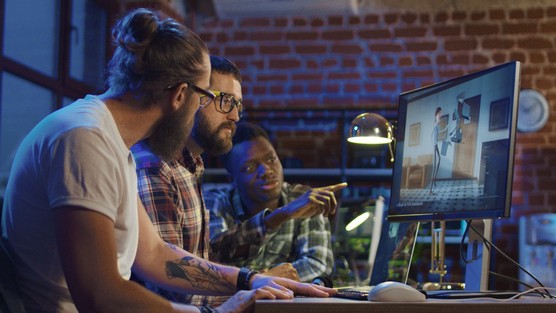 ©Shutterstock/FrameStockFootages
One luxury of computer animation is the ability to continually go back and tweak things, make changes, and improve the animation. You can take advantage of this process in Blender by training yourself to work in passes. Animate your character’s biggest, most pronounced motion first. Make sure that you have the timing down. Then move to the next pass, working on slightly more detailed parts of the performance.

For example, animate your character’s arm and hand bones before you get into the nitty-gritty details of animating the fingers. The biggest reason to work this way is time. It’s much easier to go in and fix the timing on a big action if you do it earlier.

Otherwise, you run into situations where you find yourself shuffling around a bunch of detail keys after you find out that your character doesn’t get from Point A to Point B in the right amount of time.

Don’t be afraid to break out a stopwatch and act out the action to find out exactly how long it takes to perform and what the action feels like. Animation is very much like acting, by proxy. So it helps to know what some actions actually feel like when they’re performed. If you’re fortunate enough to have friends, have them act out the action for you while you time it or even record it to video. Getting animation to look right is all about having the proper timing.

Principles of animation worth remembering

As you create your animations in Blender, try to pull from a variety of sources to really capture the essence of some action, motion, or character expression. The first and most emphatic recommendation is to keep your eyes open. Watch everything around you that moves. Study objects and try to get an idea of how their structure facilitates motion. Then think about how you would re-create that movement.

Of course, merely gawking at everything in the world isn’t the only thing you should do (and you should be prepared for the fact that people will probably look at you funny when you do gawk). Studying early animation is also a good idea.

Most of the principles that those wonderfully talented pioneers developed for animation are still relevant and applicable to computer animation. In fact, you should remember the classic 12 basic principles of animation that were established by some of the original Disney animators.

These principles are a bit of divergence, but if your aim is to create good animation, you should know about them and try to use them in even the most simple of animations:

Those are the basic principles of animation, but not a single one of them is carved in stone and you should certainly play around in Blender to see what works best. You can effectively break every one of them and still pull off some incredible animation. That said, more often than not, it’s in the best interest of your work and your sanity that you at least start within these principles and then later on find ways where you can break them in the best way possible.

Check out these Blender websites for additional information.

Jason van Gumster, author of all previous editions of Blender For Dummies, has used Blender in animation, video, and digital design for over 20 years. A Blender Foundation Certified Trainer, he has taught numerous students and serves as lead moderator on BlenderArtists.org, the largest Blender community website.