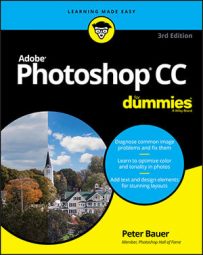 Explore Book Buy On Amazon
To merge several exposures into a high dynamic range (HDR) image, you need to have several exposures with which to work. There are two ways to meet the challenge: You can shoot a series of exposures, or shoot one Raw image and make several copies with different exposure values.

If you want the absolutely best results from Merge to HDR Pro, keep two words in mind: manual and tripod. Those are the keys to capturing multiple exposures for use with Merge to HDR Pro. The only variable you want to change from shot to shot is the camera’s shutter speed—everything else, including focus, should remain the same.

Your tripod should be sturdy and level, and a cable release is a good idea. You can use auto focus and auto exposure to set the lens and get an exposure recommendation from the camera. But then switch the lens to manual focus and set the camera to manual exposure. Before each exposure, adjust only the shutter speed.

How many exposures do you need? Go with a minimum of three: the best exposure possible for the scene’s midtones, one “overexposed” for detail in the shadows, and one “underexposed” for detail in the highlights. Each scene differs to some degree, but you’ll want to capture as much of the tonal range as possible. It is better, however, to use seven separate exposures with Merge to HDR Pro. More than that is rarely necessary, and most scenes can be captured in five exposures.

Okay, so say that you don’t have a tripod and there’s a shot that’s just crying for HDR. Set your camera to auto-bracket at the largest increment possible, set the camera to “burst” mode, get as settled as possible, frame the shot, focus, take a deep breath, let the breath out halfway, pause, then gently press and hold the shutter button.

In burst mode, three (or more, depending on your camera) shots are taken as quickly as the camera can operate. In auto-bracket mode, the exposure is automatically changed for each shot. (Note that you need to set the camera to auto exposure bracketing, sometimes seen as AEB, not white-balance bracketing. Check your camera’s User Guide.)

Alternatively, and usually with quite good results, you can change the exposure after the fact using Camera Raw. (You’ll want to use a Raw image, not a JPEG image, for this technique.) Here’s how: You can now use these three adjusted images in Merge to HDR. The results likely won’t be as great as using a series of separate exposures, but should be better than a single exposure.

Working with Merge to HDR Pro

After you have the exposures from which you want to create your HDR masterpiece, you need to put them together using Photoshop’s Merge to HDR Pro.

Be patient with Merge to HDR Pro—it has a lot of work to do before you get to play with the combined exposures. When the calculations are done, the Merge to HDR Pro window opens (as shown). If the option is offered, you can elect to manually set the exposure value (EV) for the images. 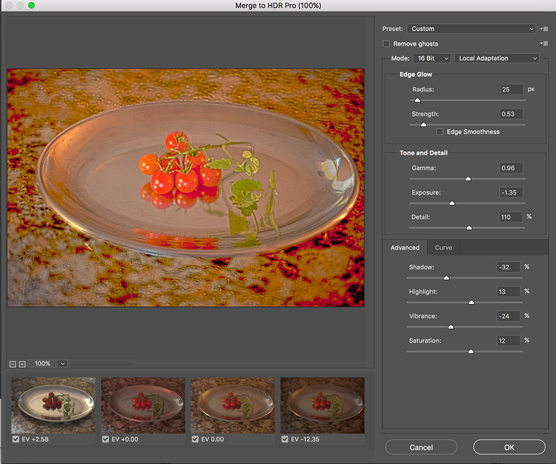 Merge to HDR opens after the images have been processed.

Each of the images in the merge is shown as a thumbnail below the preview. You can deselect each image to see what impact it has on the combined exposure. (After you click the green checkmark, give Merge to HDR Pro a couple of moments to redraw the preview.) If you’re working with seven exposures and one seems to degrade from the overall appearance, leave that thumbnail’s box deselected.

By default, Merge to HDR Pro assumes that you want control over the image right away and sets the Mode menu to 16-bit color and Local Adaptation. You then have the options shown previously, as well as a few others, including the Curve panel (as shown). 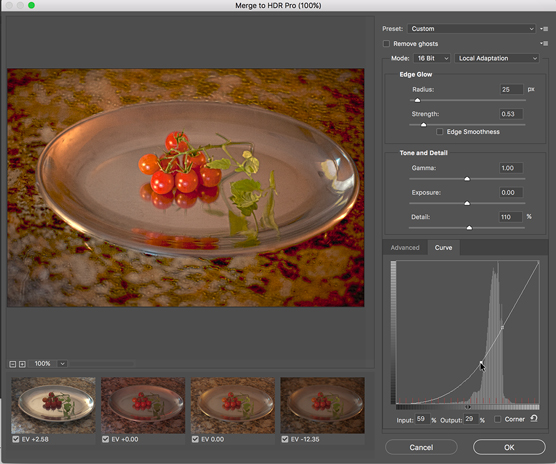 In 16-bit mode with Local Adaption, you have quite a bit of control.

So, what are all those options you see in these figures?

Switching the Mode menu to 32-bit color restricts your adjustment options. If you uncheck the Complete Toning in Adobe Camera Raw box, you can drag the slider to adjust the image’s white point. Clicking OK opens the image into Photoshop for any additional adjustments.

Note that 16-bit and 8-bit offer the same options, but I don’t recommend converting from 32-bit to 8-bit in Merge to HDR Pro. If you need an 8-bit version of the image, work in 16-bit, and then after perfecting the image in Photoshop and saving as a 16-bit PSD or TIFF file, use the Image → Mode→8-Bits/Channel command to convert and use Save As (or the Export menu’s Save for Web command) to save the 8-bit copy.

Want to fine-tune or change the image sometime down the road? Sure, why not? Simply reopen the saved 32-bit image and readjust, paint, filter, whatever, and then save again. Need a 16-bit copy to share or print? Save first as 32-bit, adjust, and then use Save As to create the 16-bit copy.