Explore Book Buy On Amazon
Swift is Apple’s programming language for developers to use with iOS and OS X devices.

Swift has been designed both to work alongside its predecessor, Objective-C, and to one day be Objective-C’s replacement. When you develop apps for iOS or OS X, you use the Xcode development tool (technically an Integrated Development Environment, or IDE), the Cocoa or Cocoa Touch frameworks, and a programming language —either Objective-C or Swift.

Swift inherits much of Objective-C’s functionality — anyone comfortable with Objective-C’s types, collections, functions, classes, and flow control will be familiar with those structures in Swift, as well.

The anatomy of a Swift class

Classes are the heart of any object-oriented programming language. Unlike classes in Objective-C and some other languages, Swift’s classes need no header declaration. Instead, you get the entire class (or structure or enumeration) definition in a format like this:

The code in this example defines a class. Note the following characteristics:

How to update Xcode for a new Swift release

New releases of Xcode (downloadable from developer.apple.com for the beta and pre-release versions and from the Mac App Store for released versions) include documentation and APIs for new versions of Swift and the Cocoa and Cocoa Touch APIs.

If you need to load older versions, go to the Downloads tab at Xcode→Preferences to review what needs to be downloaded. The unchecked items are available for download. The checked items have already been downloaded. 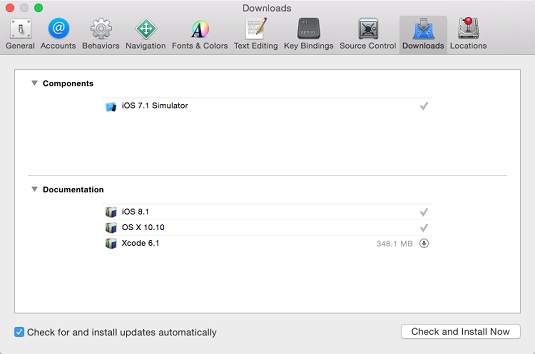 Working with both Swift and Objective-C

As of the start of 2015, almost all of the Cocoa and Cocoa Touch frameworks are written in Objective-C, and Swift can use them easily. (Of course it can; this was one of Swift’s design goals.)

Even so, some aspects of the frameworks work well in Swift, but perhaps not as elegantly as you might like. In particular, these include the issues involved with passing pointers (used a great deal in the Objective-C frameworks) to and from Swift.

Although developers inside Apple have been working with Swift for several years, most programmers only have half a year’s experience with the new language. In this short time, many developers have remarked on the fact that you still need to know a good bit about Objective-C to use Swift.

How much you’ll need to know is hard to say, since virtually everyone who uses Swift today is already highly experienced with Objective-C. The experienced coders notice the pieces of Objective-C peeking through the Swift code.

Jesse Feiler is a developer, web designer, trainer, and author. He has worked with mobile devices starting with Apple’s Newton and continuing with the Apple’s iOS and OS X products, including the iPhone and iPad. He is heard regularly on WAMC Public Radio’s The Roundtable.