Most tablets do have a clock. But not every tablet has a world clock like the iPad that lets you display the time in multiple cities on multiple continents. And not every device also has an alarm, a stopwatch, and a timer to boot.

You can tap the Clock icon on your Home screen or in Control Center and see what the Clock app is all about.

World clock on the iPad

Want to know the time in Beijing or Bogota? Tapping World Clock (inside the Clock app) lets you display the time in numerous cities around the globe. When the clock face is dark, it’s nighttime in the city you chose; if the face is white, it’s daytime outside. 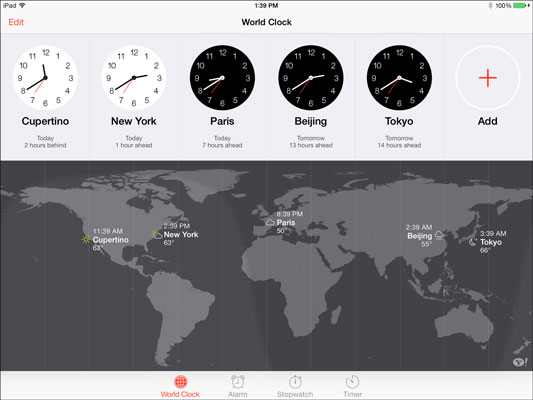 Tap the + in the middle of the clock in the upper-right corner of the screen (the one that says “Add”) to add a new city, then use the virtual keyboard to start typing a city name. 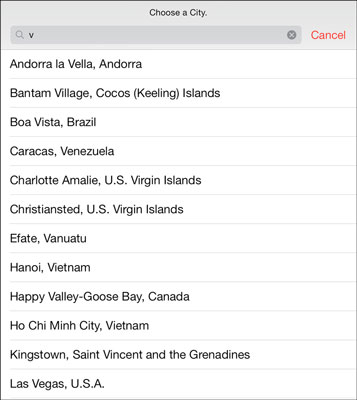 If there isn’t a clock with a + in the upper-right corner, you probably have six or more clocks already. To see the rest of the clocks and the clock with the + button, swipe the clocks from right to left.

The moment you press the first letter, the iPad displays a list of cities or countries that begin with that letter. So, typing V brings up Andorra la Vella, Andora; Bantam Village, Cocos (Keeling) Islands; and Boa Vista, Brazil, among myriad other possibilities. You can create clocks for as many cities as you like, though only six cities at a time appear onscreen.

To remove a city from the list, tap Edit and then tap the red circle with the white horizontal line that appears to the left of the city you want to drop. Then tap Delete.

You can also rearrange the order of the cities displaying the time. Tap Edit, and then press your finger against the symbol with three horizontal lines to the right of the city you want to move up or down in the list. Then drag the city to its new spot.

Alarm on your iPad

Ever try to set the alarm in a hotel room? It’s remarkable how complicated setting an alarm can be, on even the most inexpensive clock radio. Like almost everything else, the procedure is dirt-simple on the iPad:

That’s what you can do with a regular alarm clock. What’s the big deal, you say? Well, you can do even more with your iPad alarm:

Simple stuff, really. But if you want really simple and have anything except a second-generation iPad, you can ask Siri to set the alarm for you.

You know that an alarm has been set and activated because of the tiny status icon (surprise, surprise — it looks like a clock) that appears on the status bar in the upper-right corner of the screen.

An alarm takes precedence over any tracks you’re listening to on your iPad. Songs momentarily pause when an alarm goes off and resume when you turn off the alarm (or press the Snooze button).

Although it seems obvious, if you want to actually hear an alarm, you have to make sure that the iPad volume is turned up loud enough for you to hear.

Stopwatch in the Clock app on your iPad

If you’re helping a loved one train for a marathon, the iPad Stopwatch function can provide an assist. Open it by tapping Stopwatch in the Clock app.

Just tap Start to begin the count, and then tap Stop when your trainee arrives at the finish line. You can also tap the Lap button to monitor the times of individual laps.

Timer in the Clock app

Cooking a hard-boiled egg or Thanksgiving turkey? Again, the iPad comes to the rescue. Tap Timer (in the Clock app) and then rotate the hour and minute wheels until the length of time you desire is highlighted.

Tap the Sounds button near the bottom of the screen to choose the ringtone that will signify time’s up.

After you set up the length of the timer, tap Start when you’re ready to begin. You can watch the minutes and seconds wind down on the screen, if you have nothing better to do. Or tap Pause to pause the countdown temporarily.

If you’re doing anything else on the iPad — admiring photos, say — you hear the ringtone and see a Timer Done message on the screen at the appropriate moment. Tap OK to silence the ringtone.