The Keys to Successful Offensive Line Play in Football

In a football game, the offensive line’s job is to protect the quarterback. Linemen need to develop certain characteristics, both individually and as a unit, to effectively execute plays that keep the quarterback safe from the opposing team.

Offensive linemen often use a two-point, or up, stance, especially if the team plans to pass. The best two-point stance for a lineman is to be balanced, meaning that the right foot isn’t way back. When the foot is back too far, the lineman has a tendency to turn a little more, which gives the defensive player an opening to run through. This figure shows the proper two-point stance for an offensive lineman. 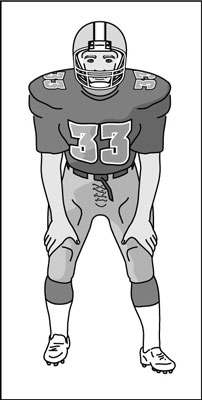 On normal downs, in which the offense may opt to run or pass the football, many teams put their linemen in a three-point stance, which means right hand on the ground and right foot back. 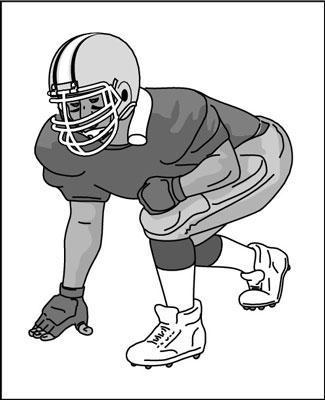 A player must get comfortable in this stance and also maintain his balance so that he doesn’t telegraph what he intends to do. The hand on the ground shouldn’t be too far forward as to cause a dip in the shoulders; those should be square. From that stance, you can pull to the right, pull to the left, set up, or drive straight ahead.

Having a solid base as an offensive lineman

An excellent offensive lineman is able to maintain proper balance. The key to proper balance is having a solid base. A lineman’s feet should be set a little wider than the width of his shoulders; that way, the torso is set like a perfect upside-down T. If the lineman can maintain this stance, in most cases, he won’t be knocked off his feet.

An important ingredient in offensive line play is toughness. Generally, toughness is an attitude a player develops over time. He must have a lot of self-pride and tell himself that no one will beat him. Being tough is a big part of every sport, and it’s a sign of a true competitor.

Practicing repetition to perfect the plays

Another key to an effective and cohesive offensive line lies in its practice repetition. On any level, many of the best running teams are those that run three or four basic plays. They keep repeating them, doing them over and over until they’re so proficient that no opponent can stop them. In NFL training camps, offensive lines constantly work together, everyone going through the hard times, the long, hot muggy days — everyone working when he’s tired. At some point, you have to rely on the guy next to you. Working together over and over in the heat of the day can develop real cohesiveness.