By: Howie Long and John Czarnecki and
Updated: 08-20-2019
From The Book: Football For Dummies

Explore Book Buy On Amazon
Football helmets and masks play a very important role in player safety. The football helmet and face mask are designed to protect a player’s face and head from serious injury. Many players also wear a mouth guard to protect their teeth and prevent themselves from biting their tongues. A few players even wear another protective cap on the outside of the football helmet for added protection. 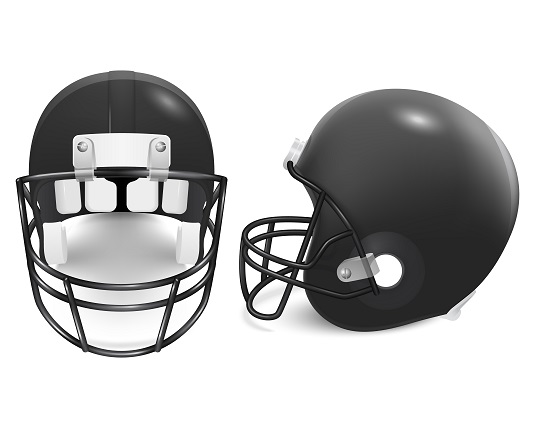 Football helmets are equipped with chin straps to keep them snugly in place. To prevent serious concussions, many helmets have air-filled pockets inside them. A player tests his helmet by sticking his head inside it and then shaking it for comfort, also making sure that it’s snug. If it’s too tight, he simply releases air from the air pockets.

Player safety is an increasingly important issue with concussions and other head injuries becoming a major concern. The NFL and the NFL Players Association, the union that represents all players, have worked together for years on uniform and football helmet improvements to better protect players from injury. As part of the NFL’s “Play Smart, Play Safe” initiative, the league allocated $60 million toward the development of better protective equipment, including helmets.

Because of the increase in concussions, the NFL reached a one-billion-dollar concussion settlement in 2017 with former players and their dependents. Families of all football players, from Pop Warner to high school, to college to the NFL, should be aware that many constructive and valuable helmet designs have been made in the last few years.

The NFL has worked with the players and its biomedical experts to assess 34 helmet models made by six companies that were worn in the 2018 season, determining which was best at reducing head impact severity experienced by players on the field.

The VICIS ZERO1 helmet ranked number one. However, 15 other helmets from Schutt, Xenith and Riddell are listed in the top performing group after laboratory testing. The NFL went so far as to ban 10 helmet models, although four of those designs were permitted to be worn by veteran players like Tom Brady and Drew Brees who were comfortable with the older football helmets and didn’t want to change. However, rookies were forbidden to wear similar models to what Brady and Brees use.

When you're watching a game, you may notice players wearing football helmets of slightly different shapes and designs. Players are allowed to choose the helmet design that works best for them as long as the helmet design is certified by the National Operating Committee on Standards for Athletic Equipment.

All football helmets are equipped with face masks. The rounded metal material that composes all face masks can’t be more than 5/8-inch in diameter. Most linemen wear a face mask called a cage, which has a bar extending down from the middle and top of the football helmet to below the nose area. There, this bar joins two or three bars that extend from both sides that completely prevent an opponent’s hands from reaching inside the face area and under the chin.

However, few quarterbacks and receivers have a face mask with a bar coming between their eyes, because they want to ensure they can see clearly; many also leave the chin exposed. Twenty years ago, some quarterbacks wore a helmet with a single bar across the face. Today, you may see a punter or kicker with a helmet that has a single bar, but players who encounter more contact during games want more protection.

Some football helmets also have a sunshade across the eyes to prevent sun glare from interfering with the player’s vision. This sunshade also keeps opponents from seeing the player’s eyes, which may give the player an advantage because opponents can’t see where the player is looking.

Regardless which football helmet design you choose, it is very important to take the necessary precautions to keep players safe and protected.