By: Howie Long and John Czarnecki and
Updated: 08-20-2019
From The Book: Football For Dummies

This offensive football play has become common in the last decade as teams with versatile receivers use them as runners. As you can see below, the receivers line up in their normal positions, and one of them goes in motion toward the quarterback.

After the ball is snapped, the quarterback simply flips the ball to receiver as he passes in front of him. The play is blocked like a typical sweep run. Teams that use this play a lot, like the Los Angeles Rams, can also use the fly sweep design as deception, faking the handoff and then either throwing to the receiver as he runs downfield or to another receiver. 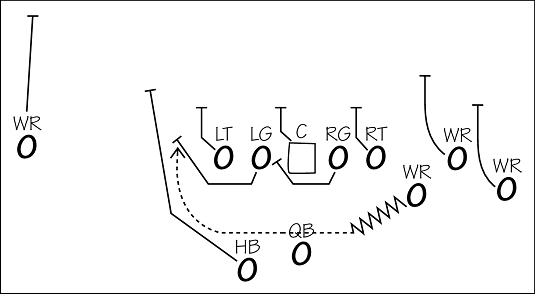 In a fly sweep, the receiver is the ball carrier.

For a quarterback to run this offensive football play, he must possess the skills and toughness of a running back. But he also must correctly read the intent of defenders. The beauty of the play, if performed correctly, is the stress it puts on the defense. Not only can the quarterback pull the ball back from the running back and take off running, but he can step back and throw to a receiver running a slant pass.

In high school and college, teams with exceptional athletic quarterbacks can have a high-scoring offense because defenses at that level generally don’t have enough speedy defenders to stop this offensive football play. As you can see in the image below, the quarterback reads a second-level defender and decides whether to pass the ball or hand it off based on the defenses post-snap movement.

If he doesn’t like either of those options, the quarterback can elect to run where the blockers planned to block for the running back or make a split-second decision to find his own running lane. If the “read” defenders attacks the line of scrimmage to help against the run, the QB throws to the WR running a slant. The WR should be open with the defender vacating his area of the field. If the “read” defender decides to defend the slant pass, the QB hands the ball off to the RB. Now the offense has as many blockers as the defense has run defenders in the tackle box. 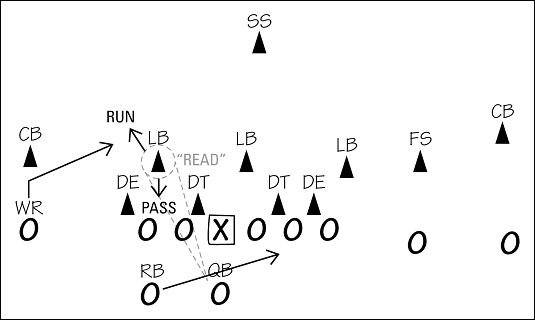 In the run-pass option, the QB has to option to hand off, run, or pass the ball.

Opt for possession passes with the bubble screen

Possession passes offer another option for an offensive play in football. Most of the time, a possession pass is a short throw, between 8 and 10 yards, to either a running back or a tight end. The intent isn’t necessarily to gain a first down but to maintain possession of the ball while gaining yardage. Often, teams call possession passes several times in a short period to help the quarterback complete some easy passes and build his confidence.

One high-percentage pass is the bubble screen pass in which three potential receivers align to one side of the offensive formation, allowing the quarterback to throw to one of them while the other two receivers block on the play against whatever defenders are aligned to that side. Often the play can pick up big yardage if the blocking receivers do their job effectively.

Also, with such a formation, overloaded to one side, teams have been known to run or even throw in the oppostive direction, kind of a misdirection play. 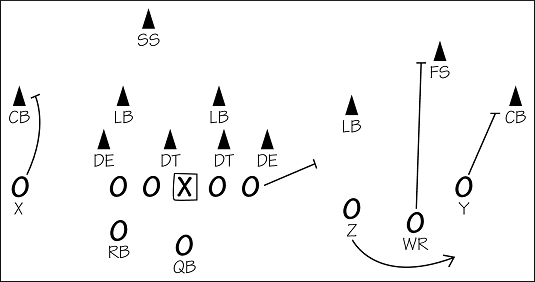 Here’s something you should know about offensive plays in football: No perfect play exists for every occasion. In strategy sessions prior to a game, a play may look like it will result in a long gain, but in reality it may not succeed for various reasons. It may fail because someone on the offensive team doesn’t execute or because a defensive player simply anticipates correctly and makes a great play. Things happen!