Chia and the Aztecs

By: Barrie Rogers and Debbie Dooly and
Updated: 03-26-2016
From The Book: Cooking with Chia For Dummies

Cooking with Chia For Dummies 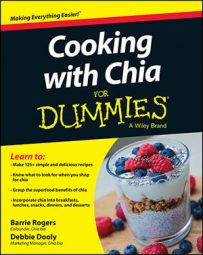 Evidence that the Aztecs used chia appears in codices written 500 years ago. Codices were documents written in Nahuatl, the native language of the Aztecs, as well as in Spanish. A lot of them described life at that time and in them; you can see evidence of why chia was used.

Chia was one of four main crops grown by the Aztec cultures. The other three were amaranth, maize (corn), and beans. These four crops served as the basis for the Aztecs’ daily diets. Chia seeds were eaten alone, mixed with other grains, ground into flour, used in drinks, and pressed for oil to be used as body and face paints.

Another use for chia was in religious ceremonies. The Aztecs thought so much of chia that they offered the seeds to their gods as worship. They were also paid as tributes to Aztec rulers from conquered nations. One codex describes how 4,410 tons of chia were paid annually to the Aztec Empire.

Chia was valued by the Aztec cultures because of the strength, stamina, and endurance that it provided to their people. A tablespoon of chia was said to sustain Aztec warriors for an entire day!

The seeds were also used as medicine and prescribed for wounds, joint pain, sore throats, and sore eyes. Although the Aztecs didn’t have the scientific knowledge we do today, they knew that the seeds were highly nutritious. They valued chia as a hugely important crop that could be used for many purposes.

Barrie Rogers is cofounder of Chia bia and chiabia.com, an Irish chia company and website that provides a wealth of information about chia seeds and health and offers a number of chia products for sale, including seeds, bars, and beverages. Debbie Dooly is Marketing Manager of Chia bia.