How to Determine the Positions of the Stars

Explore Book Buy On Amazon
Astronomers used to call stars "fixed stars," to distinguish them from the wandering planets. But in fact, stars are in constant motion as well, both real and apparent. The whole sky rotates overhead because Earth is turning. The stars rise and set, like the Sun and the Moon, but they stay in formation.

The stars that make up the Great Bear don't swing over to the Little Dog or Aquarius, the Water Bearer. Different constellations rise at different times and on different dates, as seen from different places around the globe.

Actually, the stars in Ursa Major (and every other constellation) do move with respect to one another — and at breathtaking speeds, measured in hundreds of miles per second. But those stars are so far away that scientists need precise measurements over considerable intervals of time to detect their motions across the sky. So 20,000 years from now, the stars in Ursa Major will form a different pattern in the sky. (Maybe they will even look like a Great Bear.)

In the meantime, astronomers have measured the positions of millions of stars, and many of them are tabulated in catalogs and marked on star maps. The positions are listed in a system called right ascension and declination — known to all astronomers, amateur and pro, as RA and Dec:

A few simple rules may help you remember how RA and Dec work and how to read a star map: 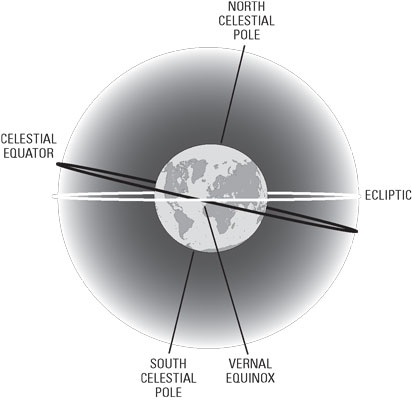 Decoding the celestial sphere to find directions in space.

Suppose you want to find the NCP as visible from your backyard. Face due north and look at an altitude of x degrees, where x is your geographic latitude. I'm assuming that you live in North America, Europe, or somewhere in the Northern Hemisphere. If you live in the Southern Hemisphere, you can't see the NCP. You can, however, look for the SCP. Look for the spot due south whose altitude in the sky, measured in degrees above the horizon, is equal to your geographic latitude.

In almost every astronomy book, the symbol ″ means seconds of arc, not inches. But at every university, a student in Astronomy 101 writes on a lab report, "The image of the star was about 1 inch in diameter." Understanding beats memorizing every day, but not everyone understands.

Here's the good news: If you just want to spot the constellations and the planets, you don't have to know how to use RA and Dec. Just consult a star map drawn for the current week or month (you can find these on the website of Sky & Telescope or other magazines, in the magazines themselves, or using a desktop planetarium program for your home computer or a planetarium app for your smartphone or tablet). But if you want to understand how star catalogs and maps work and how to zero in on faint galaxies with your telescope, understanding the system helps.

And if you purchase one of those snazzy and surprisingly affordable telescopes with computer control, you can punch in the RA and Dec of a recently discovered comet, and the scope points right at it. (A little table called an ephemeris comes with every announcement of a new comet. It gives the predicted RA and Dec of the comet on successive nights as it sweeps across the sky.)