Making Heads and Tails of a Comet's Structure

Explore Book Buy On Amazon
A comet is a stuck-together mixture of ice, frozen gases (such as the ices of carbon monoxide and carbon dioxide), and solid particles — the dust or "dirt" shown here. Historically, astronomers described comets as having a head and tail or tails, but with additional research, they've been able to clarify the nature of a comet's structure.

A comet is really just a dirty ice ball.

Astronomers initially named a bright point of light in the head of a comet the nucleus. Today we know that the nucleus is the true comet — the so-called dirty ice ball. The other features of a comet are just emanations that stem from the nucleus.

A comet far from the Sun is only the nucleus; it has no head or tail. The ice ball may be dozens of miles in diameter or just a mile or two. That size is pretty small by astronomical standards, and because the nucleus shines only by the reflected light of the Sun, a distant comet is faint and hard to find.

Images of Halley's nucleus from a European Space Agency probe that passed very close to it in 1986 show that the lumpy, spinning ice ball has a dark crust, like the tartufo dessert (balls of vanilla ice cream coated with chocolate) served in fancy restaurants. Comets aren't so tasty, but they are real treats to the eye. Here and there on Halley's nucleus, the probe photographed plumes of gas and dust from geyserlike vents or holes, spraying into space from areas where the Sun was warming the surface. Some crust! And in 2004, NASA's Stardust probe got close-up images of the nucleus of Comet Wild-2. This nucleus seems to bear impact craters and is marked with what may be pinnacles made of ice. Those are the cold facts.

Not all comet nuclei are shaped like Halley's, though. In August 2014, the Rosetta spacecraft reached Comet 67P/Churyumov–Gerasimenko, known as 67P to its friends (like me). Rosetta orbited the comet nucleus while the comet orbited the Sun until the end of the European Space Agency mission in September 2016. Its photographs revealed a nucleus shaped roughly like a dumbbell with two unequal weights. Astronomers referred to the "weights" as two lobes of the comet connected by a thinner structure they named the neck. Some astronomers stuck their necks out by theorizing that the odd-shaped nucleus was formed by the low-speed collision of two earlier objects.

As a comet gets closer to the Sun, solar heat vaporizes more of the frozen gas, and it spews out into space, blowing some dust out, too. The gas and dust form a hazy, shining cloud around the nucleus called the coma (a term derived from the Latin for "hair," not the common word for an unconscious state). Almost everyone confuses the coma with the head of the comet, but the head, properly speaking, consists of both the coma and the nucleus.

The glow from a comet's coma is partly the light of the Sun, reflected from millions of tiny dust particles, and partly emissions of faint light from atoms and molecules in the coma.

A tale of two tails

The dust and gas in a comet's coma are subject to disturbing forces that can give rise to a comet's tail(s): the dust tail and the plasma tail. (Sometimes when you view a comet, you see just one kind of tail, but when you're lucky, you see both.)

The pressure of sunlight pushes the dust particles in a direction opposite the Sun, producing the comet's dust tail. The dust tail shines by the reflected light of the Sun and has these characteristics: 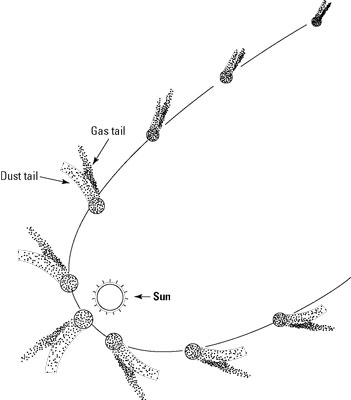 A comet's tail points away from the Sun.

The other type of comet tail is a plasma tail (also called an ion tail or a gas tail). Some of the gas in the coma becomes ionized, or electrically charged, when struck by ultraviolet light from the Sun. In that state, the gases are subject to the pressure of the solar wind, an invisible stream of electrons and protons that pours outward into space from the Sun. The solar wind pushes the electrified cometary gas out in a direction roughly opposite of the Sun, forming the comet's plasma tail. The plasma tail is like a wind sock at an airport: It shows astronomers who view the comet from a distance which way the solar wind is blowing at the comet's point in space.

In contrast to the dust tail, a comet's plasma tail has the following:

Now and then, a length of plasma tail breaks from the comet and flies off into space. The comet then forms a new plasma tail, much like a lizard that grows a new tail when it loses its first one. The tails of a comet can be millions to hundreds of millions of miles long.

When a comet heads inward toward the Sun, its tail or tails stream behind it. When the comet rounds the Sun and heads back toward the outer solar system, the tail still points away from the Sun, so the comet now follows its tail. The comet behaves to the Sun as an old-time courtier did to his emperor: never turning his back on his master. The comet shown could be going clockwise or counterclockwise, but either way, the tail always points away from the Sun.

The coma and tails of a comet are just a vanishing act. The gas and dust shed by the nucleus to form the coma and tails are lost to the comet forever — they just blow away. By the time the comet travels far beyond the orbit of Jupiter, where most comets come from, it consists of only a bare nucleus again. And the nucleus is a little smaller, due to the gas and dust that it sheds. The dust the comet loses may someday produce a meteor shower, if it crosses Earth's orbit.

Halley's comet is a good example of the wasting-away process. Halley's nucleus decreases by at least a meter (39.37 inches, or slightly more than a yard) every 75 to 77 years when it passes near the Sun. The nucleus is only about 10 kilometers (10,000 meters or 6.2 miles) in diameter right now, so Halley's comet will survive only about 1,000 more orbits, or about 75,000 years. Dust shed by the famous comet causes two of the top annual meteor showers, the Eta Aquarids and the Orionids.