Explore Book Buy On Amazon
Normally, only a few meteors per hour are visible — more after midnight than before and (for observers in the Northern Hemisphere) more in the fall than in the spring. But on certain occasions every year, you may see 10, 20, or even 50 or more meteors per hour in a dark, moonless sky far from city lights. Such an event is a meteor shower, when Earth passes through a great ring of billions of meteoroids that runs all the way around the orbit of the comet that shed them.

The following figure illustrates the occurrence of a meteor shower. 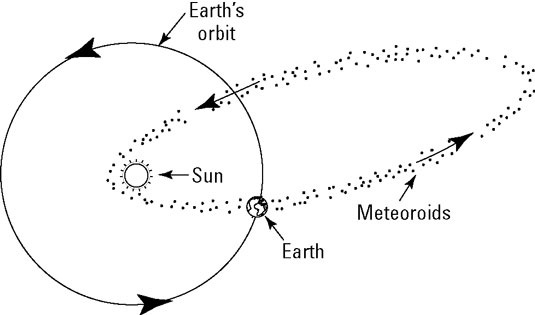 Earth's path crossing a belt of meteoroids creates a shower of meteors.

The direction in space or place on the sky where a meteor shower seems to come from is called the radiant. The most popular meteor shower is the Perseids, which, at its peak, produces as many as 80 meteors per hour. (The Perseids get their name because they seem to streak across the sky from the direction of the constellation Perseus, the Hero, their radiant. Meteor showers are usually named for constellations or bright stars [such as Eta Aquarii] near their radiants.)

A few other meteor showers produce as many meteors as the Perseids, but fewer people take the time to observe them. The Perseids come in August, when the balmy nights in North America and Europe often are perfect for skywatching, but the other leading meteor showers — the Geminids and Quadrantids — streak across the sky in December and January, respectively, when the weather is worse in the Northern Hemisphere and observers' ambitions are limited.

The table lists the top annual meteor showers. The dates in the table are the nights when the showers usually reach their peak. Some showers go on for days, and others for weeks, raining down meteors at lower rates than the peak values. The Quadrantids may last for just one night or only a few hours.

The Quadrantids' radiant is in the northeast corner of the constellation Bootes, the Herdsman. The meteors are named for a constellation found on 19th-century star charts that astronomers no longer officially recognize. In addition to losing their namesake, the Quadrantids seem to have lost the comet that spawned them — their origin was a mystery until 2003, when astronomer Petrus Jenniskens found that an object named 2003 EH1 may be their parent comet.

The Geminids are a meteor shower that seems to be associated with the orbit of an asteroid rather than a comet. However, the "asteroid" is probably a dead comet, which no longer puffs out gas and dust to form a head and tail. The object 2003 EH1, the likely parent of the Quadrantids, may be a dead comet, too.

The Leonids are an unusual meteor shower that occurs around November 17 every year, usually to no great effect. But every 33 years, many more meteors are present than usual, perhaps for several successive Novembers. Huge numbers of Leonids were seen in November 1966 and again in November 1999, 2000, 2001, and 2002, at least for brief times at some locations. The next great display likely will come in 2032. Don't forget to look for it.

You almost never see as many meteors per hour as lsited. The official meteor rates are defined for exceptional viewing conditions, which few people experience nowadays. But meteor showers vary from year to year, just like rainfall. Sometimes people do see as many Perseids as listed. On rare occasions, they see many more than expected. Such inconsistency is why keeping accurate records of the meteors that you count can be helpful to the scientific record.

Do you live south of the equator? If so, check out the list of meteor showers visible from the Southern Hemisphere on the website of the Royal Astronomical Society of New Zealand.

To track meteors, you need an accurate time source, a way to record your observations, and a dim flashlight to see what you're doing.

The best light for astronomical observations is a red flashlight, which you can purchase, or make from an ordinary flashlight by wrapping red transparent plastic around the bulb. Some astronomers paint the lamp with a thin coat of red nail polish. If you use a white light, you dazzle your eyes and make it impossible to see the fainter stars and meteors for 10 to 30 minutes, depending on the circumstances. Letting your vision adjust to the dark is called getting dark adapted and is a step you want to take every time you observe the night sky.

The best way to watch and count meteors is to recline on a lounge chair. (You can do pretty well just lying on a blanket with a pillow, but you're more likely to fall asleep in that position and miss the best part of the show.) Tilt your head so you're looking slightly more than halfway up from the horizon to the zenith — the optimum direction for counting meteors. Take notes. And be sure you have a thermos of hot coffee, tea, or cocoa! 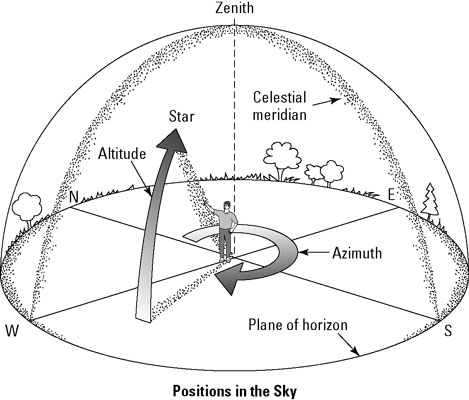 Tilt your head halfway between the horizon and the zenith for optimum meteor viewing.

You don't have to face the radiant when you observe a meteor shower, although many people do. The meteors streak all over the sky, and their visible paths may begin and end far from the radiant. But you can visually extrapolate the meteors' paths back in the direction from which they seem to come, and the paths point back to the radiant. Identifying a radiant in that way is how you can tell a shower meteor from a sporadic one.

If you do face the radiant, however, you see some meteors that seem to have very short paths, even though they appear fairly bright. The paths appear short because the meteors are coming almost right at you. Fortunately, the shower meteoroids are microscopic and won't make it to the ground.

For more information on meteor showers, including historical events, facts, and advice on observing, head to the Sky and Telescope site and enter "Shooting Stars" in the search window. Then you can download the free Shooting Stars e-book (you may have to register your email address).