James Earl "Jimmy" Carter, Jr., grew from the rural south to become peanut mogul, a state senator, the governor of Georgia, and eventually the 39th President of the United States. Though some might consider the presidency the crowning achievement in one's life, Jimmy Carter's ongoing, worldwide humanitarian efforts after his presidency leave a legacy that exceeds the mark he left on the world as President.

Carter's political career started in 1960, when he won a seat on a local school board in his hometown of Plains, Georgia. Two years later, he was elected to the Georgia state senate. By 1966, Carter thought that he was ready for the governorship. He entered the race, but following his loss at a disappointing third, he fell into a major depression, thinking his political career was over.

His sister encouraged him to find religion, and Carter became born again, turning himself into an Evangelical Christian. With his new courage, he ran for governor again in 1970.

Carter learned from his 1966 gubernatorial run that a moderate Democrat couldn't win in Georgia, so he turned his campaign around and ran as a conservative Democrat. He also played the race card: his campaign showed his major opponent, Carl Sanders, joking with a black athlete. The strategy won him the segregationist vote and the governorship.

As governor, Carter changed his tune right away. He pushed for education reform, environmental protection, and especially civil rights. In his inaugural address, he declared, "The time for racial discrimination is over." He hung a picture of Dr. Martin Luther King, Jr., in the governor's mansion. And Carter wasn't just talk: He appointed many African Americans to high-level state offices.

In 1976, Jimmy Carter was the Democrat least likely to win the presidency. The governor of a small southern state, he had no national political experience. In earlier times, the lack of experience would have sunk any other candidacy, but after the recent Watergate scandal in Richard Nixon's term, the U.S. public was sick and tired of politics as usual. They wanted someone new — an outsider with no ties to Washington.

As early as 1972 — just two years into his governorship — Carter wanted to be president. He established a campaign committee and had a detailed strategy drawn up. In 1974, the Democratic Party appointed Carter to head the Democratic National Campaign Committee, which was in charge of raising money for Democratic candidates throughout the country. From that position, he decided to run for president himself.

Carter announced his candidacy early in 1975. He was virtually unknown, and nobody gave him much of a chance, but he campaigned hard and kept discussion of his position vague on various issues while calling for a return to morality and an end to corruption in the federal government. Carter's platform resonated with a public that had recently dealt with both Vietnam and Watergate, and he won 17 of 30 primaries.

At the Democratic convention, Carter received the nomination on the first ballot. To placate northern liberals and unions, he nominated liberal Minnesota Senator Walter Mondale as his vice president.

Though at one point he had a huge lead, he won the presidency with 297 electoral votes to Ford's 240. (One elector cast a vote for Ronald Reagan, who was not a candidate.) Much of his support came from African Americans and the southern states. 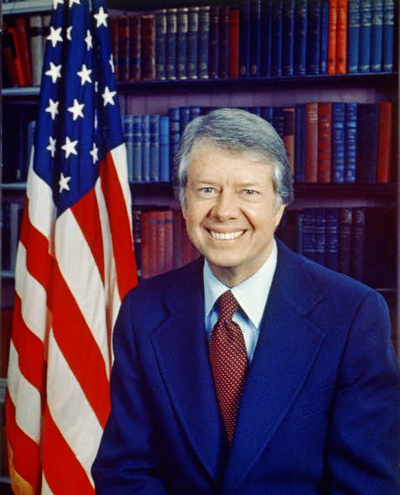 Credit: Image courtesy of the Library of Congress.

Carter's results as president were mixed. Things started out well for him. On his first day in office, he pardoned all Vietnam draft evaders. He was able to get important environmental legislation passed, and he established the Department of Education to improve instructional standards throughout the United States. However, a number of international problems (many of which he had no control over) cast a shadow over his presidency.

Most of Jimmy Carter's domestic problems centered on the issue of energy. In 1979, OPEC (Organization of Petroleum Exporting Countries) increased oil prices dramatically. This led to inflation. By 1980, loan interest rates had hit 20%. Most people were unable to finance homes and cars. Carter took the blame for all of it.

On the bright side, Carter managed to pass legislation that encouraged the development of alternative energy in an effort to decrease dependence on foreign oil. Unfortunately, these programs were dismantled by his successors.

Carter attempted to base his foreign policy on human rights considerations, even cutting off aid to friendly dictatorships if they violated human rights, which led to disastrous results. By 1978, the pro-American governments in Nicaragua and Iran had collapsed. Other foreign policy events largely considered failures include

On the other hand, Carter did have at least one shining moment of international success as President. In September 1978, Carter brought Israeli Prime Minister Menachem Begin and Egyptian President Anwar Sadat together at Camp David, Maryland. After long negotiations, the Camp David Accords, which ended the state of war between Israel and Egypt, were finalized. Sadat and Begin won the Nobel Peace Prize for negotiating the accord.

In 1980, after a heated battle with Senator Ted Kennedy for the Democratic nomination, Carter was forced to campaign on a liberal platform. He also had a lot of political baggage weighing him down, not the least of which was the ongoing Iran hostage crisis. On the Republican side, presidential nominee Ronald Reagan campaigned on an agenda of making the United States great again.

When the election results came in, Reagan had won in a landslide, and the Democrats lost control of the Senate for the first time since the 1950s.

When Jimmy Carter lost the 1980 election, he didn't stop working for the values he believed in:

His ongoing efforts have garnered him well-earned praise and recognition:

Though Jimmy Carter's presidency is largely considered a failure, what he has done since has restored his reputation and earned him respect and recognition around the world as a peacemaker and humanitarian.