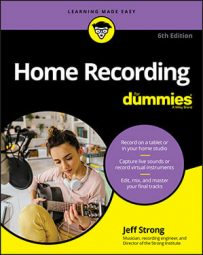 Explore Book Buy On Amazon
Recording music at home means you play several roles — producer, mixer, and probably musician, too. Be sharp by knowing recording-studio lingo and how to get "your effects" by setting effects parameters for reverb and the compressor quickly and easily. 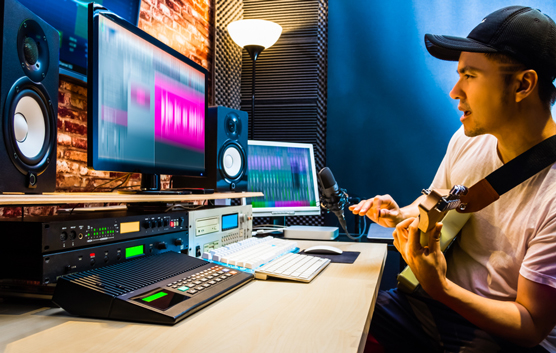 Words to know as a music producer

When you produce your own music at home, you need to know the language of the music-recording industry. This glossary lets you in on the secret (or not-so-secret) language of the record producer. Read and be enlightened (or not)!

Air: Refers to frequencies above 12 kHz. A quality that allows the song to breathe a little. A feeling of spaciousness. Similar to shimmer.

Angular: This means nothing. If people use this term, ask them to explain themselves. They’ve just gone over the deep end.

Body: The frequency range of an instrument where it produces its richest tone, often around 800 Hz to 1 kHz.

Boomy: Too much low-frequency energy. To get rid of boominess, cut frequencies below 120 Hz.

Brown: A term for the sound that Eddie Van Halen used to get from his guitar amp. Brown usually refers to a low midrange quality (200 to 400 Hz) — not to be confused with muddy, however.

Cold: Lacking warmth. Often used as a derogatory term to describe digital recordings. It could also mean too much high end in a recording. In this case, reduce frequencies above 10 kHz slightly.

Depth: Full-bodied sound. Often the result of enhancing frequencies just above and below the main body of the instrument.

Dry: An instrument without effects applied to it.

Edgy: An extreme of punchy, bordering on uncomfortable, depending on the music.

Harsh: Another derogatory term for digital recordings. This could also refer to frequencies in the 5-kHz to 8-kHz range that are too pronounced. Reduce harsh frequencies to suit your taste.

Nasally: Too much midrange energy, around 1 to 2 kHz in some instruments.

Orange: Get this guy out of your studio; he’s just making stuff up!

Plosives: The result of saying or singing p or other stop consonant sounds(t, g, k, d, b).

Presence: A nice balance between an instrument’s attack and its main tone. Usually attained by adding 2- to 5-kHz frequencies.

Punchy: A nice attack and sense of presence. A punchy sound can come from your performance, your instrument, or the effective use of compression (or all three). To create punch with a compressor, set the threshold to compress just a couple of decibels (dB), set the attack long enough so that the initial transient passes through uncompressed, and set the release so that it doesn’t remain longer than the instrument and so that it isn’t short enough to pump the compressor.

Round: Sometimes refers to sounds that have a pronounced midrange quality. When a sound is round, bass and treble are slightly reduced.

Smooth: The opposite of punchy. Smooth sounds are those that have an even level to them. The body of the sound is not overshadowed by the initial attack.

Sweet: Good or great, depending on how enthusiastically you use the word.

Warm: Lacking harshness or coldness. This is a catchall term used to describe anything from analog equipment to a pleasing quality that can’t be put into words. Use this term around nonrecording people whenever you want to sound like you know what you’re talking about. When someone else uses this term repeatedly, take his or her recording advice with a grain of salt (a large one).

Wet: An instrument with effects applied to it.

Every effect (signal processor) that you use in your home-recording studio has certain settings, called parameters, which you can adjust to tailor the sound to your liking. The compressor and reverb are the two most common effects (signal processors).

Reverb is a natural part of every sound and represents the way a room sounds as a sound bounces around it.

The compressor is used to compress the dynamic range of your signal and is used in all the stages of recording: tracking, mixing, and mastering.