How to Use Automatic Formatting in Word 2013

AutoFormat controls some minor text formatting as you type. The settings are visible in the AutoFormat dialog box. 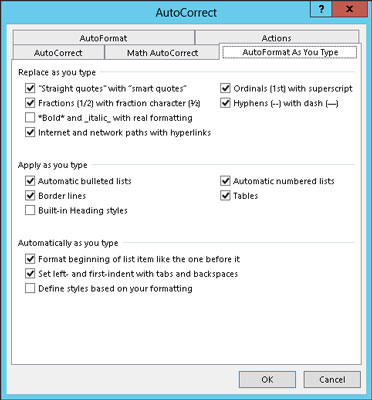 To display that dialog box, heed these steps:

The best way to demonstrate the AutoFormat-as-you-type concept is to have a Word document on the screen and then type examples. Note that these samples demonstrate only a few of the things AutoFormat can do.

The quote characters on the keyboard are tick marks: " and '. AutoFormat converts them into the more stylish open and closed curly quotes. Type hither:

Both the single and double quotes are properly used and converted.

You can format a fraction by typing the first value in superscript, the slash mark, and then the second value in subscript. Or you can let AutoFormat do it for you. Here’s an example:

I spend twice the time doing 1/2 the work.

The characters 1/2 are converted into the single character 1/2. This trick works for some, but not all, common fractions. When it doesn't work, use the superscript/subscript trick.

Word can underline and activate hyperlinks that are typed in your document, such as

The website is automatically underlined, colored, and turned into an active web page link for you. (You have to Ctrl+click to follow the link.)

You're guessing wrong if you think that ordinals are a baseball team or a group of religious leaders. They're numbers that end in the letters st, nd, or rd, as this line demonstrates:

An em dash is the official typesetting term for a long dash, longer than the hyphen (or its evil twin, the en dash). Most people type two hyphens to emulate the em dash. Word fixes that problem:

As you type the--(dash-dash), AutoFormat replaces it with the official em dash character.