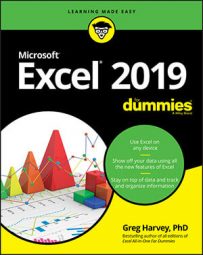 Explore Book Buy On Amazon
Office 2019 is the most touch-aware Office version to date, with features that can annotate Office files with comments and sketches, convert handwriting to text, and even convert freehand drawings to vector line art images. All these activities are collectively known as inking. Some of the inking features are available only if you have a touchscreen device such as a Microsoft Surface computer and an active stylus, but other features work with any touch-screen device (even if you are just using your finger to draw), and still others can be used on non-touch devices by "drawing" with an ordinary mouse or trackball. This article takes a look at the inking capabilities of Office 2019.

What Are Microsoft Surface Devices?

Microsoft Surface is Microsoft's own line of computers with touch-sensitive screens. There are several models, all sharing one thing in common: the focus on touch-screen input. A stylus is preferred for touch-screen entry, but you can also use fingers. Early models came with a stylus pen, but with current models, the stylus pen is sold separately.

Surface devices, as well as many other devices with touch-sensitive screens, are designed to accept input from stylus pens. However, not all stylus pens are created equal. Some pens are positional, which means they detect the location of the tip in relation to the screen. Other pens are camera-based, using digital-enabled paper to detect where the stylus touches the writing surface. Accelerometer pens detect the pen movement and the contact with the writing surface.

The type of pen that works with the latest Microsoft Surface products is an active pen, which is a more advanced technology than any of the others. An active pen has its own electronic components inside the pen that transmit data to the pen controller in the computer (or added on to the computer). Some active pens also have buttons on them that have special functions in certain applications. (For example, a pen might have a clickable eraser button on the top that advances the slide show in PowerPoint.)

Microsoft Surface devices require an active pen if you want to take advantage of the full array of inking features in Office 2019 and other applications. That's not to say that other pens won't work at a basic level, though. If you are using the pen primarily as a mouse replacement, touching the screen to click or drag things, just about any pen will do. It's only when you get down to pen-specific functions such as creating shaded drawings or writing a lot of hand-written notes that the active pen becomes important.

The company that makes the latest Surface-compatible active pens is called N-Trig. It was purchased by Microsoft in 2015.

Here are some of the features that distinguish one pen from another:

Can I Use a Stylus Pen with Other PCs and Tablets?

Yes, as long as the device supports that type of stylus pen. You can use a Surface pen with a non-surface device that has a touch-screen that works with active pens, and you can use other brands of pens with a Microsoft Surface device. Compatibility is conditional though, depending on the generation and technology; you aren't going to be able to use the latest-technology pen with a 10-year-old tablet, and vice-versa.

Now that you understand the basics of stylus pen technology, let's take a look at how Microsoft Office puts stylus pens to work.

Adding the Draw Tab to the Ribbon

Some of the tools on the Draw tab are the same in every Office 2019 application. Excel has the fewest inking features available, so let's look at that app first.

To draw, click the Draw button on the Drawing tab. This activates whichever pen, pencil, or highlighter is selected in the Pens group. When a pen is selected, it has a down arrow on its button. You can click this down arrow to open a menu to customize the tool (color, thickness, and so on). The color and thickness choices in Excel and PowerPoint are pretty basic, but in Word, you have a lot more choices, including sparkly glitter rainbow pens! 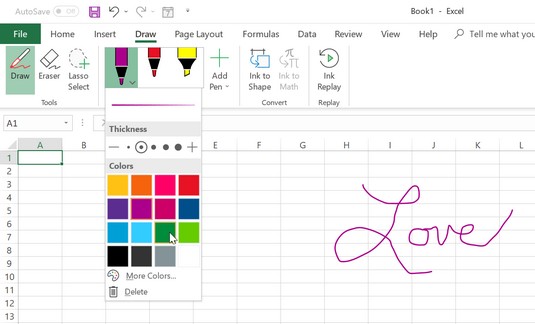 To add a new pen to the Pens gallery, click Add Pen and then choose Pen, Pencil, or Highlighter as desired. A new pen is added to the gallery with a down arrow on it so that you can customize it.

In addition to the basic tool set covered in the preceding section, Word 2019 has a couple of unique inking features.

The Ink Editor enables you to edit typed documents using your stylus pen. This feature can come in handy if you need to edit documents when your device is in tablet mode (no hardware keyboard available), for example.

To try out the Ink Editor, do the following:

The Drawing Canvas creates a rectangular box within a document where you can draw. Sure, you can draw anywhere on a document, but the drawing tends to get intertwined with the document text. By creating a drawing canvas, you localize the drawing to one place, and you can work with the entire canvas as a single object. 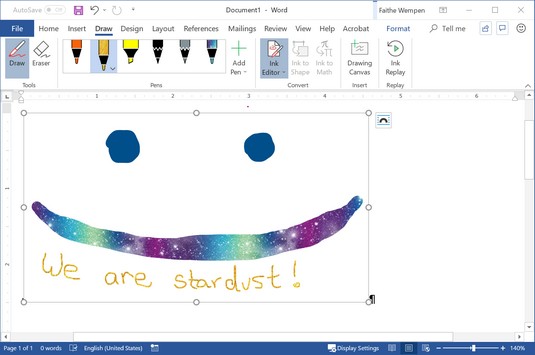 Have fun with the Drawing Canvas.

The Drawing Canvas is also a great place to try out the special drawing capabilities of an active stylus pen. Try, for example, varying the angle and pressure of the pen for interesting drawing effects.

While PowerPoint doesn't have the glitter rainbow ink that Word does, it does have a couple of very good features: a drawing ruler and an Ink to Text feature.

Because PowerPoint is the go-to Microsoft Office application for creating simple graphics (because of the large, wide-open canvas areas that slides provide), it's not uncommon to want to draw freehand on a PowerPoint slide, either with the stylus pen or with the drawing tools (Insert → Shapes).

The Ruler tool (on the Draw tab) gives you an on-screen ruler; you can then use your pen stylus to draw on the slide, and the line will align neatly with the ruler edge. You can even tilt the ruler to any angle and move it around.

You can also use the ruler to align individual items or groups of items. Select an item and drag it until its selection handle snaps to the ruler. Or select multiple items (use the Ctrl key) and then drag the set to snap to the ruler.

Sometimes when you are giving a presentation, you might annotate it with some handwritten notes onscreen. Later you may want to go back and convert those notes to typed text. PowerPoint 2019 makes it easy to do that. Try it out:

Greg Harvey began training business people to use computers and software back in the days of DOS. He is the author of numerous For Dummies books, including all editions of Excel All-in-One For Dummies, Excel Workbook For Dummies, and Excel For Dummies . He has worked as an independent trainer and as an instructor at Golden Gate University.