By: Joseph Schmuller and
Updated: 10-21-2016
From The Book: Statistical Analysis with Excel For Dummies

Here, you see an example of CORREL along with the Function Arguments dialog box for CORREL. 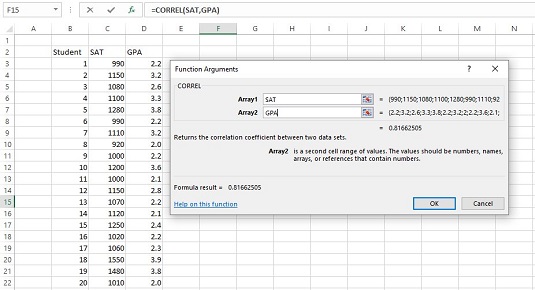 The Function Arguments dialog box for , along with data.

If you have to quickly calculate the coefficient of determination (r2), RSQ is the function for you. There really is no particular need for this function because it’s easy enough to use CORREL and then square the answer.

Here’s what the Excel Formula bar looks like after you fill in the RSQ Function Arguments dialog box for this example:

In terms of the dialog box, the only difference between this one and CORREL (and PEARSON) is that the boxes you fill in are called Known_y's and Known_x's rather than Array1 and Array2.

As far as calculating correlations go, there is really no need for these formulas.

You use these functions the same way you use CORREL. After you fill in the Function Arguments dialog box for COVARIANCE.P for this example, the formula in the Formula bar is

If you want to use this function to calculate r, you divide the answer by the product of STDEV.P(SAT) and STDEV.P(GPA). It’s up to you to figure out how you’d use COVARIANCE.S to calculate r. It’s unclear why you’d bother with all of this when you can just use CORREL.