Imagine a huge population that consists of just three scores — 1, 2, and 3 — and each one is equally likely to appear in a sample. Imagine also that you can randomly select a sample of three scores from this population.

In the simulation, a score was randomly selected from the population and then randomly select two more. That group of three scores is a sample. Then you calculate the mean of that sample. This process was repeated for a total of 60 samples, resulting in 60 sample means. Finally, you graph the distribution of the sample means.

What does the simulated sampling distribution of the mean look like? The image below shows a worksheet that answers this question.

In the worksheet, each row is a sample. The columns labeled x1, x2, and x3 show the three scores for each sample. Column E shows the average for the sample in each row. Column G shows all the possible values for the sample mean, and column H shows how often each mean appears in the 60 samples. Columns G and H, and the graph, show that the distribution has its maximum frequency when the sample mean is 2.00. The frequencies tail off as the sample means get further and further away from 2.00. 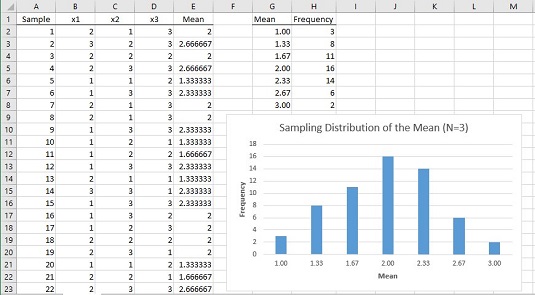 On to the sampling distribution. The mean of the 60 means is 1.98, and their standard deviation (an estimate of the standard error of the mean) is .48. Those numbers closely approximate the Central Limit Theorem–predicted parameters for the sampling distribution of the mean, 2.00 (equal to the population mean) and .47 (the standard deviation, .67, divided by the square root of 3, the sample size).

In case you’re interested in doing this simulation, here are the steps:

60 samples were used here. The quick and easy way to get this done is to select the first row of three randomly selected numbers and their mean and then autofill the remaining rows. The set of sample means in column E is the simulated sampling distribution of the mean. Use AVERAGE and STDEV.P to find its mean and standard deviation.

To see what this simulated sampling distribution looks like, use the array function FREQUENCY on the sample means in column E. Follow these steps:

By the way, Excel repeats the random selection process whenever you do something that causes Excel to recalculate the worksheet. The effect is that the numbers can change as you work through this. (That is, you rerun the simulation.) For example, if you go back and autofill one of the rows again, the numbers change and the graph changes.