Apple One For Dummies Cheat Sheet

Apple One For Dummies 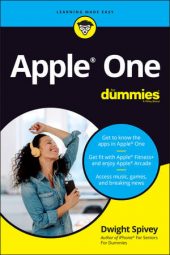 Explore Book Buy On Amazon
The Apple TV streaming device and iCloud.com are two of the ways you can access many of your Apple One services. Get the most out of your Apple TV’s Siri remote control and discover the best web browsers to use with iCloud.com, ensuring a better consumer experience.

Siri has become a cultural icon. Apple’s virtual assistant is incredibly useful on our iPhones, iPads, Apple Watches, and Macs, but it’s also a wonderful companion for your Apple TV. As a matter of fact, Siri is such an integral part of the Apple TV experience that its remote control is called Siri Remote. You can speak a command to Siri and it will perform the action you request, without having to poke around in all your apps to find a show, movie, or game.

To use Siri with your Apple TV, hold down the Siri button (microphone icon) on the Siri Remote, speak a command, release the Siri button, and then sit back and relax while Siri does the work. Here are a just a few examples of tasks you can ask of Siri on Apple TV:

And much more! Check out this page on Apple’s Support site for more information, including troubleshooting information in case Siri isn’t behaving as expected.

The Best Browsers for iCloud.com

Most of the services available with your Apple One subscription can be accessed via iCloud.com in your favorite web browser, regardless of the operating system or device you use. However, all web browsers aren’t created equal. Some are built for speed, others focus on security, and many others try to cater to specific uses or platforms. In general, the default web browser that came with your computer or device may suffice for you, but it’s always a good idea to try new things, even when it comes to the tools you use to browse the web. You may surprise yourself and find that one browser just suits you more than another, or security features in some browsers may supersede your need for speed.

Here’s a list (in alphabetical order) of what I consider to be some of the best browsers around, including the platforms they’re available for:

Note to Internet Explorer users: You may have noticed that I didn’t mention Internet Explorer in my list. That’s because, frankly, compared to those I did list, it’s a subpar browser. It’s also been replaced by Microsoft Edge in the newest versions of Windows.

Dwight Spivey has been a technical author and editor for over a decade and is currently Educational Technology Administrator at Spring Hill College. His talent for explaining technology to ordinary humans is evident in iPad For Seniors For Dummies, 12th Edition; Home Automation For Dummies; and the previous edition of this book.