Step by Step: The Empirical Cumulative Distribution Function in R

By: Joseph Schmuller and
Updated: 07-05-2017
From The Book: Statistical Analysis with R For Dummies

Explore Book Buy On Amazon
The empirical cumulative distribution function (ecdf) is closely related to cumulative frequency. Rather than show the frequency in an interval, however, the ecdf shows the proportion of scores that are less than or equal to each score.

In base R, it's easy to plot the ecdf: 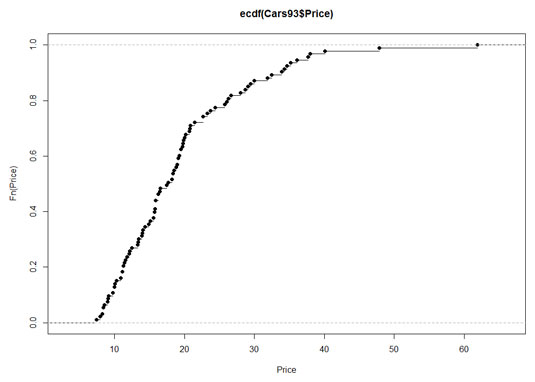 Empirical cumulative distribution function for the price data in Cars93.

The uppercase F on the y-axis is a notational convention for a cumulative distribution. The Fn means, in effect, "cumulative function" as opposed to f or fn, which just means "function." (The y-axis label could also be Percentile(Price).)

Look closely at the plot. When consecutive points are far apart (like the two on the top right), you can see a horizontal line extending rightward out of a point. (A line extends out of every point, but the lines aren't visible when the points are bunched up.) Think of this line as a "step" and then the next dot is a step higher than the previous one. How much higher? That would be 1/N, where N is the number of scores in the sample. For Cars93, that would be 1/93, which rounds off to .011.

You might prefer to use ggplot() to visualize the ecdf. Because you base the plot on a vector (Cars93$Price), the data source is NULL:

In keeping with the step-by-step nature of this function, the plot consists of steps, and the geom function is geom_step. The statistic that locates each step on the plot is the ecdf, so that's

and label the axes: 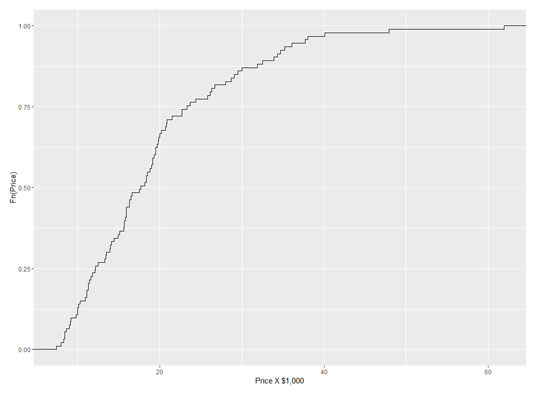 The ecdf for the price data in Cars93, plotted with ggplot().

To put a little pizzazz in the graph, add a dashed vertical line at each quartile. Before adding the geom function for a vertical line, put the quartile information in a vector:

geom_vline(aes(xintercept=price.q),linetype = "dashed") adds the vertical lines. The aesthetic mapping sets the x-intercept of each line at a quartile value.

So these lines of code 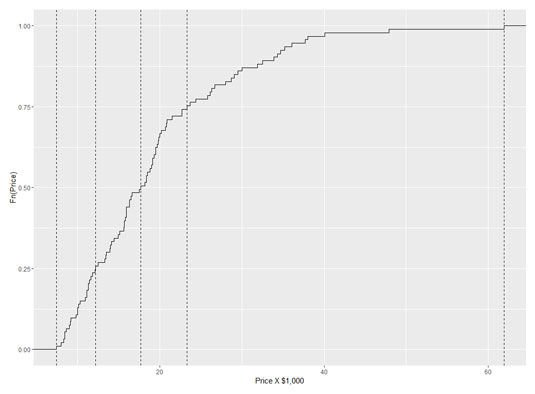 The ecdf for price data, with a dashed vertical line at each quartile.

A nice finishing touch is to put the quartile-values on the x-axis. The function scale_x_continuous() gets that done. It uses one argument called breaks (which sets the location of values to put on the axis) and another called labels (which puts the values on those locations). Here's where that price.q vector comes in handy: 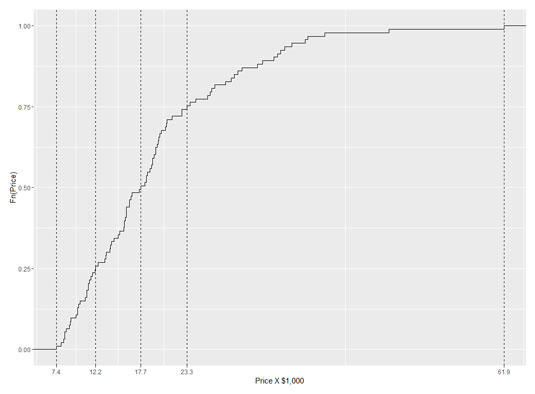 The ecdf for price data, with quartile values on the x-axis.