How to Write Comments in Your Python Code Files

Python For Kids For Dummies 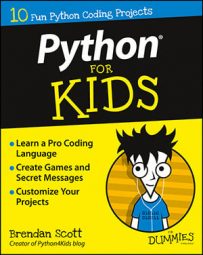 Writing comments in your Python code files is a good thing because you can communicate messages to your future self in the program text. Let's take a look at an example code file.

The first line here is called a comment. It looks like string literals because that's what it is. When Python sees a string literal in a file it ignores it! In this case, you're telling yourself that this file is just a test file, so you shouldn't be too bummed if you mess up.

You have a lot of good reasons to write comments in your code:

Brendan Scott is a dad who loves Python and wants kids to get some of its magic too. He started pythonforkids.brendanscott.com to help teach his oldest child to code. He maintains it to help other young people learn Python.