Your Guide to the Python Standard Library 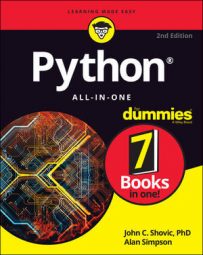 For this reason, the terms type, instance, and object are often used interchangeably. An integer is a whole number; it’s also a data type in Python. But it exists because the standard library contains a class for integers, and every integer you create is actually an instance of that class and hence an object (because classes are the templates for things called objects).

The type() function in Python usually identifies the type of a piece of data. For example, run these two lines of code at a Python prompt, in a Jupyter notebook or a .py file:

The output is: This is telling you that x is an integer, and also that it's an instance of the int class from the standard library. Running this code: Produces this output: That is, x contains data that’s the string data type, created by the Python str class. The same thing works for a float (a numeric value with a decimal point, like 3.14) and for Booleans (True or False).

The Python standard library offers a dir() method that displays a list of all the attributes associated with a type. For example, in the previous example the result