How to Stream Apple Music to Your Apple Watch

Explore Book Buy On Amazon
As you may or may not know, Apple Music is a monthly subscription service from Apple that lets you listen to more than 45 million songs. Unlike paying for and downloading individual songs or albums from iTunes, Apple Music is a streaming service, so all the songs are stored on Apple’s servers in the “cloud” for you to access from your device (as if they were stored locally). Neat, huh? Instead of “owning” the music, you’re essentially renting the songs, if you will, with your monthly fee.

In other words, it’s not an “a la carte” model, but rather a buffet-style “all-you-can-eat” approach, giving you unlimited access to many songs, with your one monthly fee. To use this feature, you must have an Internet connection. There is an option to download some Apple Music tracks to an iPhone, iPad, Mac, or PC in the event you know you’ll be without the Internet for a while.

Another part of Apple Music is an Apple Radio feature, which might introduce you to new songs through curated playlists you can stream on-demand.

Simply open the Music app on your Apple Watch and scroll up, then tap Library. You can also use Siri to play any song in the Apple Music catalog and listen to custom stations.

How to play music from your Apple Watch

Not all smartwatches let you store music on your wrist, so you do need a nearby smartphone, but Apple Watch does indeed offer this feature. After all, sometimes, you might not have or want your phone with you, such as when you go out for a jog for a few minutes. If that’s the case, why shouldn’t you listen to your favorite high-energy music to keep you pumped up?

This convenience comes with two limitations:

If you accept these caveats, follow these steps to transfer music to your Apple Watch from an iPhone: 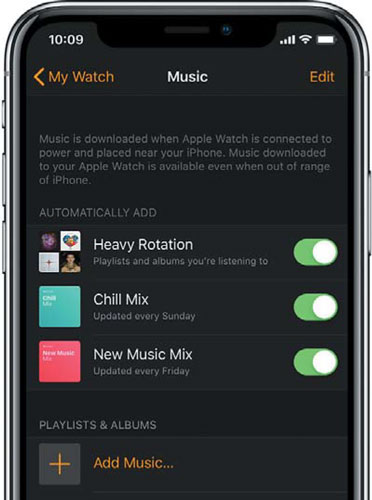 Sync music between your iPhone and Apple Watch.

Don’t worry about transferring too many tunes over to Apple Watch because Apple won’t let you go over your allotted storage of 2 gigabytes (or about 400 to 450 songs).

You need to select Apple Watch as your music source to hear music when your iPhone isn’t around.

How to remove music from your Apple Watch

If you’ve grown tired of some songs on your Apple Watch, here’s how to remove them: 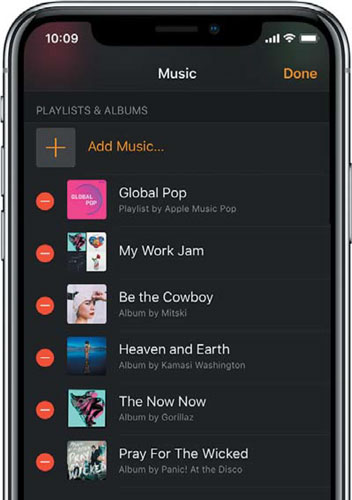 It’s just as easy to take songs off your Apple Watch as it is to add them, but both require your iPhone.

Marc Saltzman is a freelance journalist, author, lecturer, consultant, and radio and TV personality. He’s written for CNN.com and USAToday.com and appeared on “The Today Show,” “CBS Early Show,” “Access Hollywood,” and “Entertainment Tonight.” He is the host of “Tech Talk With Marc Saltzman.”