How to Shoot Videos on Your iPad

The iPad 2 was the first iPad with a camera — um, two cameras, to be more precise. The rear camera can record video up to the high-definition techie standard of 720p and at 30 frames per second (fps), or as full-motion video. Come again? That’s a fancy way to say that the video ought to play back smoothly.

The front camera can also perform at 30 fps, but the VGA (video graphics array) quality isn’t quite as good.

Apple equipped the later iPads with even better cameras. The 5-megapixel iSight camera takes terrific stills and lets you capture 1080p video, or the highest of the high-definition specifications. Another bonus is that it has built-in video stabilization, which helps compensate for a slightly jittery videographer.

Here’s how to shoot video on the iPad:

Editing what you shot

If you shot some stuff that belongs on the cutting room floor, you can perform simple edits right on your iPad. Tap the Camera Roll at the lower-right corner of the Camera app to find your recordings. Then:

This method will only let you edit footage captured on an iOS device, not video from a digital camcorder or camera, even if you sync it to the iPad.

For more ambitious editing on the iPad, consider iMovie for iPad, a $4.99 app (free to purchasers of new iOS 7 devices) that resembles a bare-bones version of iMovie for Mac computers. Through iMovie, you can export your finished video to YouTube, Vimeo, CNN iReport, and Facebook. And iMovie for iPad lets you produce Hollywood-style movie trailers, just like on a Mac.

Any video edited with the iOS version of iMovie has to have originated on an iOS device. You can’t mix in footage shot with a digital camera or obtained elsewhere. 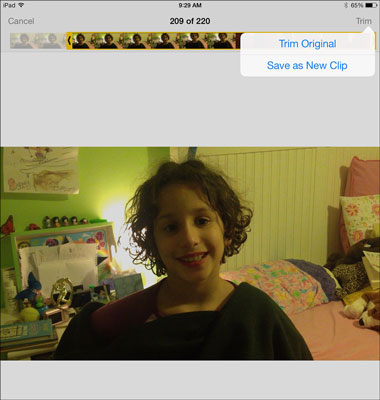 You can play back what you’ve just shot in portrait or landscape mode. And if the video is any good, you’ll likely want to share it with a wider audience.

To do so, open the Camera Roll and tap the thumbnail for the video in question. Tap the Action button, and you can e-mail the video (if the video file isn’t too large) or send it as a Message.

And there are many more options: You can save it to iCloud or share it in numerous other places, including Twitter, Facebook, Flickr, YouTube, Vimeo, and (if a Chinese keyboard was enabled) the Chinese services Youku and Tudou. You can also view your video as part of a slideshow or, if you have an Apple TV box, dispatch it to a big-screen television via AirPlay.

Dwight Spivey has been a technical author and editor for over a decade, drawing on his talent for explaining technology to ordinary humans. He works as an educational technology administrator at Spring Hill College in Alabama.