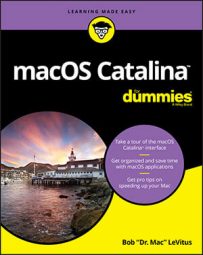 Explore Book Buy On Amazon
Whether you’ve purchased a new Mac with macOS Catalina pre-installed or you’ve upgraded from a previous version of macOS, you’ll find that Catalina makes your Mac easier to use and offers myriad improvements to make you more productive.

Get additional information on things you should never do to your Mac, a list of useful and timesaving keyboard shortcuts, a discussion of when folders are too full and when (and when not) to create subfolders, recommendations for backing up data, and a short discussion of Apple devices and continuity between them.

What not to do with Yyur Mac running Catalina

Treat your Mac and macOS Catalina with care. To keep your work and leisure projects safe, never do any of these things with your Mac:

If you’re using a laptop, you can usually get away with pulling the plug while it’s running because the battery automatically kicks in. The only caveat is that if your battery is totally depleted, damaged, or missing entirely, you could suffer directory damage or data loss by pulling the plug. Just use the Shut Down command, and you’ll sleep well.

Make your work go faster with these macOS Catalina keyboard shortcuts. Print this chart and refer to it while using macOS Catalina.

Tabbing around Catalina’s Save and Save As functions

That’s because the file list box, the search box, the sidebar, and the Save As field are mutually exclusive, and only one can be active at any time. You can always tell which item is active by the thin blue or gray border around it.

When you want to switch to a different folder to save a file, click the folder in the sidebar or click anywhere in the file list box to make the file list active. The following tricks help you get a hold on this whole active/inactive silliness:

Creating subfolders in macOS Catalina . . . or not

How full is too full? When should you begin creating subfolders in Catalina? That’s impossible to say, at least in a one-size-fits-all way, but having too many items in a folder can be a nightmare — as can having too many subfolders with just one or two files in each one.

If you find more than 15 or 20 files in a single folder, begin thinking about ways to subdivide it. On the other hand, some of your biggest subfolders might contain things that you don’t often access, such as a Correspondence 2001 folder. Because you don’t use it often, its overcrowded condition might not bother you.

Here are some tips to help you decide whether to use subfolders or just leave well enough alone:

When working in macOS Catalina, would you like to ensure that you won’t lose more than a little work no matter what happens — even if your office burns, floods, is destroyed by tornado, hurricane, or earthquake, or robbed? If so, you might want to follow the setup described here.

I am continually testing new backup solutions, so the software I use can change from month to month. I’ve tried most of the popular backup solutions and many of the more obscure ones, but before I say anything about my current setup, here is what I’m trying to accomplish (at a minimum): I want at least three (reasonably) current backup sets with copies of all my files.

I update two of them every day and keep the third somewhere offsite, such as in a safe deposit box at the bank. Every month or two, I swap the offsite backup for the latest backup from home — and then reuse the older backup disk.

Note that after I set up the following programs, they run automatically in the background with no further action on my part. Think of this as a “set and forget” feature.

Note that you can add a second or third backup disk (or more) to Time Machine if you like. Just click Select Disk in the Time Machine System Preferences pane, select the disk, and choose Use Both (or All) in the dialog that appears so that Time Machine rotates among the disks. Alas, even if you have two or more Time Machine backup disks, they’re still all stored in the same room.

One last thing: I test the integrity of each backup regularly, and so should you. It confirms that the files that I think are there are actually there, and it reassures me that the files in that backup set aren’t corrupted or damaged and are capable of being restored successfully.

Continuity is the blanket term for a set of features in macOS Yosemite or newer and iOS 8 or newer that allow you to seamlessly move between your iPhone, iPad, and Mac.

They’re a useful little quartet, but they work only with newer Apple devices. So, before you get too excited, peruse the system requirements for each feature.

Handoff and Instant Hotspot are supported by the following Mac models and require Yosemite or later:

Instant Hotspot requires one of these iDevices with cellular connectivity and Personal Hotspot service through your wireless carrier:

SMS requires an iPhone with at least iOS 8.1 and an activated carrier plan and works with any iOS device with iOS 8.1 and any Mac that supports macOS Sierra or later.

If your gear isn’t listed, Continuity isn’t going to work for you. So, assuming you have at least two or more devices that meet those requirements, here is how to put these useful features to work for you.

How to use Handoff

Handoff lets you start a document, email, or message on one Apple device and pick up where you left off on another. It works with Apple apps including Mail, Safari, Maps, Messages, Reminders, Calendar, Contacts, Pages, Numbers, and Keynote as well as some third-party apps.

To use Handoff, do the following:

To learn about all things Macintosh and macOS Mojave, hop on to the web, check out these sites, and stuff your brain with Mac information:

Disclosure: I’m proud to be a columnist at The Mac Observer, and even prouder to have been doing it for nearly two decades.