Football teams can score points in several ways — and scoring more points than the other team is the object of the game. The following sections explain each method of scoring.

A touchdown is worth six points — the ultimate goal. A team scores a touchdown, plus the loudest cheers from fans, when an offensive player carrying the ball, or a defensive player who has obtained the ball from the other team after recovering a fumble or intercepting a pass, advances from anywhere on the field and breaks the plane of his opponent’s goal line with the ball.

Breaking the plane means that a ball carrier can soar over the goal line in midair and have his efforts count for a touchdown — even if he’s hit in midair and lands back on the 1-yard line — as long as the ball crosses the plane. The figure shows New Orleans Saints’ running back Pierre Thomas scoring a touchdown in the Super Bowl. 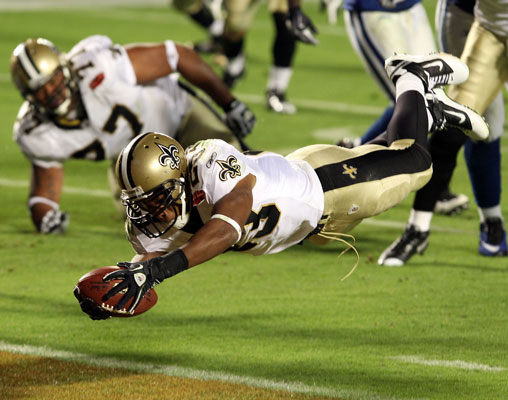 A team is also awarded a touchdown when any player who’s inbounds catches or recovers a loose ball behind his opponent’s goal line. This sort of touchdown can occur on a kickoff, a punt, or a fumble (when a player drops the ball).

A try for an extra point, also known as a point after touchdown (PAT), is attempted during the scrimmage down that’s awarded after a touchdown. The extra point is successful when the kicker kicks the ball between the uprights of the goalpost and above the crossbar, provided that the ball was snapped 2 yards away from the opponent’s goal line (or 3 yards away in high school and college). Teams almost always make their extra point attempts — especially beyond the high school level — because the kick is a fairly easy one.

When a team is feeling particularly confident — or desperate — it might attempt a two-point conversion after scoring a touchdown. Two-point conversions, which were added to the NFL for the 1994 season, have always been a part of high school and college football.

The offense gets the ball on the 2-yard line (the 3-yard line in high school and college) and must advance the ball across the goal line, or break the plane, as if scoring a touchdown. In the NFL, the try (called a conversion attempt) is over when the officials rule the ball dead or if a change of possession occurs (meaning the defense intercepts a pass or recovers a fumble). In college, the defensive team can return a fumble or interception to its opponent’s end zone and score two points.

A field goal, often the consolation prize for an offense that tries to score a touchdown but stalls within its opponent’s 30-yard line, is worth three points. A team scores a field goal when a kicker boots the ball entirely through the uprights of the goalpost without the ball touching either the ground or any of the offensive players. The kicked ball must travel between the uprights and above the crossbar of the goalpost.

You get the distance of a field goal by adding 10 yards (the distance from the goal line to the end line where the goalposts are placed) to the yard line from which the ball is kicked. Or simply add 17 to the number of yards that the offense would have to advance to cross the goal line (the extra 7 yards represents the typical distance of a snap for a field goal attempt). For example, if the offense is on its opponent’s 23-yard line, they’re attempting a 40-yard field goal.

For the offensive team, a safety is bad thing. The other team gets not only two points but also the ball in good field position. Normally, teams kick off from the 35-yard line. Having to punt from the 20-yard line allows the other team to advance the ball further up the field after the punt.

Frankly, a safety is embarrassing to the offense, and offensive players will do just about anything to prevent a safety. Besides being tackled in the end zone, here are other instances when a safety is awarded: