The Coin Toss and Kickoff in American Football

Every American football game starts with a coin toss. Selected members of each team (called captains) come to the center of the field, where the referee holds a coin. In the NFL, the coin toss is restricted to three captains from each team. In college football, four players may participate. However, only one player from the visiting team calls heads or tails, and that player must do so before the official tosses the coin into the air (hence the name coin toss).

If that player calls the toss correctly, his team gets to choose one of three privileges:

The team that earns the right to receive the ball gets the ball via a kickoff. To perform this kickoff, the kicking team’s placekicker places the ball in a holder (called a tee, which is 1 inch tall in the NFL and 2 inches tall in high school and college) on his team’s 30-yard line (NFL and college) or 40-yard line (high school). The kicker then runs toward the ball and kicks it toward the other team. This figure shows how teams typically line up for a kickoff in the NFL. 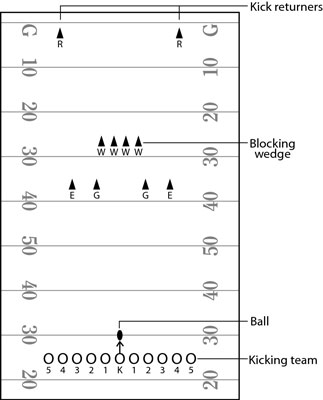 At the far end of the field from the kicker, one or more returners from the other team await the kickoff. The returner’s goal is to catch the ball and score a touchdown or run the ball as far back toward the opponent’s goal line as he can. After the return is complete, the first set of downs begins.

Martin Signore is a screenwriter and interactive game writer/designer. While working in Los Angeles, Martin founded the Hollywood Football League with his friends and coworkers. Many years, trophies, and leagues later, he admits to being a fantasy football expert and addict.