How to Get into the Shotgun Formation in Football

In football terminology, formation describes how the players on offense line up before the ball is snapped. As football has evolved, so have the formations. The shotgun passing formation was devised by San Francisco 49ers head coach Red Hickey in 1960.

Hickey feared the Baltimore Colts' great pass rush, so he had his quarterback, John Brodie, line up 7 yards behind the line of scrimmage (see the figure). Hickey figured that Brodie would have more time to see his receivers and could release the ball before the defensive rush reached him. The strategy worked, and the 49ers upset the mighty Colts. 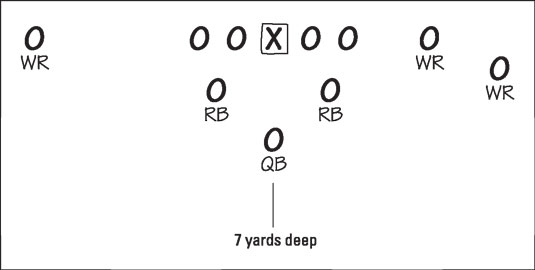 The shotgun formation puts the quarterback 7 yards behind the line of scrimmage.

Despite its versatility, the shotgun formation has a couple downsides:

Teams need a quick-thinking quarterback who can set his feet quickly in order to use the shotgun formation effectively.